His three-year defamation battle may be over, but Hardeep Singh still faces an uphill battle to recover his costs

There is increasing evidence that both scientific debate and investigative journalism is being deterred by the threat and cost of having to defend libel actions. This is a matter of serious concern to all those who believe that a free press is an essential component of a free society.

Every year approximately 200 libel writs are issued here in Britain, but only around five cases go to trial; most settle out of court. Little wonder as the cost of defending can be crippling to say the least. This does not take into account the thousands of unaccounted threats sent to writers in accordance with the pre-action defamation protocol.

In 2007 I was sued for an article entitled “Cult divides Sikh congregation in High Wycombe” published in a Birmingham-based newspaper called the Sikh Times. I stood accused of defaming the claimant, a self-proclaimed holy man, of being an “accused cult leader” who had caused a divide amongst members of the British Sikh community. The claimant purported to belong to a newly invented strand of the faith which he described in many ways “the Nirmal Bhekh” or “Nirmal Sikh Faith”, deviating from mainstream Sikh doctrine.

The editor of the publication capitulated early on and printed an apology, leaving me to defend the £150,000 writ all by myself. In retrospect, I could have also chosen to take the path of least resistance and backed off with a grovelling apology, retraction or offer of amends. You may well ask then, why did I choose to fight and go through what I can best describe as three years of living hell? Do you have to be unhinged to fight libel, you may well ask?

I chose to stand for my right of freedom of speech, having uncovered what I felt was a malignant limb on the body of the world’s fifth largest religion. Furthermore I wanted to show how Britain’s libel laws are simply not working when an Indian national (unable to speak English) with no ties to this country whatsoever, instructs a Leeds-based law firm from the comfort of his ‘abode’ in the leafy northern state of Punjab, India.

“Mr. Maharaj” as the Independent called him, had no assets in this jurisdiction and therefore litigated freely on multiple CFAs, knowing all along that even if his claim was unsuccessful it would be difficult to enforce a cost order against him in India. It highlighted the conundrum of a controversial debate: misuse of a CFA can lead to a “chilling effect”, and conversely my access to justice would have been impossible without CFAs with Sahota Solicitors and Carter-Ruck thereafter.

On 1 February 2011 Lord Justice Sedley ordered the appellant pay £250,000 into court within a fortnight. His legal team had surprisingly abandoned the case the day before the hearing on the grounds they had not received any instruction from their client.

The appellant failed to come up with the funds by the expiration of the order by the Court of Appeal for security this week. My nightmare, therefore, has almost ended, but with the prospect of yet another battle ahead to recoup costs in India.

If we are to be successful, I will incur further costs of up to £20,000 and it may take another six to seven years to get back almost £100,000 pounds in costs defending the libel action.  My case was originally “stayed” by Mr. Justice Eady in May 2010 on the well established point of law, that secular courts should not just be religiously neutral, moreover they should not enter into issues of religious doctrine at all. In the judgment Mr. Justice Eady cited a number of legal authorities including Mr Justice Gray in Blake v Associated Newspapers and Mr Justice Munby in Sulaiman v Juffali; in the latter it is asserted.

“Religion … is not the business of government or of the secular courts. So the starting point of the law is an essentially agnostic view of religious beliefs and a tolerant indulgence to religious and cultural diversity. A secular judge must be wary of straying across the well-recognised divide between church and state. It is not for a judge to weigh one religion against another. All are entitled to equal respect, whether in times of peace or, as at present, amidst the clash of arms”.

Lord Justice Laws concurred, giving an order on 30 June 2010 refusing permission of appeal in writing to the appellant asserting: “I consider Eady J. was right for the reasons he gave”.

A three-year chunk of my life has been eroded away and it has been hideously expensive, torturous and stressful; leaving me with symptoms that could be best described as post traumatic libel syndrome.

Defending a libel action is a bit like being Ann Widdecombe taking the floor on Strictly Come Dancing: you have to get to grips with the raunchy rumba, whilst perfecting a sultry samba; in other words it’s a real challenge and you need versatility, an indomitable spirit and reservoirs of untapped energy to survive the rigours of the cavorting competition. Like Widdecombe, I was definitely the wildcard, against a “Holy man” with comparatively infinite resources and political patronage in India. 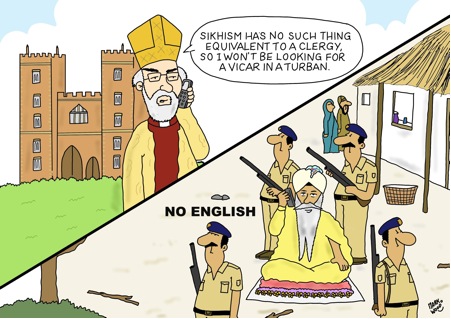 In March 2009, during the second year of my ordeal, I had the honour of attending a bilateral interfaith dialogue at Lambeth Palace. In his keynote opening address, the Archbishop of Canterbury, Dr. Rowan Williams, touched on the assumptions of comparable structural hierarchies in disparate faith groups and how they resulted in perceived lines of accountability within faith communities.

He asserted that Hinduism or Sikhism does not have an equivalent system to the Clergy, as in Christianity, so he “would not be looking for a vicar in a turban”.

The ecclesiastical wisdom of the Archbishop’s statement was highlighted, in retrospect, by the ill-informed comparison given by the counsel for the prosecution in pleadings in His Holiness vs. Singh. At an interim hearing overseen by Mrs. Justice Sharpe in February 2010, the counsel asserted:

“It is people like this defendant who are choosing – choosing – because they are not compelled to – to make extremely offensive remarks about the Third Holy Saint.  If we flip it around, most people of ordinary sensitivity would regard it deeply offensive in another jurisdiction if somebody said that the Archbishop of Canterbury was an imposter and a fraud.”

Somehow I can’t see the Archbishop ever issuing a libel writ against someone exercising their right to free speech.

Hardeep Singh is a freelance journalist and broadcaster and the Press Secretary for the Network of Sikh Organisations. He is one of 52,000 signatories at www.libelreform.org

One response to “Post-traumatic libel syndrome”