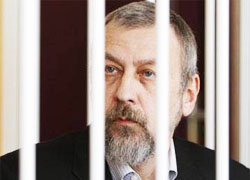 The 57-year-old former diplomat was reported to have said “take care of my family” as he was led from the court. Attempts have been made to take Sannikov and Khalip’s young son, Danil, into state custody.

In an earlier statement in court, Sannikov claimed he had been tortured while held in the Belarusian KGB’s notorious “Amerikanka” detention centre.

Mike Harris, Public Affairs Manager of Index on Censorship said: “The imprisonment and torture of presidential candidate Andrei Sannikov is Europe’s shame. Belarus is degenerating to its Soviet past, Sannikov was jailed simply for attending an opposition rally. His wife is also on trial for attending this protest and the government attempted to take his three- year-old son into care.”

He added: “Europe must use all tools at its disposal including stopping Western banks and the IMF financing the regime. Putting presidential candidates in jail in Europe in 2011 is not acceptable.”

In his final speech before the verdict former presidential candidate Andrei Sannikov said: “I love my family more than life. I love Belarus. I love freedom very much. I know that my family and all the people of Belarus will be happy when we become free, but this is impossible without law and order.”