PAST EVENT: Index on Censorship at political party conference season 2011

Index on Censorship will be at all three of the main UK political parties’ conferences speaking about press freedom in light of the phone hacking scandal, recent concerns over privacy law and super-injunctions and our on-going Libel Reform Campaign.

This year, the British political class has looked again at media regulation – with their relationship with the media, in turn, coming under increasing scrutiny.

Alongside the Hacked Off campaign, and English PEN, we’ll be joined by Hollywood actor Hugh Grant and Guardian editor Alan Rusbridger, at three events across the conference season. 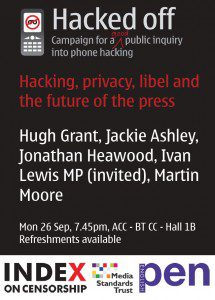