Members of the IFEX-TMG gathered in Tunis for World Press Freedom Day to mark the launch of four new initiatives to support Tunisian rights to freedom of expression, which remains under threat despite the gains of the past year.

The new work includes a literary anthology edited by the president of PEN Tunisia Naziha Rejiba, a training manual on online advocacy, a workshop for cartoonists, and a national newspaper and billboard campaign championing free expression rights as Tunisia’ Constituent Assembly continues to negotiate a new national constitution.

With hundreds of press freedom campaigners in Tunis alongside the IFEX-TMG to attend UNESCO’s annual World Press Freedom Day conference, the timeliness of these events was underlined by the sentencing of two young Facebook users to lengthy prison sentences and the fining of the head of a TV station for broadcasting the award-winning film Persepolis.

“Things have improved since the fall of the old regime, but there’s no question that the right to freedom of expression in Tunisia is not yet secure or safe,” said Rohan Jayasekera from IFEX-TMG member Index on Censorship.

The anthology, Fleeting Words, edited by Rejiba, the veteran dissident best known as ‘Om Ziad’, is published in partnership between IFEX-TMG, PEN Tunisia and Atlas Publications. Now available in Arabic, French and English editions will be published in June.
The IFEX-TMG also launched a training manual on online free expression campaign strategy developed by the IFEX-TMG member, the Arabic Network for Human Rights Information (ANHRI), with local partner, the Tunisian Centre for Freedom of the Press (CTPJ). This follows a series of training workshops, with the two most recent held in Sidi Bouzid and  Tunis.

This week also sees the launch of a major multi-media campaign in support of free expression rights developed in partnership with the Tunisian online media group Nawaat.org. Using 75 street billboards and adverts in national print and broadcast media, it will be seen by hundreds of thousands of Tunisians across the country. 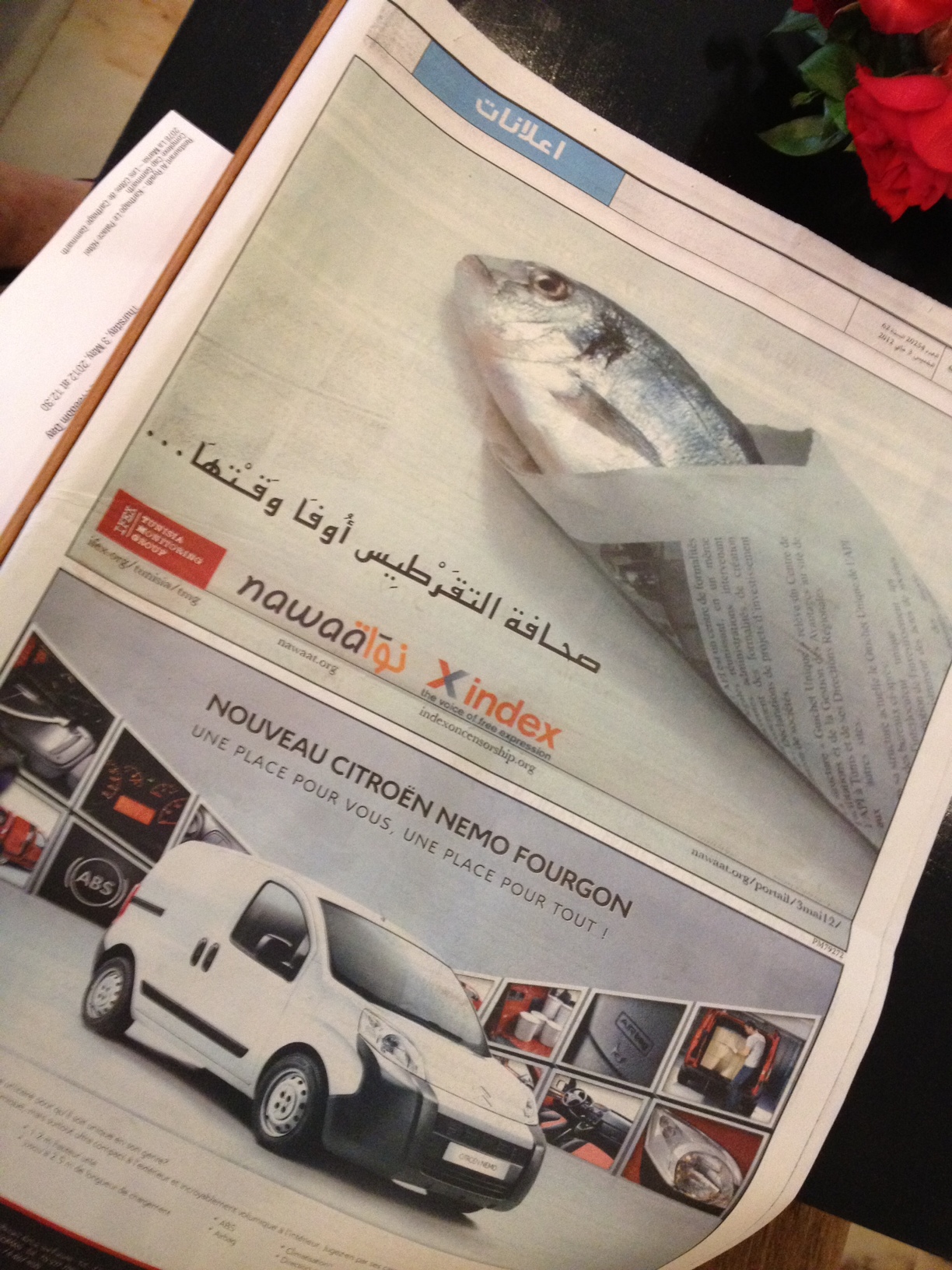 Sixteen digital and ink cartoonists from across Tunisia and the region, as CRNI Executive Director Dr Robert Russell put it, “all on the cutting edge of free speech,” gathered to exchange techniques and experiences.

The initiatives are part of the IFEX-TMG project Monitoring & Advocacy in Support of Independent Human Rights Defenders in Tunisia (2010-2012), managed by Index on Censorship and supported by the European Commission and Oxfam Novib.

The need for continuing work in the sector was underlined by the prosecution of Nabil Karoui, director of privately-owned Nessma TV for blasphemy and disturbing public order. The charges followed the station’s screening of the animated film Persepolis in October 2011. Karoui was fined 2,400 Tunisian dinars (961 GBP) on the charge of disturbing the public order, after protesters stormed Nessma TV.

“That Nabil Karoui avoided jail is not cause for celebration, the case should not have been brought to a court of law to begin with,” said Virginie Jouan, IFEX-TMG Chair.

The IFEX-TMG also expressed concern about the sentencing of Ghazi Ben Mohamed Beji and Jabeur Ben Abdallah Majri to over seven years in prison after Beji posted an online manuscript said to be critical of the Prophet, and Mejri reposted some of it.

5 responses to “Free expression in Tunisia 18 months on”