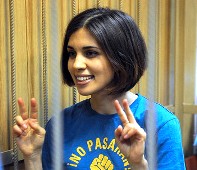 Three members of Russian punk group Pussy Riot have had their detention extended by a further six months by a Moscow court, reports say [ru]. Maria Alekhina, Nadezhda Tolokonnikova and Ekaterina Semutsevic will remain in jail until at least January 2013, with their detention already being extended from 24 June to late July. The trio were arrested in March and face charges of hooliganism for allegedly staging an anti-Putin performance in Moscow’s Christ the Saviour Cathedral in February. If convicted they face up to seven years in prison.

Pussy Riot spoke to us exclusively in May, read the interview here.