With the opening of the Pussy Riot trial in Moscow this week, Elena Vlasenko explains why the feminist punk collective is a threat to the church-state axis of Putin’s Russia

The destiny of Pussy Riot members Nadezhda Tolokonnikova, Maria Alekhina and Ekaterina Samutsevich has merged with the future of Russian democracy.

If they beat the charge the civil society which raised its voice against Vladimir Putin in December 2011 will be considerably emboldened.

The question is, what is it about these women, that made them — not Mikhail Khodorkovsky, mothers of Beslan hostage crisis victims, Sergei Magnitsky’s colleagues or Chechen refugees — the reason for such optimism? What exactly made people think Pussy Riot are most likely to trigger change? 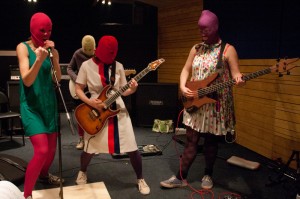 The rise of the Religarchy

The answer lies in the beginning of 2000s, when Russian intellectuals began exchanging their independence for what they thought was stability, and thereby lost their right to establish moral standards. The same happened to one of the biggest institutions, the Russian Orthodox Church.

It is telling that two church patriarchs — Kirill and his predecessor Alexy II — received honorary doctorates from Russian Academy of Public Service under the president of the Russian Federation. The Church’s merger with the State was sealed, and the evidence of that merger is clear:

The Church has traditionally called LGBT people “sick”, echoing the opinion of the Moscow mayor and his counterparts in the rest of the country.

The Church has started a campaign of taking ancient icons out of national museums. The Ministry of Culture, for exampe approved patriarch Kirill’s wish to take a fourteenth century Virgin Hodegetria icon from the Russian Museum in St Petersburg to a new church built by a Russian entrepreneur.

The Church supported establishing radical orthodox nationalist movements, which complied with the government’s youth policy. Most of the activists, whose activities these days boil down to beating and trolling Pussy Riot supporters and regularly protesting against abortions, are publicly hailed by archpriest Vsevolod Chaplin — the head of Synodal department for church and society’s relationship and one of the most influential church bureaucrats. The pro-Kremlin youth movement Nashi has been using the same aggressive methods against those orthodox nationalists hate: rights activists, journalists and artists.

The Church has supported groups persecuting modern artists, in line with the government authorities using anti-extremism legislation to silence Putin’s regime critics. One of the most remarkable examples happened in 2011, when the court labelled a picture of the sermon on the mount — with Mickey Mouse instead of Jesus Christ — extremist. This was one of the paintings of a Forbidden Art exhibition which took place in 2006. The exhibition organisers, Andrey Erofeev and Yuri Samodurov, were accused of incitement to religious hatred, found guilty and fined after religious activists applied to prosecutors, saying the exhibition insulted them.

More controversial stories about Russian Orthodox Church have emerged over the past year. In April 2012, a Moscow arbitration tribunal ruled that Childhood, a rehabilitation centre for gravely ill children in the Moscow area, had to give away one of its two buildings to a convent, which submitted personally to patriarch Kirill.

The merger of the Church and State has even left a trace in Russian language. Philosopher Mikhail Epstein has been organising “word of the year” contests on the Russian-language web. One of the most popular neologisms was the word “religarchy”, which, according to Epstein, showed how close religion and the oligarchy — the actual power behind president Vladimir Putin — had become.

Individual artists criticised Putin’s authoritarianism, but none of them really dared to protest against the Church’s attempts to help the government control people’s minds.

Russia still hasn’t got its own Richard Dawkins, ready to challenge religion. Between the church’s controversial activities and inteligentsia’s lack of activity in protecting the secular state, the social soil was fruitful for radical protest.

When patriarch Kirill supported Vladimir Putin in the run-up to presidential elections in March 2012, no one was shocked, or inclined to protest such scandalous bias. No-one except Pussy Riot — a new protest group yet to become famous, or to learn how to stop singing out of tune.

While the Church was quite freely merging with the State, future Pussy Riot members participated in different civil initiatives, from situationist arty Voina projects to protecting the Khimki forest.

They judged  the victories chalked up to the popular theory of small deeds to be  insignificant. This belief, popular among Russian opposition activists abandons attempts to influence government, and instead focuses on small, local changes.

They witnessed how indifferent many intellectuals had become towards the absurdity of the Russian political system and judged opposition leaders to be. They were political sensations a mere three months after Moscow journalists first heard the name Pussy Riot.

Pussy Riot appeared when two contexts collided: the one of the Church merging with the State and the other of Russia being a country of women.

Outside Moscow and the large Russian cities, the country consists of hundreds of small cities, which are all the cities of women, just like in Fellini’s movie. Women in these places run the most important institutions: schools, universities, museums and their families, managing to feed and dress their children with the USD 80 a month their husbands earn as drivers and builders in the big cities western journalists travel to.

It was quite likely that women would initiate a political scandal. There has been a false start in the mid-2000s when businesswoman Evgeniya Chirikova created a movement to defend the Khimki forest and gathered 5000 people — one of the biggest rallies before mass protests for fair elections — in the centre of Moscow.

Since the arrest of the three band members the group has been supported by international musicians like Red Hot Chili Peppers, Franz Ferdinand, Sting and Faith No More. Victorious slogans claim “Putin is afraid of Pussy Riot”. But the number of protesters near the court has not exceeded 300 people. Even Mikhail Khodorkovsky — an oligarch in a country of the poor — gathered at least 1,000 people outside Khamovnichesky court. The lack of solidarity in Russia is perhaps the most important context of the emergence of Pussy Riot.

The scant attention paid to Pussy Riot in Russia is the responsibility of Russian intellectuals, who, during 12 years of Putin’s regime did little to prevent violations of the right to free expression. Censorship dominates Russian television, the judicial system has became more and more corrupted and people have not had access to free information nor efficient propaganda on how to fight for it. For 12 years people have not been able to stand up for themselves, having had no back up from the Moscow elite. No wonder the majority of them aren’t supporting Pussy Riot: they are not used to protecting their own freedom.

Pussy Riot are paying for the intellectuals’ inactivity in taking care of their own people, those who live in numerous cities of women and have no-one to protect them from authoritarian state.

Support actions near the court building are often visited by poet Lev Rubinshtein and artist Andrey Bilzho. Every time they sadly and ironically note that all their counterparts must be on vacations: that must be why they don’t show up to support the women of Pussy Riot, not because they don’t care.

Pussy Riot alone may not trigger a revolution in Russia, where art, punk rock and political debate exist only in Moscow and a few other cities. But their case should stir the conscience of Russian intellectuals, who may yet define the revolutionary programme.