The International Day to End Impunity is a campaign to highlight the necessity of protecting press freedom around the world, says Padraig Reidy

This article was originally published at Comment is Free

On 23 November 2011, Azerbaijani writer Rafiq Tagi died. Tagi had been a consistent critic of conservative Islam and of the regime in neighbouring Iran. His opinions had earned him a conviction for inciting hatred and a death sentence from Iranian Ayatollah Fazel Lankarani. He survived prison, but was a marked man. He met his end in hospital, four days after being stabbed by an as yet unidentified killer. The son of Lankarani praised Tagi’s killer, congratulating him for standing up for Islam and thwarting “Zionism”.

Rafiq’s case in itself would be enough to make 23 November a day of remembrance for journalists. But the date echoes an even grimmer attack on the free press. In 2009, 32 journalists and media workers were slaughtered in the Philippines, in what is known as the Ampatuan massacre. The journalists were ambushed on their way to cover the filing of the candidacy of a local politician, Esmael Mangudadatu, for upcoming elections. Mangudadatu had feared he would be attacked and hoped the presence of the media would protect him. As yet, no one has been convicted of the single greatest slaughter of media workers in history. 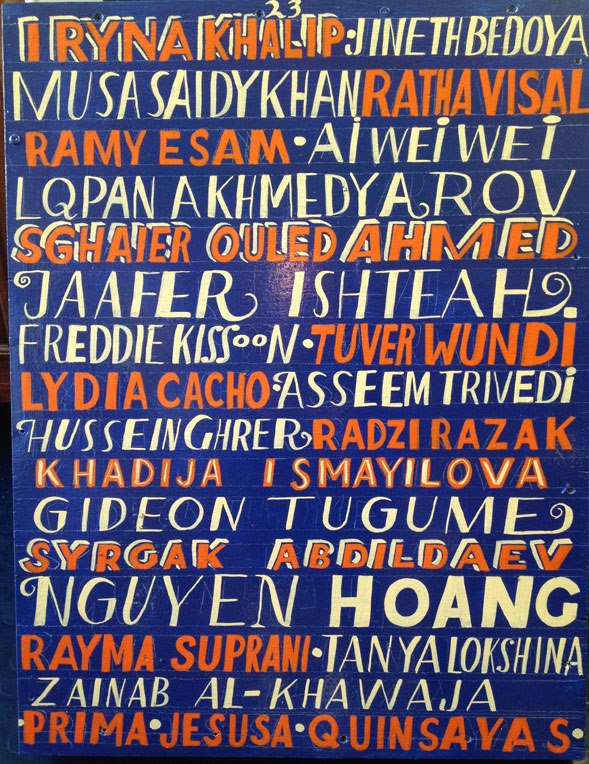 This is why 23 November has been declared International Day To End Impunity. Started in 2011, the event highlights the chilling fact that from Gaza to Guyana, people who decide to use the most direct form of censorship — physical attacks on journalists, activists and artists, can reasonably expect to get away with it. Free speech suffers while the censor goes free.

This year, the campaign to highlight this issue has chosen 23 figures from around the world who have faced intimidation, imprisonment and attacks. A small sample of that sample: Indian cartoonist Aseem Trivedi faces sedition charges for a drawing suggesting some Indian politicians are corrupt. Belarusian journalist and activist Iryna Khalip faced years of intimidation for criticising the human rights record of Europe’s last dictatorship. She is now barred from leaving her country and under constant police surveillance. Mexican investigative reporter Lydia Cacho has been forced to flee her country after her work uncovering sex trafficking earned her death threats. Bahraini human rights activist Zainab al-Khawaja has been shot with a tear gas canister and has seen 12 separate criminal cases brought against her this year – all for daring to call for democracy in the Gulf kingdom.

And then there is Ai Weiwei. Amid all the Gangnam and the glamour of the world’s most famous living artist, it is easy to forget that this is a man who has faced beatings and house arrest merely for encouraging his fellow Chinese citizens to question the authority of the Communist party.

Ai’s influence has led to new alliances between artists and activists, earlier this week, Anish Kapoor pulled together his own Gangnam-style pastiche to highlight censorship, and to mark International Day to End Impunity, another British artist, Bob and Roberta Smith, has joined with Index on Censorship to create an exclusive painting displaying the names of the 23 figureheads of the anti-impunity campaign.

But concern for free speech spreads beyond artists and activists. As the web has given us all the power to publish and broadcast, in the UK we have seen ordinary people punished for saying the “wrong” thing on Facebook and Twitter: Matthew Woods, Azhar Ahmed and Paul Chambers are just some of the people who have found themselves at the sharp end of censorious laws. Abstract arguments about free speech have a sudden urgency when we realise any one of us could find ourselves on trial for a strongly expressed opinion or a badly phrased joke. The Crown Prosecution Service (CPS) is soon to publish interim guidelines and a public consultation on social media prosecutions, and we can only hope free speech is paramount in its concerns.

Meanwhile, the findings of the Leveson Inquiry, due to be released next week, may well have damaging implications for the UK’s free press, punishing good journalists as well as those who fall short.

As we prepare for vigorous debates about the press and the online world, it’s worth remembering that free speech is hard won and all too easily lost.

Padraig Reidy is news editor at Index. He tweets at @mepadraigreidy