South Africa’s Right2Know Campaign (R2K) is “Camping out for Openness” outside parliament in Cape Town this week as deliberations over the draconian Protection of State Information Bill draw to a close.

The National Council of Provinces, the second house of parliament, is due to adopt the bill by the end of November. The bill is ostensibly aimed at instituting a long-overdue system to regulate access to government documents.

However, despite persistent appeals from, among others, luminaries such as Nobel Laureate Nadine Gordimer, the Secrecy Bill’s system of classification and declassification has not been couched in the country’s constitutional commitment to an open democracy and the free flow of information.

Instead it opens the door to the over-classification of state information while instituting harsh punishments for the possession of classified information, undermining basic citizenship rights.

Pressure from civil society, led by the R2K Campaign, produced limited concessions this year. One of the most pertinent demands was to include a public interest defence clause to ameliorate the anti-democratic effects of the bill. The ruling African National Congress (ANC) eventually conceded by allowing a clause enabling a public interest defence, but only if the disclosure revealed criminal activity. This has been criticised as an unreasonably high threshold. 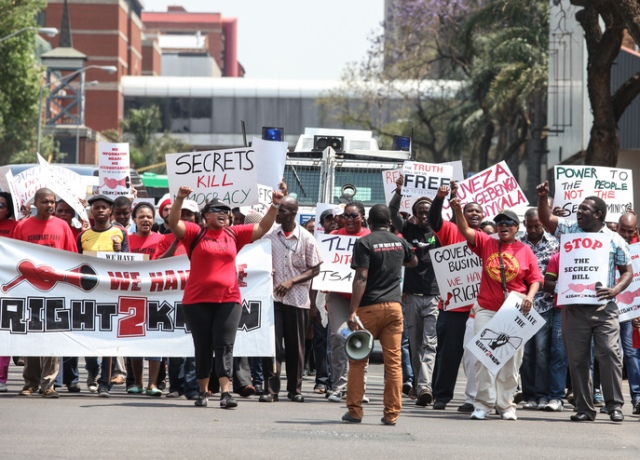 The ANC this month backtracked on two other key concessions, as pressure from state security minister Siyabonga Cwele on ANC parliamentarians seemingly paid off:

Cwele’s predecessor, Ronnie Kasrils, this week  addressed the R2K camp outside parliament, distancing himself from what he deemed the “devious” and “toxic” bill. While he was minister, he withdrew the 2008 version of the bill after a similar outcry about its lack of constitutionality.

According to R2K, the other remaining problems with the Secrecy Bill include:

Parliament’s engagement with the bill, which started in July 2010, has been characterised by Orwellian “doublethink”, as exemplified in Cwele’s declaration that “protect(ing) sensitive information … is the oil that lubricates our democracy and we have no intention — not today, not ever — to undermine the freedom we struggled and sacrificed for all these years”.

R2K has vowed to continue pressuring parliamentarians to replace the Secrecy Bill with a law “that genuinely reflects a just balance between the public’s right to know and [the] government’s need to protect limited state information”.

South Africa’s Secrecy Bill: A threat to press freedom or an awakening?