Free speech in Tunisia will continue to remain in jeopardy as a new year kicks off.

During the next few months, the National Constituent Assembly (NCA) is scheduled to adopt Tunisia’s new constitution. Last December, the NCA published a second draft constitution which guarantees the right to free speech and prohibits prior censorship. Yet a vague and repressive legal framework created by former President Zeine el-Abidin Ben Ali to silence dissident voices is still in place, and free speech advocates remain concerned over Islamist vows to criminalise blasphemy. 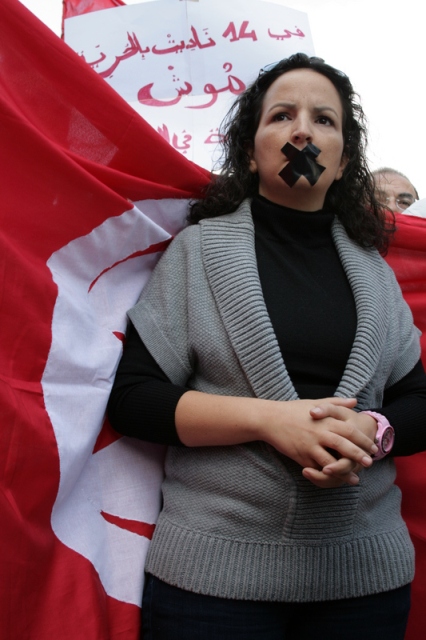 Although Ben Ali’s autocratic rule ended almost two years ago, his legacy remains on the books. Ben Ali-era laws represent a serious threat to free speech. Last year, the public prosecutor’s office used Article 121 (3) of the Tunisian Penal Code to take legal actions against Nessma TV boss Nabil Karoui over the broadcast of the animated film Persepolis and a newspaper director for publishing a nude photo. The article prohibits the distribution of publications “liable to cause harm to the public order or public morals”. As 2012 ended without any serious political will to amend or abolish this article and other anti-free speech laws, journalists, bloggers and artists risk facing more “public disorder” and “morality” charges.

Media executives and journalists’ unions expect that 2013 will bring an end to the legal void that characterises the audio-visual media landscape through the putting into effect decree-law 116, dated 2 November 2011.  Implementing this decree would establish an independent body tasked with organising the audio-visual media landscape in a “pluralistic, democratic and transparent manner”.

Over the last year, street attacks on free speech in the name of religion increased dramatically. This trend is expected to continue in 2013, given a staggering level of impunity. Tunisia’s current government has always expressed its condemnation of violence and its commitment to guaranteeing free speech. Yet, every time free expression comes under attack, officials turn a blind eye to the perpetrators and blame the victims. When ultraconservative protesters attacked the Spring of Arts fair last June, the Minister of Culture rushed to blame the artists for attacking Tunisians’ sacred religious symbols and vowed to take legal action against the fair’s organisers.

Last August, the ruling Islamist Ennahdha Movement, which controls 40 per cent of parliamentary seats, vowed to “legally protect the sacred” and filed a blasphemy bill. The party has already agreed to drop an anti-blasphemy clause from the new constitution after negotiations with the other two parties in the ruling coalition, the Congress for the Republic and the Democratic Forum for Work and Liberties. Will the Islamists also abandon their plans to criminalise blasphemy?