Speaking for the first time since the Associated Press announced on May 13 that the United States Department of Justice had seized two months of phone records, Gary Pruitt, president of the AP, said in an interview that the Obama administration should “rein in that out-of-control investigation.” 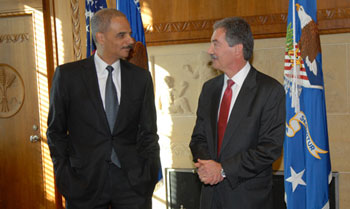 The DOJ action came after Congressional uproar over government leaks to the press. Deputy Attorney General James Cole authorized investigators to seek a subpeona for the office and personal lines — including mobiles — of AP reporters. The subpeona was carried out secretly and the AP was not given a chance to respond.

“They’ve been secretive, they’ve been overboard and abusive,” Pruitt said of the DOJ’s actions in an interview with the AP.

For its part, the DOJ has not explained why it seized the phone records, but the AP has suspected that the investigation stemmed from a May 2012 article about a foiled terrorist plot.