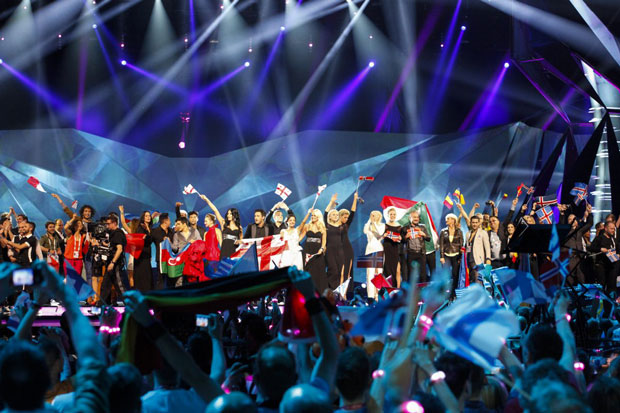 The Eurovision Song Contest gives a platform to some of Europe’s outliers on free expression. Photo: Sander Hesterman (EBU) / Eurovision 2013

Europe will once again be swept away by a sparkly hurricane of techno beats and pompous ballads, kitschy and/or traditional costumes, wind machines, pyrotechnics, heavily accented English, awkward host banter and nul points. Yes, Eurovision takes our breath away in more ways than one.

While first and foremost a showbiz spectacle, if you look beneath the layer of sequins you’ll soon discover the political tinge to the continent’s premier singing competition. From the start in 1956, it was designed as fun way of testing out new broadcasting technology. Those partial to the occasional conspiracy theory would have you believe this was also a convenient cover for pan-European satellite testing during the Cold War, which is why NATO members Turkey and Israel were invited to the party.

With the lifting of the Iron Curtain and the inclusion of the Eastern Bloc in 1990, much was said about the healing, unifying power of the contest. Since then, even more has been said about the tendency of the late arrivals to share their points amongst themselves. The UK, for instance, have been vocal about political, neighbourhood voting being the cause of their recent Eurovision failings, rather than, say, sending entries like this. And while Eurovision, somewhat censoriously, prohibits political songs that has not stopped artists from trying to get their meaningful messages across.

The most famous recent example is perhaps Georgia’s pun-tastic 2009 offering “We Don’t Want To Put In’‘, to be performed at final in — you guessed it — Moscow. They were told to change the song or drop out, and ultimately chose the latter. Krista Siegfrids, Finland’s entrant this year, has warned she might be planting a kiss on one of her female dancers in protest at her country’s failure to adopt equal marriage legislation.

Most significantly, Eurovision gives its entrants prime time access to some 800 million viewers around the world – an unparalleled platform on which to promote their nation should they choose to. Many have jumped at the opportunity, chief among them the land of fire; Azerbaijan. As 2012 hosts, the Aliyev regime poured millions of their significant oil wealth into reforming their international reputation as a repressive hereditary dictatorship. The only problem with this otherwise foolproof plan was that they forcefully evicted  people to make room for an ambitious Eurovision-inspired urban renewal project in Baku, attacked journalists covering and speaking up about it, and generally conducted their notoriously human rights abusing business as usual. Not much has changed since the party left town a year ago — only this week, the regime announced they have extended libel laws to online speech ahead of October’s presidential election.

Before that, 2009 hosts Russia attempted to dazzle Europe and the world, with a spectacular stage show in the 25,000 capacity Indoor Olympic Arena in Moscow. However, LGBT activists seized the opportunity to shine the spotlight on the country’s poor record on gay rights, attempting to stage a Slavic-wide Pride parade on the day of the final. In a clear violation of the right to freedom of expression and assembly, the parade was banned. Many of the protesters who showed up anyway, were attacked and arrested. LGBT rights remain poor in Russia, with a 100-year ban on pride parades in Moscow announced only last year. The charm offensive of last year’s singing, dancing, baking grandma entry has this year been followed by the John-and-Yoko-esque ‘What If?‘, which among other gems, contains the lyrics “Together we can make a better place/ On this little island out in space”. Meanwhile, in Russia, internationally funded NGOs have to register as ‘foreign agents’, or risk fines and prison time.

You don’t have to host to be able to host to take full advantage of the promotional platform Eurovision. Like Belarus, you can condense your message to fit the 3-minute performance slot. In 2011, the country known as Europe’s last dictatorship sent Anastasiya Vinnikova to perform the subtly named “I Love Belarus“. Somehow, it didn’t progress to the final. Maybe the rest of Europe had some trouble reconciling the country described in the song, with its “fields full of gold” and “free, friendly and young people”, with the country where you’re put in prison for pointing out that your repressive dictator is, well, a dictator.

Also in the running this year is Hungary, the country with some of the most draconian press regulation on the continent. There’s Ukraine, where the former prime minister is serving a seven-year jail sentence for what is widely recognised as politically motivated charges. In Italy, the final will be broadcast on public broadcaster RAI, one half of the TV duopoly that poses a big threat to the country’s media plurality. In Greece, financial woes have also had a pretty detrimental effect on freedom of expression. Bulgaria’s web of cosy relationships between authorities and media leaves the country without an accurate picture of itself.

Yes, Eurovision is first and foremost one of the biggest parties in the world. However, as you’re watching the spectacle unfold on Saturday, spare a thought for the Europeans who are not as free to express themselves as their fellow countrymen on stage in Malmo.