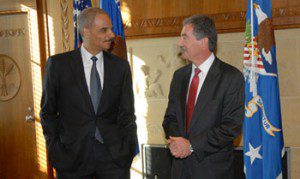 A group of organisations sent a letter on 24 May to US Attorney General Eric Holder demanding a full and transparent report on the Department of Justice’s secret investigations into journalists and whistleblowers.

“This is not just a matter of concern for journalists or newsrooms; it’s an issue at the heart of our democracy”, Aaron said in a statement.

The issue unfolded as the Justice Department sought out the source of government leaks by seizing phone records from Associated Press reporters. The records were obatined through a secret subpeona, which did not give the AP the normal right to repsond to the request. The records included office and personal lines for the reporters. The Justice Department has yet to officially inform the AP why it had sought the records.

The full text of the letter:

More than 50 journalism and press organizations recently wrote you to voice grave concerns about the Justice Department’s subpoena of telephone records belonging to Associated Press reporters and editors. We write today as a coalition of civil rights, public interest, transparency and media reform groups to express similar concerns.

Your actions have threatened press freedom — and endangered the health of our democracy. As groups working to strengthen democratic institutions and foster more open government, we are deeply concerned that your agency’s actions will hinder efforts to make government more transparent and accountable to the public.

Following years of aggressive leak investigations, the Justice Department’s overreaching subpoena of AP phone records sets a dangerous precedent. Furthermore, it appears to violate the Department’s own rules and guidelines. The impact of the Justice Department’s actions is already being felt. AP CEO Gary Pruitt reports that sources are now less willing to talk to reporters. And journalists from newsrooms large and small have noted the chilling effects on their coverage of the government.

The latest news suggests that the subpoenas were even broader than initially reported. In addition, details are emerging about a case in which the Justice Department also seized phone records from reporters at Fox News and labeled one of its journalists a “co-conspirator” for simply doing his job.

These troubling developments raise real questions about the scope of the Department’s surveillance of journalists. At a recent congressional hearing, Mr. Holder, you couldn’t recall how many times the Justice Department has subpoenaed journalists’ records. We need to know the full extent of your Department’s crackdown against journalists.

In the digital age, reporting is no longer confined to America’s traditional newsrooms. As such, threats to press freedom threaten anyone who seeks to share information about official actions using a cellphone, social media service or website. The Obama administration promised a new era of openness and transparency. Your actions, which expand secrecy and intimidate those trying to shed more light on our government, run counter to that promise.

We demand a full accounting of the Justice Department’s targeting of journalists and whistleblowers. We need this information so that we can advocate for appropriate action to protect everyone’s constitutional rights and push for stronger legal standards to protect all types of information gathering and sharing.

The Justice Department must explain its overreach in this matter. Furthermore, we call on the Department to stop violating its existing rules and cease targeting of individuals and organizations reporting on government activity.

One response to “Groups call US Justice Department actions ‘appalling’”