In Argentina, media organizations take sides: for or against the government. Graciela Mochkofsky tells the story behind the turf war between President Fernández de Kirchner and Grupo Clarín. 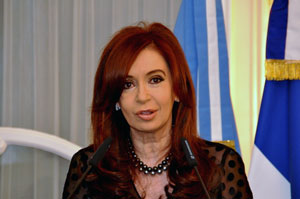 Argentina has an extraordinary number of newspapers, magazines, radio and TV stations. Greater Buenos Aires, the largest urban centre where 13.5 million people live has 18 newspapers, 37 TV channels (five analogue and 32 digital), seven news channels, and 550 AM and FM radio stations. Does this mean that it is a thriving market, with highly educated, enlightened audiences, where the development of the media is directly linked to prosperity?

No. The reason Argentina boasts a huge proliferation of media organisations is strictly political.

Many of the media outlets – indeed most newspapers – could not survive a single month with what they get from selling copies of the newspaper and sales in advertising space. The country’s 141 periodicals and newspapers sell a total daily average of 1.3m copies. Eighty-two per cent of them have tiny circulations of about 10,000 copies. Over 40 per cent sell less than 1,000 copies, according to the Asociación de Entidades Periodísticas Argentinas (ADEPA), the largest association of press companies in Argentina.

How do most of them survive? From state advertising paid by public funds or from surreptitious contributions made by entrepreneurs seeking to impose their political agenda.

In 2011, the government earmarked 1,490m pesos (about US$300m) for public advertising, according to data from the private organisation Asociación Argentina de Presupuesto y Administración Financiera Pública, which analyses public finance and official government data in Argentina.

Being that the state is a vital advertiser, successive governments have attempted to put pressure on the critical press by withdrawing or cutting its publicity disbursements from certain newspapers. It happened, for example, during the administrations of Carlos Menem (1989-1999), with Página/12, and, for the administrations of Néstor Kirchner (2003-2007) and Cristina Kirchner (2007-present), with Perfil. In 2012, the owner of Perfil, Jorge Fontevecchia, succeeded in getting the Supreme Court to rule against the government for its discriminatory use of its advertising policies. The Supreme Court ordered the government to restore its advertising in Perfil. It did not conform.

This article appears in the current issue of Index on Censorship, Fallout: The economic crisis and free expression. Subscribe.

It was also Fontevecchia who, in 1998, publicly denounced Grupo Clarín, the largest media conglomerate in Argentina with about 44 per cent of the market, accusing it of cajoling major advertisers to avoid placing ads in his newspaper. He was not the first media entrepreneur to denounce Clarín, which, because of its dominant position in the market, was able to ‘punish’ advertisers that placed ads in other rival papers. In a practice openly criticised by its peers as ‘discriminating’, Clarín has been controlling the commercial ads market for years.

In Argentina, in many cases nobody knows who the owners of media organisations are, what their ownership structure is or even how big – or small – their sales and audience are. Official circulation figures are often pumped up and not to be trusted. This lack of transparency extends to media relationships with any kind of political influence or impact. Entrepreneurs routinely strike secret deals with government officials, including the president of the nation, resulting in financial or economic benefits on one side and favourable coverage on the other. It’s a win-win situation. These agreements, never admitted publicly, bring about self-censorship in newsrooms and are characterised by manipulation, concealment, and outright lies.

In a book published in 2011, I disclosed several of these secret meetings between Grupo Clarín’s CEO, Héctor Magnetto, other media organisations, President Néstor Kirchner and public officials. Both ranking government sources and Clarín executives provided evidence that pointed to a cosy relationship. One such meeting in 2008 between President Kirchner and Grupo Clarín, for example, resulted in the opportunity for the media conglomerate to acquire shares in Telecom, one of the country’s biggest telephone companies. In 2009, the negotiation failed and the group never acquired the shares. Kirchner, in a rare television interview on 24 February 2010, disclosed that he had discussed the deal with Magnetto.

Things began to change in 2008, starting a long process that ended in a declaration of war. For the last four years, media organisations and journalists have been in the middle of a virulent public debate rarely seen in this country. It is a conflict that has permeated daily life, creating a national divide. It started when the Kirchners decided to wage war against Grupo Clarín and other newspapers, magazines, TV channels and cable networks, along with many other companies. Since then, media organisations have taken sides: for or against the government. Both sides depict the opponent as the personification of evil. Grupo Clarín, together with other national and international organisations, claims President Cristina Fernández de Kirchner is seeking to muzzle the independent press, stifle freedom of expression and put a stop to criticism. The government and its many supporters respond with the argument that it is the corporate media, especially Clarín, who are trying to hurt democracy and plurality.

The polarisation is such that it has become very difficult to find independent observers able to capture nuances and explain the situation in all its complexity. To understand it, you have to examine the recent history of the relationship between the press and those in power.

Until 1983, Argentina suffered several military dictatorships, during which more than 100 journalists were ‘disappeared’ (a euphemism for kidnapped and assassinated) and many magazines and newspapers were expropriated or closed down. Traditional newspapers, some of them centenarian, lived through these dictatorships without difficulties, or by agreeing to partner with military governments, supporting them enthusiastically in some cases – even backing their mass killings and disappearances. Some of those newspapers are still active today.

But it is also a country with a fertile journalistic tradition that has produced brilliant journalists and has become a model for reporting in the Spanish language throughout the world. In the 1990s, for example, we saw the birth of a vigorous investigative journalism wave that held the government and the political power to account. The turning point was the creation of Página/12, a newspaper that exposed rampant corruption in the public sector during the government of President Carlos Menem. It was a golden age for journalism.

All major polls revealed that journalism was regarded as the most prestigious national institution, above the Catholic Church, teachers and, of course, politicians.

This period also saw the beginnings of heavy concentration in media ownership. Powerful multimedia conglomerates were created, Grupo Clarín being the most powerful – economically and politically – of them all. Then came 2001 and an economic, political, social, cultural crisis – the worst in decades. Politicians, but also journalists and the media in general, were casualties of the crisis and lost public credibility. The government fell, Argentina defaulted on its foreign debt; there were riots, high unemployment and a proliferation of alternative currencies.

Néstor Kirchner came to power with little political legitimacy. He had lost in the first round against former president Carlos Menem, who, foreseeing a defeat in the second round, abandoned the race. The country was still in the middle of the great crisis. ‘They must all leave’ was the most popular slogan during 2001 and 2002, hinting at attitudes to foreign intervention.

Political parties were at their lowest levels of popularity since the return of democracy, without credible leaders or solid policies. Kirchner, like other presidents on the continent, decided to renew and revive politics. During both Néstor Kirchner and Cristina Kirchner’s administrations, the economy recovered. As in much of Latin America, the last ten years have been a period of extraordinary economic growth and prosperity for Argentina: during successive years, its GDP grew at a rate of nine percent, poverty fell from 57.5 to 20 percent and unemployment rates fell by 54 percent.

But the press did not recover.

During the presidential transition, before even taking office, Néstor Kirchner denounced the media publicly, stating that journalists were not independent: they had their own political and economic agendas. With this announcement, he drew a line between friends and foes. On one side he placed mainly the Clarín Group, with which he negotiated important agreements in private meetings, and on the other side he placed La Nación, a centenary, conservative daily Kirchner denounced for having supported the last military dictatorship.

But, in 2008, due to a series of political disagreements, the Kirchners split up with Clarín. By then, Cristina was the president. An open war commenced, in which key government officials, including the president and her husband, verbally attacked Clarín – ‘Clarín lies’, they said, calling it a ‘quasi-mafioso power’. The government, which for four years had given preferential treatment to Clarín, stopped talking to its journalists and executives. ‘Since 2008, the government has ordered its officials to cut off any contact with our journalists and to deny them access to public information’, Martín Etchevers, spokesman for Grupo Clarin, told me. The same had been done before to La Nación and this silence from those who traditionally provided official information sunk the paper. Clarín responded by becoming an anti-government newspaper.

The Kirchners also decided to damage Grupo Clarín’s economic interests in order to reduce its political influence and economic power. They withdrew their exclusive, multi-million dollar rights to broadcast football matches on television, initiated court cases to investigate their association with the last military dictatorship and managed to pass a media law that would force Grupo Clarín to get rid of most of its cable television licences, which represented more than 60 per cent of its income, as well as other assets.

Clarín refused to comply with the new media law and appealed to the courts, where a bloody battle continues to rage. Cristina Kirchner (Néstor died in 2010) seems determined to destroy Clarín, even if this is the last thing she does before leaving office in 2015. Clarín, its secret deals out in the open, has lost standing and political power.

The war has affected all media, which is now divided between those who oppose the government (Clarín, but also La Nación and Perfil, among others) and those who support it without question, small and medium newspapers and magazines and some important TV and radio stations controlled by opportunistic entrepreneurs who earn big profits from their association with those in power. Media outlets are either opponents or pro-government, with very little in between.

Today in Argentina, there is no state repression of freedom of speech, there is no censorship of the press. There is no need: the fact that journalists must align themselves on one side of the divide or the other speaks volumes about the country’s media environment.

This article appears in the current issue of Index on Censorship, Fallout: The economic crisis and free expression. Subscribe.

One response to “The press and the maiden”