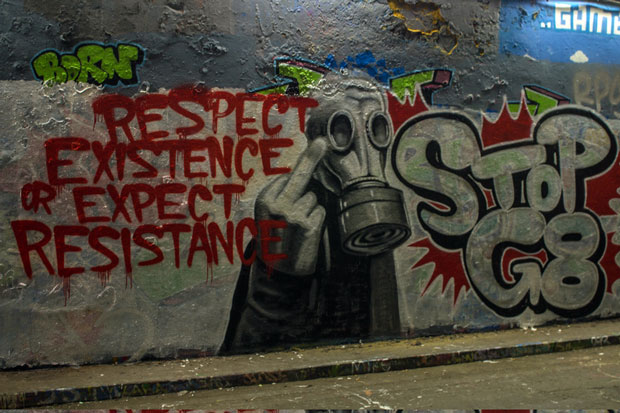 When G8 leaders meet in Northern Ireland today, they will focus on transparency, trade and development. But they cannot hope to achieve their declared goals on transparency, corruption and human rights without a clear commitment to respecting freedom of expression at home. Sean Gallagher writes

While the G8 nations generally perform well in indicators of media freedom, digital freedom and civil liberties more widely, there are some key weaknesses including constraints on the media, and digital surveillance. Russia is an outlier with a deteriorating record on free expression with the Russian government having increasingly pursued a course of restrictions on speech and free assembly.

While most of the G8 stand for digital freedom internationally, the Prism revelations drastically undermine the US stance in favour of an open internet on the international stage. Revelations that some of the G8 nations – generally seen as having the freest media, open digital spheres and a supportive artistic environment – have engaged in ongoing, intrusive and secret population-wide surveillance is deeply concerning. All of these nations are pledged to uphold the right of the individual to the freedom of expression through either native legislation or international agreements.

The G8’s emphasis on transparency at its Northern Ireland meeting is welcome – not least since one of the areas of considerable concern and varying performance across the G8 is corruption. Most of the G8 perform relatively well on corruption (though not as strongly as might be hoped for), Italy lags behind the US, Canada, Germany, UK, France and Japan to a striking degree, while Russia’s ranking is one of the worst internationally (as shown in table one).

In terms of media freedom Germany and Canada come first (according to Reporters without Borders 2012 index). The United Kingdom and the United States are behind these two but still ranked fairly highly while France, Japan and Italy lag behind these four a bit more. Russia is substantially lower indicating a weak and deteriorating environment for media freedom.

Germany’s media is largely free and the legal framework protects public interest journalism. Germans are ill-served by their country’s lack of plurality in broadcast media.

In Canada, Canadian Journalists for Free Expression and other observers have found that access to information has become more difficult since Conservative Stephen Harper became prime minister in 2006 – particularly when it comes to climate change. The country’s hate speech laws and lack of protection for confidential sources are issues our research highlights.

The United Kingdom’s move to reform libel laws is a clear positive for free press and expression, a change that our organisation helped deliver. Cross-party proposals to introduce statutory underpinning for media regulation via the Royal Charter on the Regulation of the Self-Regulation of the Press cross a red line by of introducing political involvement into media regulation. The shelving of the Communications Data Bill, or “Snooper’s Charter”, is also an encouraging sign, although a number of politicians are still calling for its reintroduction — especially after the Woolwich attack — which raises more questions.

In the United States, recent Prism revelations of the Obama administration’s continued surveillance both around the world and of the American people through secret subpoenas raise serious questions about the government’s activities. Alleged mistreatment of “tea party”-related organisations by the Internal Revenue Service also embroiled the Obama administration in questions about its commitment to transparency.

France’s media is generally free and offers a wide representation among political viewpoints but there is unwelcome government involvement in broadcasting and the country’s strict privacy laws encourage self-censorship.  Here, too, government surveillance has increased and politicians have used security services to spy on journalists.

While Japan’s press environment can be called free, self-censorship is rife and rules detailing “crimes against reputation” are enshrined in the constitution. Compounding these issues is the cozy relationship between government and journalists. The government’s poor transparency on the nuclear crisis at Fukushima has been singled out as a contributing factor to its decline in international rankings.

Italy’s media environment is robust in some ways but is hamstrung by political involvement in ownership and high media concentration in too few hands (not least by former PM Berlusconi). The country’s leaders are also adept at using the media in support of their own agendas.

Never a beacon for a free media, Russia has experienced an outright government takeover of the major broadcasting outlets and widespread violence and threats against journalists. When compared to the rest of the G8, Russia’s record is decidedly bad although censorship is not at the level of China (which does not though claim to be a democracy).

Citizen Surveillance on the Digital Frontier

The digital freedom index created by Freedom House is another useful indicator although it encapsulates many different dimensions into just one number. The US and Germany perform strongly in this index, with Italy and the UK somewhat behind. Russia’s ranking is very low. However, the Prism affair surely more than dents the US ranking – and shows how hard it is to combine surveillance and censorship (and other aspects of digital freedom) into one index.

The UN’s Special Rapporteur on Freedom of Expression Frank La Rue issued a timely report on government surveillance, privacy and freedom of expression ahead of the revelations of massive and appalling data mining carried on by the US government under the cloak of secrecy. This is a clear breach of transparency and digital freedom on a global scale.

While the US and European countries have been pushing back against the Russian and Chinese model of top-down internet governance, the widespread moves toward online surveillance undermines their efforts to ensure a multistakeholder approach to the web as part of the ITU process.

Though the US leads the world on Google requests for user data (a number that now seems just the tip of the iceberg in comparison to the Prism revelations), the G8 nations do not approach the levels that Brazil and India reach on demanding content be removed from the search engine.

The United States government has granted itself unprecedented powers to snoop on its citizens at home and abroad. First, the PATRIOT Act, parts of which were renewed in 2011, gave the US government unprecedented power to intrude into the online lives of its citizens in extra-judicial ways.  Later, in 2008, Congress approved the FISA Amendments Act, which envisioned the Prism and other programmes described in articles released by The Guardian and the Washington Post.  Despite this, several bills that would have given the government additional powers in the area of surveillance and copyright infringement have been withdrawn after concerted campaigns by internet and civil society activists.

The United Kingdom has stepped back recently from mass population surveillance with the shelving of the Communication Data Bill. But revelations of data-sharing activities with its US partner, as reported by The Guardian suggest we do not have the full picture. Beginning with the 2000 Regulation of Investigatory Powers Act and continuing with the recently shelved Communication Data Bill, successive governments have looked to surveillance of online activity in the name of national security. On a more positive note, interim guidelines on prosecutions of offensive speech on social media have been issued with the aim of hemming in criminal prosecutions, though restrictions on “grossly offensive” speech are still on the statute book. Takedown requests aimed at Google and Twitter are of a level comparable to France and Germany.

Japan is generally seen as having a positive record on digital freedom despite the government’s pressure to force telecom companies to remove “questionable” material from the web in regard to the Fukushima crisis.  The country also instituted a strict piracy law at the behest of the Recording Industry of Association of Japan.

While Italy has generally been slower to adopt new technology, Italians internet users are bound by rules on data retention that can be seen as a threat. The regulations allow the government to target criminals and protect national security, yet do not guarantee the privacy of the data it collects. Italy has strict copyright and piracy legislation. Most worrying is the conviction of Google executives for violation of privacy laws due to material posted to the search engine giant by a third party.

Germany’s approach to digital rights is regarded as open and courts have ruled that access to the internet is a basic human right. But in 2011, German authorities acquired the license for a type of spyware called FinSpy, produced by the British Gamma Group. Hate speech laws are beginning to have an impact on digital free speech.

In France, online surveillance has been extended as a result of a 2011 anti-terror law and Hadopi 2 (the law “promoting the distribution and protection of creative works on the Internet”) which is supposed to reduce illegal file downloading. Hadopi 2 makes it possible for content creators to pay private sector companies to conduct online surveillance and filtering, creating a precedent for the privatisation of censorship. Another 2011 law requires internet service providers to hand over passwords to authorities if requested.

In Canada, too, the right to free expression online is coming under increased pressure.  On a positive note, civil society activists were able to derail the Conservative government’s attempt to obtain online activity records without judicial oversight. Yet, the Canadian government recently introduced a law requiring librarians to register before posting on social media without first registering for either personal or professional use.

Though Russia’s online environment is relatively open, the government has been tightening restrictions leading to blocking of websites. The government claims this is to tackle crime and illegal pornography. However there are fears that it will apply the regulations too broadly and damage free expression in the digital realm through the creation of extra judicial block lists and censorship of content.

While most of the G8 have a wide ranging and often vibrant artistic sphere, there are many pressures that can lead of censorship or self-censorship whether from public order, obscenity or hate speech laws or from self-censorship including especially timidy by arts institutions. As Index on Censorship noted in its recent conference report on artistic expression in the UK, institutional filters are stifling creativity. The same can be said for the arts in the other G8 nations, though for different reasons. The specific reasons for brakes on creativity will be explored more fully in each of the country reports. But common themes emerge around hate speech, fear of offence and budget constraints that force arts organisations to shy away from controversial works. Arts funding continues to be used as a political weapon in some countries. In Russia, artists must avoid offending the sensibilities of government partners like the Russian Orthodox Church — as in the Pussy Riot prosecution.