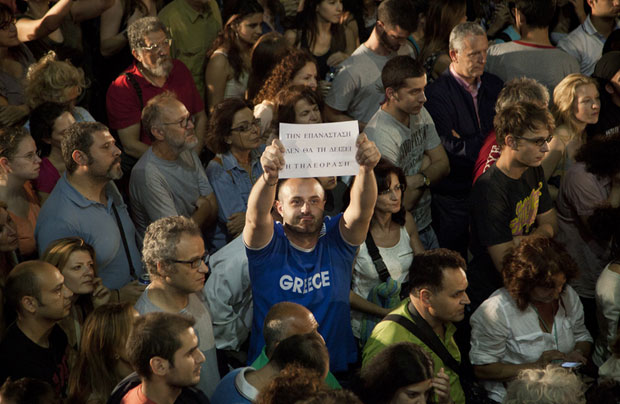 It happened so quickly, few people inside Greece, and fewer watching from outside could comprehend it. Antonis Samaras, prime minister and leader of the Greek coalition government, announced that the state TV channel ERT, the equivalent of the BBC, would be shut down from midnight on 11 June. Dawn Foster reports.

The caveats provided little relief — Samaras claimed ERT would reopen, with far slimmer staffing levels than the current 2,656 journalists it currently employs across the country.

The plug would be pulled at midnight, Samaras announced a few hours before. Citizen journalists reported seeing riot police marching to transmitters, and ERT offices in Athens, Thessaloniki and beyond were surrounded by riot police, stopped only by the huge crowds of protestors who quickly thronged the streets in fury at the shock decision.

Index on Censorship Chief Executive Kirsty Hughes commented today: “The sudden closure of Greek public broadcaster ERT by the government shows an attitude to media freedom that is extremely troubling. Throughout the Greek economic crisis the authorities have been eager to shoot the messengers, whether they be ERT employees or Kostas Vaxevanis, publisher of the ‘Lagarde list’. Narrowing the discussion through undermining free media will not solve Greece’s problems”

ERT journalists responded by occupying their buildings, and continuing to transmit wherever possible. After years of criticism for often acting as little more than an adjunct of government communications, ERT journalists became vociferous in their criticism of politicians, and government policy. The economist Yanis Varoufakis, admitted live on air that he had been banned from appearing on ERT by a PASOK spokesperson after stating that Greece needed to restructure its debt:

“…as you know, your government bosses had me blacklisted from this station ever since I refused to keep quiet about Greece’s bankruptcy. That act of totalitarianism was a prelude to the much grosser one that we are experiencing tonight. Clearly, I am not the person to say that ERT was a splendid organisation unblemished by censorship, political interference or corruption. But I think I am the person possessing the moral authority to stand here tonight in front of you and say that, despite all its ills, the totalitarian manner in which ERT was closed down was a crime against all civilised people the world over.”

The president of the European Broadcasting Union, Jean Paul Philipott, roundly condemned Antonis Samaras’s decision and urged the Greek government to reverse the shutdown with immiediate effect noting: “The existence of public service media and their independence from government lie at the heart of democratic societies, and therefore any far-reaching changes to the public media system should only be decided after an open and inclusive democratic debate in Parliament — and not through a simple agreement between two government ministers.”

Samaras and New Democracy have attempted to justify the censorship of state broadcasting by arguing that the shutdown was necessary to meet public sector redundancy targets set by the Troika, due to be re-examined at the end of July.

For many Greeks, the closure carries memories of the junta. The military dictatorship’s rule is still within living memory of many Greeks, and blank screens were often a precursos to another coup. Several ERT journalists, and opposition leader Alexis Tsipras of SYRIZA referred to the move as a “coup”, a particularly loaded term in Greece. Tsipras told protesters assembled outside an ERT station “This is completely illegal … The government has overstepped its authority. You can’t do this without parliamentary approval, it’s an issue of democracy.”

ERT journalists broke ranks in their anger at the sudden clampdown, speakig candidly on air, and outside ERT buildings of the pressure to bring government ministers on air and silence dissenting voices.

Samaras’s decision to shut down ERT with force, and without consultation with coalition partners PASOK and Democratic Left, has been widely described as inherently undemocratic. It remains to be seen whether the row will force a political crisis in the coalition, or if it heralds much wider, and more drastic sackings across the Greek public sector.

Dawn Foster works for the Guardian’s Comment is Free. She tweets at @DawnHFoster