Taking their cue from the neo-nazi Golden Dawn, Greece’s far-right newspapers have recently been targeting alternative opinions. While hardly breaking news, the language and symbolism of the campaign is of vital importance because it represents just the tip of the iceberg, Christos Syllas writes 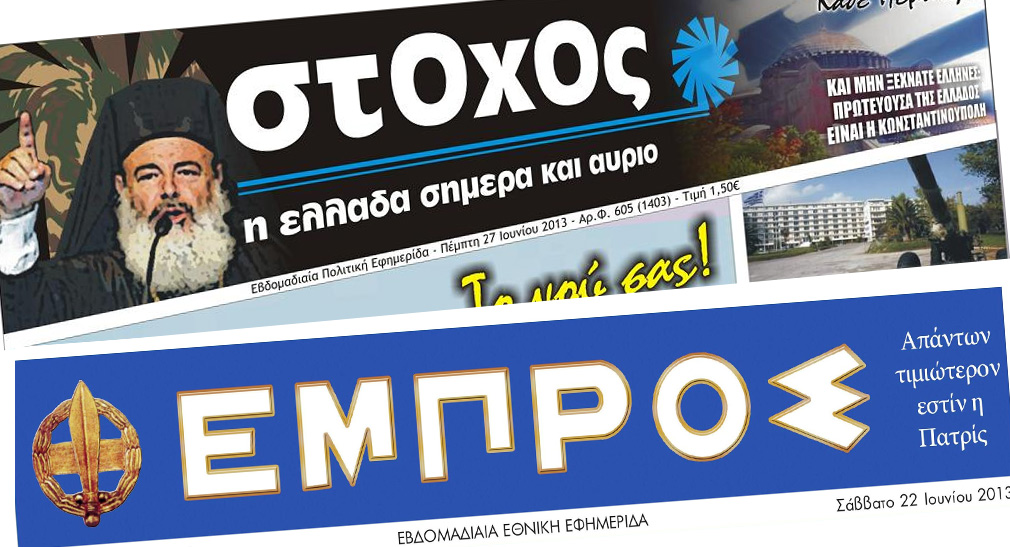 The rise of the Golden Dawn and its campaign against groups it perceives to be anti-Greek — leftists, immigrants, gays and lesbians — has encouraged nationalist and far-right sympathisers to spread their ideologies through existing and new media outlets both online and off.

On 6 June, for instance, the far-right publication Stohos, or Target, mocked Tasos Theodoropoulos for being “a self-proclaimed gay” who criticised a bishop’s persistent attempts to abolish a gay pride festival. Theodoropoulos had called the bishop a “flowery priest’s wife”. The turn of phrase apparently hit a conservative nerve.

Theodoropoulos, who was beaten shortly after the paper blasted him, wrote about his terrifying experience and suggested an explanation for the attack.

“They maybe didn’t know me. Even if they didn’t, newspapers like ‘Stohos’ have succeeded in helping them recognise me, as a target”.

Stohos is a far-right newspaper with a history of offensive and abusive language. It has always held anti-communist views, defended the Greek Orthodox church and launched campaigns against ‘anti-Greek’ sentiments. Its publisher, Savvas Hatziparaskeyas, was sentenced to 10 months in prison for repeatedly libelling the Migrants’ Forum  in Crete (MFC).

In that case, Stohos had accused two MFC members of “unpatriotic plotting intended to cause chaos and unrest” and appealed to Greek residents of Crete to break “this abcess”. MFC won its case against Hatziparaskeyas in September 2012.

In a telephone interview on 26 June, Dimitris Psarras, known for his prominent investigative journalism on Golden Dawn and on the far-right spectrum, shared some of his thoughts about the violence encouraged by far-right publishers:

“Stohos has been following for years the method of targeting people and journalists. I remember that back in the nineties, while reporting as a member of ‘Ios’ (an investigative journalistic team), we were denounced as ‘traitors’, ‘agents’ and ‘people who should leave Greece immediately’. At the time we were reporting on the protection of minorities and on human rights issues. Even though we largely documented our stories on decisions  from Greek or European courts, they wouldn’t stop. I recollect several open calls for violent deeds from nationalists and far-rightists. However, attacks and conflicts were disproportionate to the calls.”

Far-right publications have rejected voices considered to undermine “the purity of the Greek race and the glory of the nation.” And such publications also find “any distortion of religious beliefs” or support for the rights of immigrants to be unacceptable.

Indymedia Athens, for example, is a local collective of grassroots activists that heavily criticises Golden Dawn’s practises and nationalist ideas. For publishing calls for pro-immigrant rallies, and condemning racist attacks against immigrants, far-right voices have labelled the group as a “cesspit” and its members “snitches” and “employees of billionaire George Soros.”

The notion of being supported by ‘foreign’ funding is part of building a case that groups like Indymedia are part of an external threat. According to far-right rhetoric, anarchists and antifascists with the support of left-wing Syriza are anti-Greeks who must be fought. A far-right blog called Maiandrioi has previously made such a call to arms:

“We invite all Greeks in blood and soul, to be awake and military ready… in days to come, anti-Greeks will reveal their real face and they will jointly fight against Greeks.”

Golden Dawn recently published a newspaper called Embros. Next to the main story calling  for Golden Dawn victories in upcoming mayoral elections there was a photograph with children holding placards during a pro-immigrant rally. The caption underneath read: “foreign criminals thresh in Athens”. Insulting language for immigrants and children does not come as such a great surprise.

Artist Panayiotis Hatzistefanou wrote a piece entitled “Why I am anti-Greek” on 15 May, where he said that he can no longer stand to hear homophobic, racist, and far-right remarks in a country falling apart. Without hesitation Stohos attacked him for the piece, calling for his citizenship to be revoked.

It is worth noting that newspaper Stohos targeted Paris Karvounopoulos, an experienced military journalist. After publishing a piece critical of Frangos Frangoulis, a former chief of the Hellenic Army general staff and former minister for national defense, Karvounopoulos found himself reprimanded by “Stohos”. The title of that story was a call to Frangoulis: “General, if you must f*#k people up, start from him”.

Κarvounopoulos, however, claimed on 26 June that the former general had previously spoken against his self-proclaimed supporters.

At the same time, far-right targeting seems to have another dimension. Many argue about the building of a “lawsuit industry” by extreme right-wingers to those opposed to far-right viewpoints. Savvas Michail, general secretary of EEK, the Revolutionary Labor party, was sued by Golden Dawn because he labelled it as a nazi organization that attacks immigrants.

Katerina Thoidou, a journalist for the newspaper Workers’ Solidarity and anti-fascist activist (member of KEERFA, Movement Against Racism and Fascism Threat) was sued by Ioannis Andriopoulos, a lawyer who offers his services to a Golden Dawn MPs. Andriopoulos says that Thoidou insulted him by calling him “a fascist”.

Thoidou had used the label when Andriopoulos’ petition prompted the Greek Council of State to declare the country’s citizenship law (L. 3838/2010) unconstitutional. The law had been criticised for easing the process for citizenship, which moderate critics saw as an effort by political parties to gain the votes of newly-minted Greeks.

Thoidou, said in a telephone interview on 26 June, that recent targeting of journalists and people who oppose the Golden Dawn can be explained: “It is clearly an orchestrated effort to silence journalists reporting on Golden Dawn’s attacks on immigrants and homosexuals. The exposure of such incidents results in uncomfortable pressure not only against the ‘typical’ far-right advocates but against the government”.

2 responses to “Far-right publishing in Greece: Stories that ‘teach’ people a lesson”