“Art is a force of creation, opposing the current destruction of the country” says Terek Tuma, a Syrian artist featured in #withoutwords. The new London exhibition displays fine arts and visual installations from Syrian artists influenced by the conflict engulfing their country, and the Syrian people’s struggle for freedom. Melody Patry writes 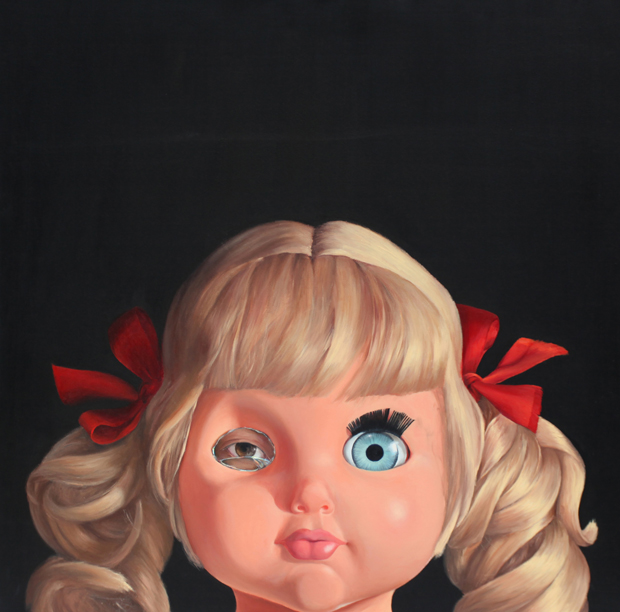 Whether via photographs or abstract paintings, #withoutwords provides a platform to artists who don’t have a free and safe space to display their art in Syria. Some of the work presented has been smuggled out of Syria, while other pieces were created in exile, by artists for whom it had become too dangerous to stay in the country.  In Syria, expressing controversial opinions or targeting political leaders can lead to lengthy prison sentences or worse. Ali Ferzat, popular satirical cartoonist and Index Award 2012 winner, fled Damascus after pro-regime forces viciously assaulted him and broke both his hands. Since his attack, Ferzat has resumed drawing and emerged as a potent critic of the regime.

Hamid Sulaiman, another artist in the exhibition, was arrested several times in 2011 before he was forced to leave the country. In one work, Speech Strike, a man whose mouth is taped over and locked stands in front of a background of crossed out words. The key to open the lock and liberate his speech is imprisoned inside his chest. For Sulaiman, this embodies the absence of protest against the death of innocents and children. 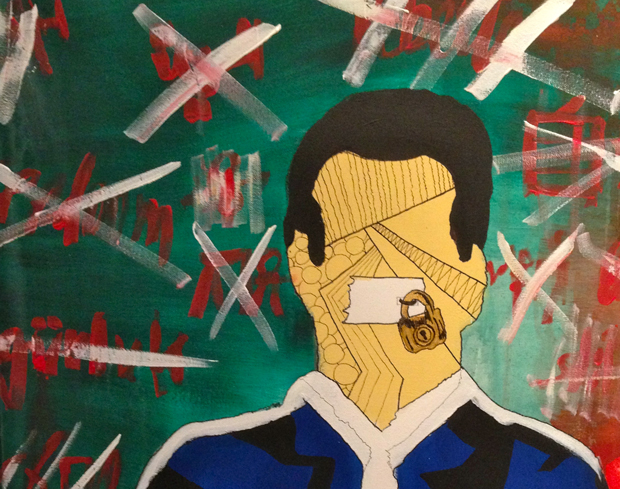 A detail of the work, Speech Strike, a man whose mouth is taped over and locked stands in front of a background of crossed out words.

For some artists, art is a way to address the situation in Syria and provide an alternative narrative to the conflict. Art provides an opportunity to give voice to those whom the violence has seemingly turned into faceless statistics or faded items on the World News page. Hazar Bakbachi-Henriot, a Syrian artist living in France, travelled to Antakya in Turkey and conducted a workshop with Syrian women from three refugee camps and the surrounding area. Bakbachi-Henriot told La Nouvelle Republique: “It was a way for them to participate in the revolution and for the world to know that they exist and they are not to be seen as helpless victims”

#withoutwords is a collaboration between P21 Gallery and Mosaic Syria, a London-based charity supporting Syrians affected by the conflict. Mosaic wanted to help develop an understanding of the significance of art in the promotion of peace and stability in a conflict and post-conflict Syria.

P21’s ambition is to offer alternative ways of storytelling and break stereotypical or biased views about the Middle East. P21 tries to promote dialogue between artists from the Arab world and the global artistic community.

Melody Patry is an advocacy officer at Index on Censorship. She tweets @melodypatry