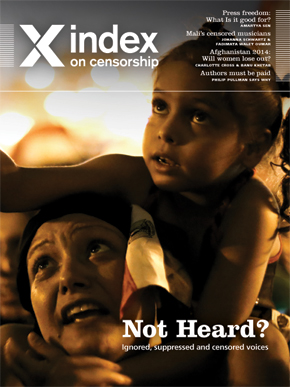 The autumn issue of Index on Censorship magazine brings together articles from writers including Amartya Sen, Philip Pullman, Jonathan Dimbleby and Peter Kellner, and covers India, China, Brazil, South Africa, Honduras, Colombia, Afghanistan and Mali. Under discussion are development and free speech; ignored voices; digital media; reporters under fire in South America. Get your copy of the current issue of Index on Censorship magazine, available now, by subscribing here or downloading the iPad app.

A report from China is one of many which looks at groups of people around the world who are ignored, censored or supressed by their governments, and whose voices are not heard or are ignored:

As millions of people move from the countryside to Chinese cities they end up as “invisible members of society”. The article by Jemimah Steinfeld and Hannah Leung looks at the use of hukou, a household registration document, to control society, but also to keep rural migrants as second class citizens, who have little access to state benefits and education as well as poorly paid jobs. Most are afraid to criticise the system because of their status.

Hukou are registered to the place where they are born, restricting those rights if anyone choosing to move around the country. Shanghai, for instance, now has 10 million residents who have moved from the country, and cannot access the same services as official residents.

Also in the issue:

Reports on violent attacks against journalists in Honduras and Colombia