NEWS
Is this America's own Pussy Riot trial?

On a Saturday afternoon in June, a group of activists walked into a bank in Manhattan, New York, and staged a peaceful protest performance. The Church of Stop Shopping, led by Reverend Billy, were protesting at JP Chase Morgan and other banks’ investment in fossil fuel projects, which they say is unethical in the face of climate change.

Bill Talen, 63, the man behind Reverend Bill and the Church of Stop Shopping, has been staging this kind of action for a while. I interviewed him for New Humanist magazine in 2004, after a protest at a Starbuck’s in Camden, North London.

But now Bill and his colleague Nehemiah Luckett are facing charges of riot in the second degree and menacing in the third degree, for their JP Chase Morgan protest. The pair could end with one year in jail. For a peaceful protest. They are due to appear in court on 9 December.

It’s hard not to think of the fate of Russia’s Pussy Riot when writing about Reverend Billy. Both Pussy Riot and the Stop Shopping Choir have used similar tactics, staging peaceful performance protests right in what they would see as the belly of the beast. And both have been subjected to very harsh charges. Earlier this year, members of Pussy Riot told me they “had not planned for the extreme reaction from the authorities,” after they staged their “Punk Prayer” in Moscow’s Christ The Saviour Cathedral. Similarly, Reverend Billy, while accepting that arrest is an occupational hazard for a protester, has been surprised by the riot charge and the potential sentence. The difference is, of course, that we don’t expect this kind of thing to happen in the US.

This week I asked Billy about the protest, and his upcoming court case. 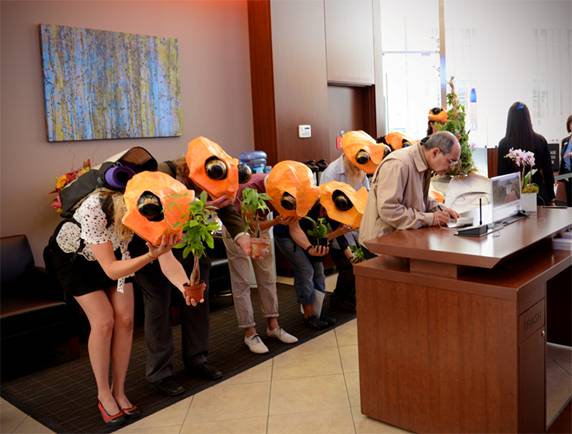 Index on Censorship: Can you tell us what happened at JP Morgan Chase?
Reverend Billy: We interrupted the very wealthy of upper Manhattan in their “wealth management” sessions.   The sea of white people at walnut desks looked up to confront large flaming frogs leaping on their desks, handing out information about the impact of their fossil fuel investments.  An Elvis impersonator narrated the event while the “Golden Toads” – an animal forced into extinction 30 years ago by climate change – harmonised and hopped.  Under the toad costumes was the singing group called “The Stop Shopping Choir”. 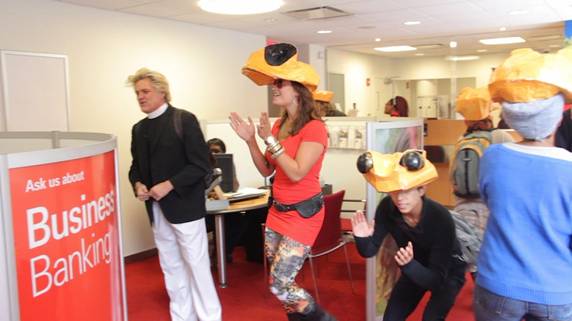 IoC:What were you protesting about?
RB: Banks and big hedge funds are busy investing in fossil fuel projects around the world, making high profits, at precisely the point that the natural scientists – as in the 5th IPCC report from the United Nations – are telling us that all we can do to save ourselves and the planet as we recognize it today is to immediately stop gas, oil and coal.

IoC: Were you surprised to be arrested? Or is it just something you see as a risk of the job?
RB:Although I’ve been arrested many times, like most activists – you’re always surprised.

IoC: You’re potentially facing a year in jail. Have you ever had charges this harsh before?
RB:No – the most time I’ve served was three days in the Los Angeles County Jail.  Usually I have the overnight stay.

IoC: Why do you think this has happened now, after years of activism? Just a quirk of the prosecutor? Something else?
RB: Stopping the business of the very rich is altogether different kettle of fish from our usual “nonviolent dramatic action” – which is often in parks, lobbies, between cars in traffic jams, on the Staten Island Ferry, etc. 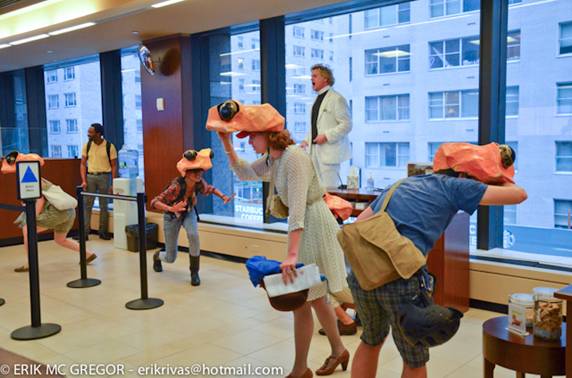 IoC: How do you intend to fight the charge?
RB: The “Necessity Defense” – which means that if someone is drawing a gun on us to kill us, we have the right to grab them and disarms them. I have the right to commit a minor crime to prevent a great crime that no other presiding authority can prevent.  No presiding authority is dealing with climate change.  Governments in the West and China – are committed to their deadly gradualism, controlled by fossil cartels.

IoC: How do you think this charge squares with your first amendment rights?
RB: The First Amendment has been under systematic attack in New York City for 20 years, under the leadership of Rudolf Giuliani and Mike Bloomberg, their police and courts. The right to express in public space is besieged by permits and police, and overwhelmed by corporate expression – advertising in myriad forms, from the glowing gadget in the hand to the 80 foot tall Kate Moss looking at me like we just made love.  We must reclaim freedom of expression, and we believe that this resurrection of extinct Golden Toads is the right drama.  Earthalujah!