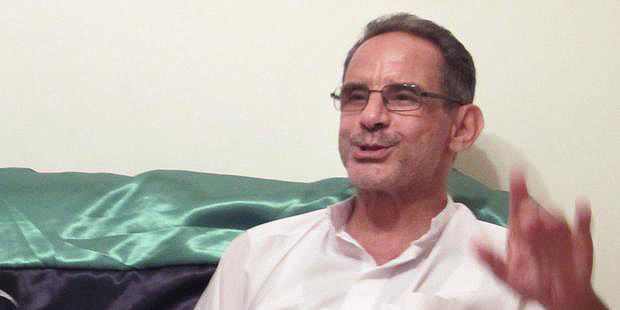 Jamal al-Hajji was convicted of defamation on 31 December 2013. (© Amnesty International)

After 42 years of political oppression in Libya, it was hoped that the apparatus of Gaddafi’s regime would be dismantled after he was swept from power. Vestiges of the despot’s suffocating grip on free speech still remain, and are still being used to suppress political expression.

Jamal al-Hajji, a writer and commentator from Tripoli, faces jail and a large fine after comments he made in a television interview in February 2013 sparked a defamation case by government figures. During an interview on al-Wataniya, a Libyan television channel, al-Hajji accused the Minister of Foreign Affairs, Mohamed Abulaziz and five other politicians and public figures of conspiring against Libya and the “17 February Revolution”.

Four of them lodged a complaint against al-Hajji, resulting in a court sentencing him to eight months in prison and a 400,000 Libyan dinar fine (around £200,000). His case is being supported by Amnesty International, who say relics from Gaddafi’s punitive legal system are being used to obstruct free speech.

“No one should be sent to prison for expressing their views. Free expression is one of the rights Libyans took to the streets to reclaim during the 2011 uprising against Muammar al-Gaddafi,” said Hassiba Hadj Sahraoui, Deputy Director of the Middle East and North Africa Programme at Amnesty International, in a statement issued on Amnesty’s website.

The charity’s Libya researcher, Magdalena Mughrabi, told Index on Censorship: “The Penal Code which is currently in use is the same as under al-Gaddafi.  The Libyan authorities  should immediately amend or repeal all laws and articles of the Penal Code which impose arbitrary restrictions on freedom of expression.”

Al-Hajji, now aged 58, was arrested a number of times by the Gaddafi regime — the first time in 2007 for organizing  a peaceful gathering to commemorate the deaths of 12 protesters at a 2005 demonstration in Tripoli.

He spent a year in jail without charge, and was then sentenced, by the State Security Court, to twelve years imprisonment. Luckily, he was released a year later and submitted a formal complaint to the authorities, criticising the justice system, maltreatment of prisoners, and the torture and arbitrary detention of Libyan citizens.

The authorities summoned him for questioning over the document and threw him in prison for a further four months.

In 2011, he was arrested once more by police officers, who accused him of hitting a man in his car. At the time he was advocating online for peaceful protests mirroring those which had been happening in Tunisia, Egypt and other states across the Middle East.

And now, even with a new transitional regime in place, al-Hajji has found himself in prison again.

When asked if he thought the revolution had been successful, al-Hajji told Index on Censorship: “It is still going on and will continue, it will not stop until we have freedom. The military are not ready to lead this country so we will fight to remove them until we get a proper, working democracy.”

“I wouldn’t call this a new regime, these people aren’t responsible enough to run a country and in any case, many are from the old Gaddafi regime. They don’t want the laws changed because they know any new laws could be used against them.”

The law used to convict al-Hajj was Article 439 of the Libyan Penal Code, which carries a punishment of up to two years in prison as well as a fine. Several other articles of this Code prescribe prison terms for activities that would commonly be understood as freedom of expression and freedom of association. In cases where someone criticises public officials or state institutions, the recommended punishment can be the death penalty.

The same laws were used in September 2013 to charge Moad al-Hnesh, a Libyan engineer aged 34, who had campaigned against Western intervention into Libya in 2011. While living in the UK, he participated in a Stop the War Coalition demonstration outside the House of Commons in London, during which he was photographed holding a photo of a purported victim of a NATO bombing.

Following his return to Libya, he was arrested on 3rd April 2012 by a militia from Zawiya, after a group of Libyan students who had met him at Coventry University lodged a complaint against him with the Zawiya Military Council. He now faces a life sentence for criticising Libya while abroad, or a reduced sentence of fifteen years for “publically insulting the Libyan people.”

Amara Abdalla al-Khattabi, a journalist aged 67, was arrested in December 2012, a month after his newspaper had published the names of 84 allegedly corrupt judges. He was charged with “insulting constitutional or popular authorities” and also faces up to 15 years in prison. Article 195 of the Penal code was frequently used in the al-Gaddafi era to repress freedom of expression.

Al-Hajji is currently on bail and has an appeal hearing scheduled for 13th February.

This article was posted on 27 January 2014 at indexoncensorship.org