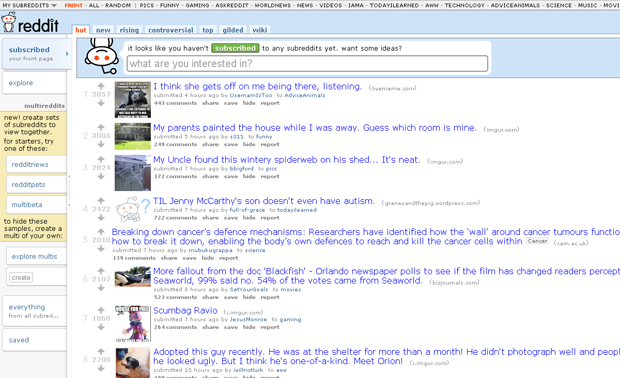 San Fransisco based Reddit.com made headlines when it allegedly banned climate change deniers from posting on the site.

UK-based freedom of speech advocate Brendan O’Neill, editor of Spiked magazine, claimed it had “shredded its own reputation” in a piece for The Telegraph, while James Delingpole, a right-wing commentator for The Spectator delivered a hot-blooded attack on the policy via Fox News website – “The greenies — and their many useful idiots in the liberal media — are terrified of open debate on climate-change because the real world evidence long ago parted company with their scientifically threadbare theory.”

Reddit is a huge online links directory and lively discussion board, with a reputation for scale, wit, lack of censorship and a strong sense of community. Over eighty million monthly unique visitors, two hundred and sixty million comments to date and a presence in one hundred and eighty countries are some of the stats that led Conde Nast to buy the company a year after it was launched in 2005. Last year, analysts valued it at over $200 million dollars. It’s no Facebook or Twitter in terms of publicity attracted, but it gets more traffic than CNN, and the Guardian.com’s monthly readership could fit into Reddit’s three times over.

It’s the famed lack of censorship that has lead opinion writers on both side of the Atlantic to point out this new policy on climate change denial.

For those who haven’t visited, the site is divided up into sub-reddits–links and discussions, which are classified according to themes, and run by unpaid volunteers.

In fact, rather than reddit.com having banned climate change skeptics, it’s the moderators of the “/r/science” reddit who have instigated the ban. Run by volunteers, it collects links about new research and scientific articles.

“/r/science is not the beginning or the end of internet discussion”, defends Carl Ellstrom from Sweden – a reddit user, scientist and moderator of the science subreddit. “Users who are banned from /r/science are not banned from reddit, and can discuss their opinions in other subreddits.”

While it’s not the beginning or the end, /r/science still attracts millions of visitors each month. So the decision to ban climate change scepticism is of note.

Typical of their profession–other moderators backed up the decision by citing research–97% of climate scientists agree that man is changing the planet, according to a report from the respected Institute of Physics.

The move principally revolved around aggressive and repeated comments, which a small group of malicious users were posting on every article or piece of research concerned with climate change. Their allegations generally focused on conspiracy theories, didn’t address the article with constructive, focused criticism, were repetitive and, critically, had a disproportionate silencing effect on any discussion.

“These problematic users were not the common ‘internet trolls’ looking to have a little fun upsetting people,” explains Nathan Allen, a PhD chemist with a major chemical company and reddit moderator who wrote for The Guardian.

“These people were true believers, blind to the fact that their arguments were hopelessly flawed, the result of cherry-picked data and conspiratorial thinking. They had no idea that the smart-sounding talking points from their preferred climate blog were, even to a casual climate science observer, plainly wrong. They were completely enamoured by the emotionally charged and rhetoric-based arguments of pundits on talk radio and Fox News.”

Expanding on that last point Allen says the same comparison could be made with the climate change denial lobby in general, and their disproportionate influence on the press.

“Like our commenters, professional climate change deniers have an outsized influence in the media and the public. And like our commenters, their rejection of climate science is not based on an accurate understanding of the science but on political preferences and personality.”

“If a half-dozen volunteers can keep a page with more than 4 million users from being a microphone for the antiscientific, is it too much to ask for newspapers to police their own editorial pages as proficiently?”

If Allen’s suggestion was ever to be noticed and accepted by editors–he ramifications for freedom of speech and media censorship would be radical. Editors might be forced to ignore lobbying from certain spheres of belief, or might miss out on important stories.

But UK research published earlier in the year, shows the disproportionate effect on distorting the truth that having a free and open press creates.

On average, Brits think teenage pregnancies are twenty five times higher than official estimates. The public think 31% of the population are immigrants–the reality is closer to ten percent. Welfare benefit fraud is thought to be 34 times higher than it actually is.

All of the misconceptions covered by IPSOS Mori, the polling company that undertook the research, have been central to political party manifestos and been aggressively pushed by their PR companies.

Or that journalists are too readily being made tools of political parties who want to get elected, who want the issues that they care most about continually in the press, hotly discussed and “on the agenda.” Perhaps we, as journalists, need to remain ever vigilant to the briefing of misinformation and our responsibility to the truth.

This article was published on 3 Jan 2014 at indexoncensorship.org