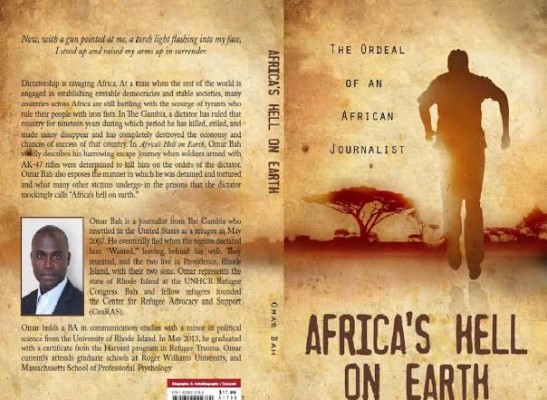 Driven into exile by the brutal regime of Gambia’s president, Yahya Jammeh, journalist Omar Bah’s dramatic flight from his homeland is recounted in his memoir Africa’s Hell on Earth: The Ordeal of an African Journalist.

An outspoken critic of the country’s autocratic ruler, Bah was forced to flee Gambia for neighbouring Senegal, where he was welcomed by other Gambian exiles who had settled in Dakar. Later, his path led him to Ghana and eventual resettlement in the US.

“I wanted to use my new found freedom in America to speak up because I regained the voice I lost. The book is my source of rejuvenation, my symbol of refusal to be silenced, and the avenue to continue to expose corruption, mismanagement, torture, repression, killings and the general dictatorship in The Gambia. I feel I owe it to the suffering people in The Gambia”, he stated.

Bah fell from grace after he was suspected of the being an informant for US-based Freedom, an online news site critical of the Jammeh regime, while working for the pro-government Daily Observer newspaper.

As a US resident, Bah says he feels challenged to speak about the injustices and give a voice to the voiceless since he now has the ability to speak up against the dictatorship in the Gambia without fear of reprisal.

“The name of this book, Africa’s Hell on Earth, refers to the nickname of the infamous Gambian prisons where so many people have disappeared. The prisons are overcrowded, and there are lots of diseases, torture, executions and suffering. Worse still, majority of the detainees are there simply because they oppose the regime. The Gambian dictator, Yahya Jammeh, has ruled for nineteen years. During this period, he has killed, tortured and exiled many Gambians.”

He said the Gambia is a country where is so much poverty while the powers that be live in luxury without regard to the poor and sick population. The writer bemoaned the situation of the Gambian people, who are subjected to summary executions if they dare oppose the regime.

In a review of Bah’s book Demba Ali Jawo, a former president of the Gambia Press Union, described it as an accurate depiction of the obstacles Gambian journalists have faced since the Jammeh regime came to power. Jawo called the book an invaluable reference for those interested in documenting the atrocities being committed against innocent Gambians by their own government.

According to Jawo, Bah narrowly escaped a dragnet that had been thrown around the Gambian capital, Banjul, to arrest him. A soldier let Bah pass through a checkpoint.

“By letting Omar go, the soldier not only risked his own job and life, but he also had to forego promotion and even compensation if he had handed him over to the authorities”, Jawo observed.

Bah now lives in Rode Island with his wife and two sons is attending graduate school through scholarship. He is the founder of the Center for Refugee Advocacy and Support and represents the state of Rode Island and the Northeast region at the Washington-based UNHCR Refugee Congress.

“When I look back at my journey, I feel my struggle was worth it. Despite the danger I had put myself in, and all that I went through, the nation of the United States of America, out of all the countries in the world, gave me the opportunity to begin a second life. Today, I feel my new life in America, though just starting, has been dearly meaningful. I am thankful to this country.”

He advised fellow refugees and immigrants make use of the opportunities that they have in the US and remember that there are millions who remain in the camps with no hope of rebuilding their lives.

This article was published on March 3, 2014 at indexoncensorship.org