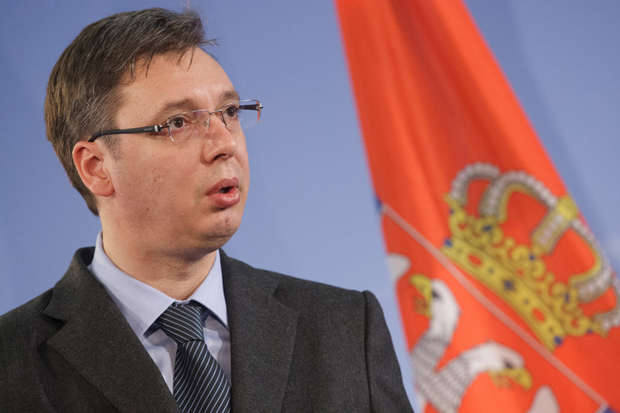 Serbia is in the process of forming a new government. Following the Progressive Party ‘s (SNS) landslide victory in Sunday’s elections — securing 48% of the votes and 156 of 250 parliamentary seats — one man in particular holds the keys to the country’s future. Leader Aleksandar Vucic, Deputy Prime Minister in the previous coalition, is dropping the prefix and taking the top spot this time around.

While at 44, he would be a relatively young leader, he has had plenty of experience in high politics. Indeed, back in the 90s, he served as Minister of Information under Slobodan Milosevic. Many people spend their twenties trying figure out what to do with their lives. Vucic, meanwhile, was busy introducing a notoriously hardhanded media law, among other things, introducing fines to punish journalists and banning foreign media. As he now prepares to take office, should Serbia’s press be worried?

On the one hand, Vucic has worked hard to shift his image from hardline nationalist, to pro-EU reformer, his focus firmly fixed on Serbia’s struggling economy. He has gone after some of the country’s biggest financial criminals in a high-profile anti-corruption campaign. He has pushed for normalisation in the strained relationship with Kosovo, to put EU accession on track. On election night, the Foreign Minister of the United Arab Emirates, Sheikh Abdullah bin Zayed al Nahyan, could be found celebrating with Vucic at the SNS headquarters. The man who once said that 100 Muslims should be killed for every Serb, is securing loans in the billions from the UAE to help fund ambitious regeneration projects in Belgrade.

Yet, despite this apparent commitment to transparency, and despite claiming freedom of the media as one of his “five priorities” — his own personal regeneration, if you will — big words have not really translated into action when it comes to Serbian press freedom.

The country’s journalists have long been working under less than ideal conditions. From the direct, physical threats suffered under the Milosevic regime, to repressive legislation, free expression has been well and truly chilled. But the biggest challenge today is soft censorship, according to the Balkan Investigative Reporting Network (BIRN).

“Press freedom in Serbia is mostly endangered by soft censorship meaning that it is mostly endangered by discriminatory and un-transparent allocation of state funding towards media outlets. This money is usually used to reward those who are in favor of the government and to punish those who oppose it. As opposed to direct threats, soft censorship is much harder to detect,” BIRN’s Tanja Maksic told Index.

“In [the] last year and a half of the Vucic and [former Prime Minister] Dacic government, we haven’t witnessed much of the determination to stop this undemocratic practice,” she adds.

Indeed, evidence points to the Prime Minister to-be doing the exact opposite. A recent report analysing election content on TV showed that the Progressive Party, and Vucic specifically, were favoured in the, overall strikingly positive, coverage. And back in February, a video adding satirical subtitles to genuine footage showing Vucic rescuing a boy from a snowstorm, was taken down. The video, originally from public broadcaster RTS, was removed over copyright infringement claims, despite campaigners arguing it did not break copyright laws. Authorities are widely believed to have played a part in the removal. A number of websites that had published it were blocked or attacked from within the country, while individuals behind the sites saw their social media profiles hacked. The claims made in the subtitles — that the whole report was staged to paint Vucic in a favourable light ahead of the elections — might have cut too close to the bone.

Vucic’s alleged control over sections of the Serbian media is perhaps most evident in the case of former Economy Minister Sasa Radulovic. Following his resignation, not long before the eventual collapse of the previous government, he was, without explanation, dumped from a popular TV talk show. The last-minute replacement? Aleksandar Vucic. Radulovic soon tweeted that he couldn’t wait to tune in to the evening’s show “to figure out why I resigned”. He followed this up by publishing an explosive resignation letter, accusing the government, including the anti-corruption crusading deputy prime minister himself, of corruption. He added that he’d been subjected to a “media lynching” by tabloids friendly to the government, that self-censorship is rife in Serbian media and that “news is being smothered”. The letter was covered by state-funded news agency Tanjug, but the report was removed within minutes and only republished following complaints.

Lily Lynch is the co-founder and editor of Balkanist, an independent online magazine covering, as the name suggests, the Balkan region. They have first-hand experience of Serbia’s restrictive media environment, once having their power cut for three days after publishing government leaks. She says Vucic has been “disastrous” for Serbian media, and believes that with his newfound, unchecked power they will see “more censorship”.

“I think that self-censorship will likely get even worse than it already is, as compliance with the status quo is often the only way to keep a job in Serbia,” she explains to Index. “Independent media outlets like Pescanik will be allowed to work because their audience is small and marginal, and their existence actually benefits Vucic because he can cite them as evidence that there is media freedom in Serbia. Meanwhile, the media that the majority of the country reads or watches will continue to depict Vucic as the savior of the nation.”

This depiction seems to have made an impact beyond Serbia’s borders too. Vucic’s pro-EU stance, and especially his perceived pragmatism regarding Kosovo, has boosted his international profile. He’s been labelled “the man bringing Belgrade in from the cold”, and American ambassador Michael Kirby has even praised Serbia’s media freedom.

It is, however, also worth noting certain cracks in this image within Serbia. The turnout figures of 53.2% — following the downward trend of previous elections — would suggest the adulation among the population is not as widespread as on first glance. The Facebook group “I did not vote for Vucic”, set up on election day, with its some 2,400 likes and counting, might point to the same.

Tanja Maksic says the real test for the Vucic government will come with adoption of much needed laws prescribing stricter control of media funding from public budget. If these are passed and implemented it “will be a clear demonstration of a new political will to pass the reforms in media sector,” she adds.

Lynch is not optimistic. She says there is a real danger Serbia could go the way of Hungary, a country that under the leadership of Victor Orban has witnessed the state of media freedom nosedive. She is not the only one to make the link. A recent Radio Free Europe/Radio Liberty asks if Serbia “is headed for Orbanization”?

“Vucic has used the media as mouthpieces to denounce opponents, smearing them and accusing them of crimes without evidence. I definitely think this will continue. Others say “everything is up to Vucic now, he has no one to excuses anymore” but he has attained this level of power and will not let it go so easily. Anything that goes wrong will be the fault of some minister or other, who will be sacked and humiliated in the press so that Vucic is not viewed as responsible in the eyes of the public,” Lynch says.

“Vucic’s arrests and “anti-crime crusade” has made many public persons, including journalists, very afraid.”

This article was posted on 21 March 2014 at indexoncensorship.org