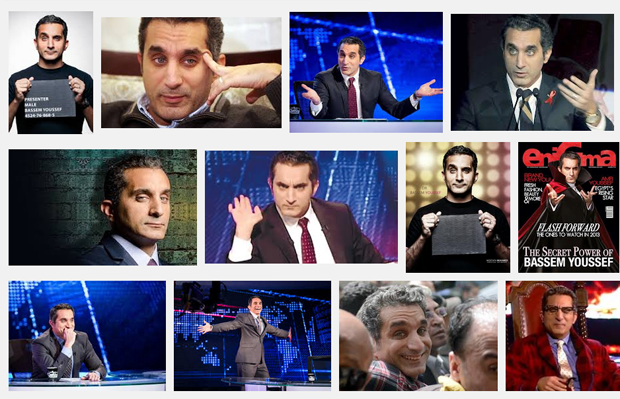 Dr Bassem Youssef, the former heart surgeon and  Egyptian TV presenter likened to Jon Stewart, has declared he is taking extended time off from journalism, after an anti-semitism and plagiarism row swept through Egypt.

Dr Youssef was named by Time Magazine as one of the “100 most influential people in the world.” He has over two and a half million followers on his Twitter account and his weekly TV show, Al Bernameg, attracts millions. A political satirist and comedian, he is heavily influenced by Stewart’s Daily Show in the US.

Youssef’s self-censorship comes after a very public humiliation. The Cairo Post reports that an article written for publication in last Tuesday’s edition of Al Shoroqu, concerning events in Ukraine was heavily plagiarised a similar article Ben Judah wrote for Politico about the same topic.

The article was entitled “Why Russia No Longer Fears the West,” and while Ben Judah is a recognised global expert on Russia, Eastern Europe and Central Asia, Youssef is a pop-politics TV presenter with clearly scant knowledge of tensions with Putin.

Youssef tweeted that he had cited Ben Judah’s work at the end of his piece, but that editors had not include this in the final version.

Judah was then targeted by hundreds of anti-semitic messages, including pictures of Nazi symbols.

“Isreal [sic] under my shoes holocaust b***h lol hitler b***h hahahaha if I were hitler I will burn u all,” said one Cairo-based user.

Another from Cairo – “Jews curse of God on Earth.”

Another from Mansoura wrote “I will f**k your family one by one.”

“I made a public statement to lessen the damage on him as I respect his work for freedom of the press” Judah told Index. “Everyone can make mistakes under journalistic stress.” He received no apology from Dr. Youssef, even after the anti-Semitic tweets started arriving.

“Regarding the Twitter rage : I am from a family of Holocaust survivors, so it did not surprise me such hatred of Jews exists.”

Judah believes that the majority of the abusers were “middle class English-speakers in Cairo.”

“The whole experience reveals the scale of racial hate in the Arab world towards Jews,” he added.

In 1945 there were eight hundred thousand Jews living across the Arab world. Today, there are fewer than eight thousand.

Like Christians in the Middle East, who have seen their numbers drop from 15% to 5% in the last hundred years, the last fifty years saw many Jews move to Europe, the US, or Israel. The beginning of the exodus correlates roughly with the establishment of the state of Israel in 1948, suggesting that Arabs persecutions of Jews has also been politically motivated.

Judah says he received hundreds of anti-Semitic messages, many of them referencing the state of Israel.

Judah also observed that many of those tweeting abuse had been key players in the Arab Spring.

“Egyptians who were baying for my Zionist blood were not peasants but mostly middle-class English speakers. Many of them were women, the heroes of the Arab spring.”

The anti-Semitism was not uniform, according to Judah “a lot of big Egyptian bloggers did touchingly tweet their shame and apologies to make me feel a bit better”.

This article was published on April 1, 2014 at indexoncensorship.org