I was retweeted by Caitlin Moran on Wednesday evening (#humblebrag). It was a curious glimpse into the world of internet fame. Suddenly my replies were full of retweets and favourites – hundreds of them.

The tweet itself was fairly innocuous; in fact, it was a bit of a cheat. I’d copied someone else’s tweet, adding my own disbelief. And that tweet by someone else was a retweet of a three-year old tweet by well-hard actor Danny Dyer, who had been tricked, quite amusingly, by someone asking for a shout out to his grandad who had helped beat the Nazis, accompanied by a picture of a young Stalin. I’d missed it at the time. 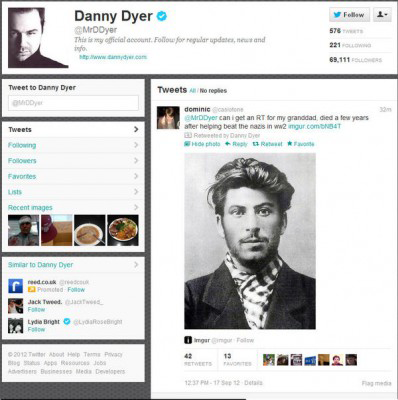 Anyway, on it came throughout the evening, retweets, favourites, questions, statements of the obvious, snark…. It was weird, and unexpected, and kind of exciting. It was like I’d done something really good, rather than just stealing someone else’s old joke. And I was able to track exactly how good it was. I had pulled some kind of killer move and was getting my reward. I was winning the game.

In his 2013 documentary on video games that changed the world, Charlie Brooker, who knows so much about these things, caused a small stir when he suggested that Twitter was in essence, an online multiplayer game. Considering how high-mindedly people like me talk about social media as platforms for change, tools of democratisation and so on, it’s a provocative view to take. But Brooker is right. Twitter users are engaged in a massive game, possibly without end. We measure the success of individual moves (tweets) with retweets and favourites: keep pulling off these successful moves, and we can see our scores go up, in terms of followers accumulated. Not counting the uber famous, who will get a million retweets for the most grudgingly given “I HEART MY FANS; here’s the merchandise page” tweet, most of us are in this game to some extent.

Periodically (well, every time Grand Theft Auto comes out), Keith Vaz or Susan Greenfield or someone will get terribly upset about the ruination caused to young minds or young morals by all this mindless violence. This game lets you steal cars! Run down old ladies! All sorts of unspeakable things! But GTA and other games let you do nothing of the sort: at best, they let you pretend you’re doing these things. In fact, it’s not even that: it lets you control a character, whose character is already somewhat predetermined, in doing some of these things. You’re essentially engaged in a technologically advanced form of improv theatre. Except far more entertaining.

And this is where the Twitter-as-game thing falters: if I threaten to blow up a plane while playing a normal video game, nothing will happen to me. If I do it on Twitter, well…

Last Sunday a 14-year-old Dutch girl called Sarah got in trouble for tweeting that she was a member of Al Qaeda and was about to do “something big” to an American Airlines flight.

According to Dutch news agency BNO, the exchange went as follows:

“Hello my name’s Ibrahim and I’m from Afghanistan. I’m part of Al Qaida and on June 1st I’m gonna do something really big bye,” the girl, identifying herself only as Sarah, said in Sunday’s tweet. Soon after, American Airlines responded in their own tweet: “Sarah, we take these threats very seriously. Your IP address and details will be forwarded to security and the FBI.”

“omfg I was kidding. … I’m so sorry I’m scared now … I was joking and it was my friend not me, take her IP address not mine. … I was kidding pls don’t I’m just a girl pls … and I’m not from Afghanistan,” the girl said in subsequent tweets, later adding: “I’m just a fangirl pls I don’t have evil thoughts and plus I’m a white girl.”

It’s a stupid thing to do, obviously. But Sarah was playing by the rules of the game. She was being provocative, and, in her mind at least, funny. These are things that get you RTs and followers.

But sadly for Sarah, and the rest of us, there comes a point where social media stops being a game and starts being serious business.

We’ve seen this in the UK, of course, with Paul Chambers and the infamous Twitter Joke Trial.

That entire case was a travesty, because no one at any point believed Chambers even meant to behave threateningly. It’s unlikely anyone really believes Sarah meant anything by her tweet either, but in the order of things so far established, directing a comment at an account (at-ing someone, for want of a better phrase), as the Dutch girl did, is worse than simply referring to them, as Chambers did in his tweet about blowing Doncaster’s Robin Hood airport “sky high”.

Where is all this going to end up? I really don’t know. But I can only reiterate the point made many times before that, intriguingly, with the increasing ease of free speech, we’re seeing the rise of an increasing urge to censor; not just in authorities, but in everyday people.

It’s an urge we have to resist.

This article was originally published on 17 April 2014 at indexoncensorship.org

2 responses to “Twitter as a game has real-life consequences”