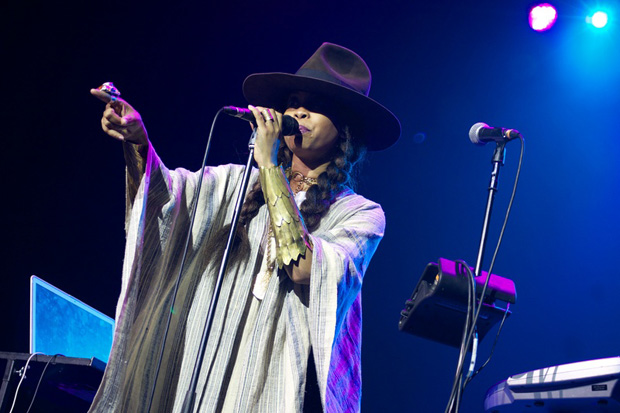 R&B singer Erykah Badu has called off her planned performance for Gambian dictator Yahya Jammeh at the 11th edition of the International Roots Festival. This comes after an intense online campaign by Gambian and foreign right groups against her decision to perform for African dictators.

According to Gambia’s pro-government Daily Observer newspaper, the national organising committee of Roots Festival in a press release said two Jamaican acts, Scratchylus and Empress Reggae, will replace Badu, adding that she could not make it due to “unforeseen circumstances”.

What’s On Gambia confirmed that Badu’s manager Paul J. Levanto disclosed to them in a short email that the artist is no longer performing in Gambia. The site also reported that Gambian rapper Gibou Bala Gaye alias Gee, wrote on his Facebook page that political activists are wasting their time trying to convince international artists to cancel their plans to perform at Gambia’s Independence Stadium.

“Going through my tweets and this BS about Erykah Badu not to come to Gambia is pissing me off. Only people saying issh are either on exile or did something here and can’t come back.” He added that: “People like me been waiting my whole life time for this, to actually watch Erykah Badu perform live because I’ve been a fan forever. Plus, it’s her work freaking respect that!”

The Grammy Award-winner was scheduled to perform at the week-long Gambian music festival that kicked off last Friday (9 May). According to the Washington Blade, Badu’s trip to Gambia was scheduled to take place less than a month after she sang at a lavish birthday party for Swazi King Msawti III. The Swazi Observer reported Badu gave Mswati a $100 bill with a “special stone that she said would uplift His Majesty’s spirits when he was feeling down” during the 24 April event at one of the monarch’s numerous palaces, continued the Blade article.

“Erykah Badu has the basic human right to speak and to sing wherever she wants, unfortunately that is not a right that ordinary Swazis or Gambians have,” Jeffrey Smith of the Robert F. Kennedy Center for Justice and Human Rights told the Blade. “Freedom of expression, assembly, association, and freedom of the press are severely restricted in both of these countries.”

Badu is not the only musician who has faced criticism over plans to perform for leaders with questionable human rights records. According to observers, the Gambian dictatorship organises events like the Roots Festival, with the pretext of celebrating African heritage, but there is more to it than celebration. President Jammeh has in recent years invited scores of internationally renowned artists like Jamaine Jackson, Ousman Diallo alias Ouza, Thione Seck and Kumba Gawlo Seck, enticing them with millions of tax payers’ money to repair his tarnished image.

A recent Time article by Thor Halvorssen and Alex Gladstein of Human Rights Foundation states that: “If Badu bristles under criticism for entertaining King Mswati, she’ll really be frustrated by the world’s reaction when she performs at a concert this May sponsored by the dictator of The Gambia. After seizing power in 1994 military coup, Yahya Jammeh is best known for spending millions of dollars on private parties, for promising to inflict “the ultimate penalty” on homosexuals, for warning the UN that gays are “a threat to human existence”, for claiming that he can cure AIDS in three days, and for executing and disappearing hundreds of his critics. After her Swazi quagmire, perhaps Badu will reconsider her scheduled performance in The Gambia, where she would provide cover for yet another despot, this one a lot more murderous than King Mswati.”

Meanwhile, the Democratic Union of Gambian Activists (DUGA) has written an open letter to Jamaican reggae star Matabaruka, calling on him to disassociate himself from the festival organised by the Gambian leader. The human rights body says because of the revolutionary stance Jamaican have taken on issues affecting African people worldwide, it is necessary to inform Matabaruka of the repressive conditions in Gambia since Jammeh’s lift on to the “saddles of power”.

“During the struggle against apartheid, you, like the ‘stepping razor’, Peter Tosh and others took a principled stance without wavering. We believe that, once you become aware of the repressive conditions your Gambians brothers and sisters are subjected to, you will take the same stance as you did against apartheid. Our fight against tyranny in the Gambia must get the same attention as was given to ‘South Africa’ – Azania. The days of fighting in isolation are over; the struggle for African Liberation is one struggle. Touch one! Touch all!,” states the letter.

One response to “Gambia: Erykah Badu calls off concert for dictator Yahya Jammeh”