NEWS
Perfection as the enemy of the good: Weakening surveillance reform
28 May 2014
BY BINOY KAMPMARK 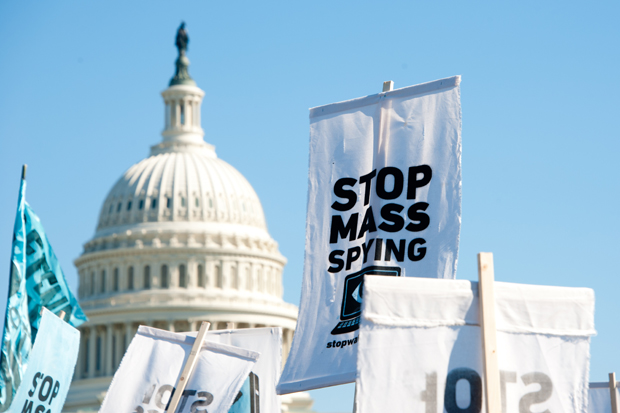 Last week saw a flurry of legislative to-and-fro on the Hill as the US House of Representatives pondered the passage of legislation aimed at ending bulk-collection by the US National Security Agency.  The USA Freedom Act, or HR. 3361, was passed on Thursday in a 303-121 vote, and was hailed by The New York Times as “a rare moment of bipartisan agreement between the White House and Congress on a major national security issue”.  Congressman Glenn ‘GT’ Thompson (R-Pa.) tweeted that he was the proud cosponsor of a bill “that passed uniting and strengthening America by ending eavesdropping/online monitoring.”

It was perhaps inevitable that compromise between the intelligence and judiciary committees would see various blows against the bill in terms of scope and effect.  When legislators want to posture about change while asserting the status quo, ambiguity proves their steadfast friend.  After all, with the term “freedom” in the bill, something was bound to give.

Students of the bill would have noted that its main author, Rep. Jim Sensenbrenner (R-Wi.), was also behind HR. 3162, known more popularly as the USA Patriot Act.  Most roads in the US surveillance establishment tend to lead to that roughly drafted and applied piece of legislation, a mechanism that gave the NSA the broadest, and most ineffective of mandates, in eavesdropping.

Then came salutatory remarks made about the bill from Rep. Mike Rogers[2], who extolled its virtues on the House floor even as he attacked the Obama administration for not being firm enough in holding against advocates of surveillance reform.  There is a notable signature change between commending “a responsible legislative solution to address concerns about the bulk telephone metadata program” and being “held hostage by the actions of traitors who leak classified information that puts our troops in the field at risk or those who fear-monger and spread mistruth to further their misguided agenda.”

Even as Edward Snowden’s ghost hung heavy over the Hill like a moralising Banquo, Rogers was pointing a vengeful finger in his direction.  There would, after all, have been no need for the USA Freedom Act, no need for this display of lawmaking, but for the actions of the intelligence sub-contractor. Privacy advocates would again raise their eyebrows at Rogers’s remarks about the now infamous Section 215 telephone metadata program under the Patriot Act, which had been “the subject of intense, and often inaccurate, criticism. The bulk telephone metadata program is legal, overseen, and effective at saving American lives.”

Such assertions are remarkable, more so for the fact that both the Privacy and Civil Liberties Oversight Board and the internal White House review panel, found little evidence of effectiveness in the program.  “Section 215 of the USA Patriot Act,” claimed the PCLOB, “does not provide an adequate basis to support this program.”  Any data obtained was thin and obtained at unwarranted cost.

Critics of the bill such as Centre for Democracy and Technology President Nuala O’Connor expressed concern at the chipping moves.  “This legislation was designed to prohibit bulk collection, but has been made so weak that it fails to adequately protect against mass, untargeted collection of Americans’ private information.”  In O’Connor’s view, “The bill now offers only mild reform and goes against the overwhelming support for definitively ending bulk collection.”

Not so, claimed an anonymous House GOP aide.   “The amended bill successfully addresses the concerns that were raised about NSA surveillance, ends bulk collections and increases transparency.”  Victory in small steps would seem to have impressed the aide. “We view it as a victory for privacy, and while we would like to have had a stronger bill, we shouldn’t let the perfect being the enemy of the good.”

Various members of the House disagreed.  Rep. Zoe Lofgren (D-Calif.) noted that the bill had received a severe pruning by the time it reached the House floor, having a change “that seems to open the door to bulk collection again.”  Others connected with co-sponsoring initial versions of the bill, among them Rep. Jared Polis (D-Colo.) and Rep. Justin Amash (R-Mich.) also refused to vote for the compromise.

What, then, is the basis of the gripe?  For one, the language “specific selection term”, which would cover what the NSA can intercept, is incorrigibly vague.  The definition offers the unsatisfactory “term used to uniquely describe a person, entity or account.”  What, in this sense, is an entity for the purpose of the legislation?  The tip of the iceberg is already problematic enough without venturing down into the murkier depths of interpretation.

Even more troubling in the USA Freedom Act is what it leaves out. For one thing, telephony metadata is only a portion of the surveillance loot.  Other collection programs are conspicuously absent, be it the already exposed PRISM program which covers online communications, Captivatedaudience, a program used to attain control of a computer’s microphone and record audio, Foggybottom – used to note a user’s browsing history on the net, and Gumfish, used to control a computer webcam.  (These are the choice bits – others in the NSA arsenal persist, untrammelled.)

Section 702 of the Foreign Intelligence Surveillance Amendments (FISA) Act, the provision outlining when the NSA may collect data from American citizens in various cases and how the incorrect or inadvertent collection of data is to be handled, is left untouched.  On inspection, it seems the reformist resume of the Freedom Act is rather sparse.

Ambiguities, rather than perfections, end up being the enemy of the good. Laws that are poorly drafted tend to be more than mere nuisances – they can be dangerous in cultivating complacency before the effects of power. Well as it might that the USA Freedom Act has passed, signalling a political will to deal with bulk-collection of data.  But in making that signal, Congress has also made it clear that compromise is one way of doing nothing, a form of sanctified inertia.

This article was posted on May 28, 2014 at indexoncensorship.org

Dr. Binoy Kampmark was a Commonwealth Scholar at Selwyn College, Cambridge and ran for the Australian Senate for the WikiLeaks Party with Julian Assange.He lectures at RMITUniversity, Melbourne.