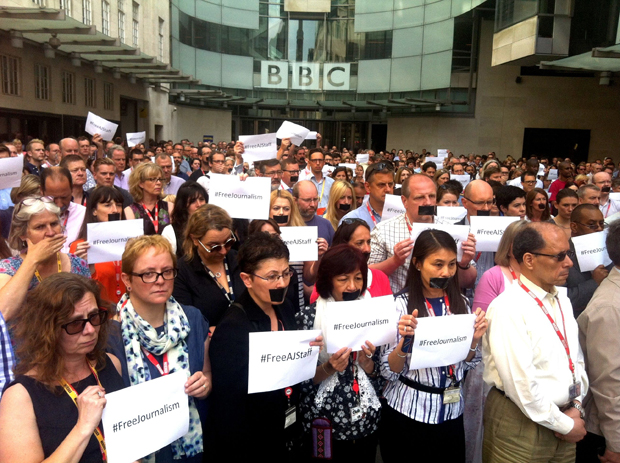 The usually bustling entrance of the New Broadcasting House in London was still filled to the brim with people this morning, but for one minute they were completely silent.

BBC staff, joined by fellow journalists from around the world, stood in silent protest at 9:41 am, exactly 24 hours from the sentencing of three Al Jazeera journalists to prison in Egypt. Peter Greste and Mohamed Fahmy were each handed down seven-year sentences, while Baher Mohamed was given ten years.

The three journalists were found guilty on Monday for spreading false news by a court in Cairo. Ten other journalists, including Al Jazeera’s Sue Turton and Dominic Kane, and Rena Netjes, a correspondent for Dutch newspaper Parool, were also sentenced in absentia to ten years.

The silent protest was orchestrated in hopes of fighting against these unjust practices and to raise awareness of the dangers and censorship many international journalists face.

BBC Director of News, James Harding, stood up and addressed the group: “They are not just robbing three innocent men of their freedom, but intimidating journalists and inhibiting free speech.”

The protestors held signs that read #FreeJournalism and #FreeAJStaff, and covered their mouths with tape in order to illustrate their frustration with the trial verdict.

Sana Safi, a presenter for BBC Pashto TV News, said: “When I heard the verdict, I was in shock because I’m from Afghanistan and we have seen more media freedom in the last few years, and I wasn’t expecting anything like that from a country like Egypt.”

Their looks were determined and their heads were held high as cameras flashed and captured the intense moment. Cowardice was not an option.

Nasidi Yahaya, a social media producer from BBC Hausa, said: “The verdict was so unfair, these guys were just doing their job. Journalists should not be silenced like this.”

The journalists from the BBC, Al Jazeera, and other news organisations standing together in solidarity will also be sending a letter calling on the Egyptian president to intervene in the situation.

The wait for their freedom begins.

This article was posted on 24 June, 2014 at indexoncensorship.org