Index speaks to Amberin Zaman, the critical Turkish journalist who was recently told to "know [her] place" in a public tirade by president-elect Erdogan 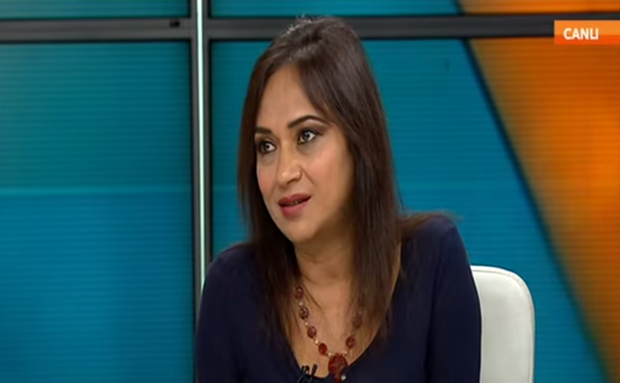 “A militant in the guise of a journalist, a shameless woman.” “Know your place.” “[Y]ou insult at a society of 99 percent Muslims.”

The comments from Recep Tayyip Erdogan — Turkey’s newly elected president and outgoing prime minister — were heard across the world. While he did not mention a name, it was the clear the woman in question was Amberin Zaman, a journalist for The Economist and Taraf. Erdogan’s tirade came during a campaign rally last Thursday in the city of Malatya, ahead of Sunday’s presidential vote. Zaman had expressed opinions critical of Erdogan during a TV discussion the night before.

Erdogan continued during a rally in Ankara on Saturday, calling her a “despicable woman” and saying she had insulted Islam. She has also been targeted online by Erdogan supporters, in what the Organisation for Security and Cooperation in Europe (OSCE) has labelled a “widespread smear campaign“.

“The pro-Erdogan camp emboldened by his very public insults against me continue to mob lynch me via the social media,” Zaman told Index on Censorship. “My Twitter feed is flooded with threats and profanities. Being called an enemy of Islam in a Muslim country, when radical groups like IS have Turkish members who are active Twitter users, puts me at physical risk and hobbles my work.”

She says she was unable conduct interviews on the streets on election day, “for fear of being recognised and attacked”.

This is not the first time Zaman has been targeted for speaking out against Turkish authorities. She was fired last year from Haberturk over articles critical of the government, and she was also one of the journalists reportedly wiretapped with the approval of Erdogan. As she said at a recent Index event on digital freedom, she is attacked online daily by pro-government trolls.

But Zaman is not the only member of the Turkish media under threat. According to recent figures there are 40 journalists behind bars in the country, making it one of the world’s worst jailers of press. Since 1992, 14 journalists have been murdered with impunity. Turkey stands at 154th out of 180 countries in the latest Reporters Without Borders Press Freedom Index, and its ranking has deteriorating over the past years.

In addition to Zaman’s case, there have been a number of other attacks on press freedom just over the past few days, as reported by the Index media mapping tool among others. Enis Berberoglu, editor-in-chief of Hurriyet, resigned on 8 August. The paper has denied that it was as a result of political pressure. However, in his attacks on Zaman during the Malatya rally, Erdogan specifically mentioned the owners of the TV channel she was on, Dogan Holding. Hurriyet is also owned by Dogan.

“The consensus is that he was pushed out but his departure coincided with the elections so it didn’t get the attention it deserved. But it is a further sign that media bosses will continue to cave in to power. It’s a tragic comment on the state of the Turkish media,” says Zaman.

The same day as Berberoglu’s resignation, investigative journalist Mehmet Baransu was beaten by police. The day after he was detained for tweeting about the incident, and about the Istanbul public prosecutor. There have also been reports that the Cihan news agency was restricted from covering the presidential election, with police ordered to keep journalists out of polling sites across the country.

The election also put the spotlight on issues surrounding biased media coverage in favour of Erdogan; something that was highlighted by observers after the vote. Zaman says it is difficult to measure the impact of the poor state of media freedom on the election and its outcome — Erdogan won comfortably after one round. But it was not, she says, “a level playing field”.

“Erdogan has indirect control over a broad swathe of media outlets, most crucially of television. So the opposition candidates received scant coverage, and the little they got in pro-government was more of a smear campaign to which they were unable to effectively respond. Intimidation of the media and of media bosses has created an environment of self-censorship where journalists fear losing their jobs,” she explains.

“Even the mildest criticism is no longer tolerated. It’s stifling.”

Despite the attacks from Erdogan and his supporters, Zaman says she is “very heartened by the thousands of messages of support I have received, including from pious Muslims”.

The Women’s Equality Monitoring Group, whose membership includes female journalists, academics and writers has called on Erdogan to apologise.

“Making a female journalist a target by calling her shameless for simply performing her job was the last link in a chain of sexist stances,” they said. “This attack was also an attempt to silence the few remaining critical voices in the media, which has been silenced with bribery, censorship and self-censorship.” The Economist have stated that they “stand firmly” by Zaman.

But as Erdogan has indicated intention to expand the powers of the presidency, Zaman is not optimistic about the future.

“Should he continue to run the government as he announced he would it is horrible news for journalists. Things can only get worse not better.”

This article was posted on August 15, 2014 at indexoncensorship.org

2 responses to “Turkey: Even mild criticism is not tolerated, says journalist labelled “shameless” by Erdogan”