This week marks the anniversary of the signing of the Contract of the Century, when BP began its 20 year relationship with the Aliyev family 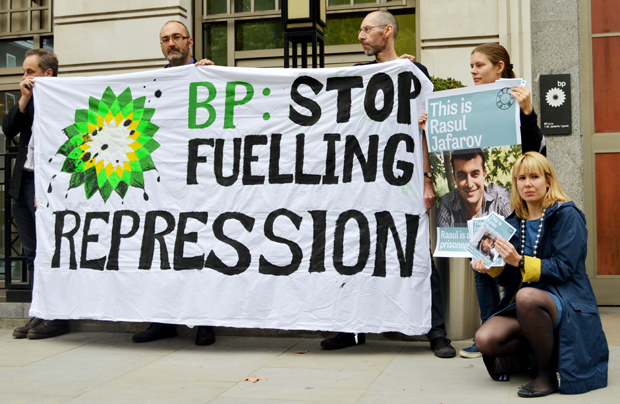 Protesters called on global oil giant BP to reassess its connections with the regime in Azerbaijan at a gathering outside the company’s London headquarters.

This week marks the anniversary of the signing of the Contract of the Century, when BP began its 20 year relationship with the Aliyev family. The protesters argue that BP’s role in Azerbaijan has provided the former president, Heydar Aliyev, and the current president, his son Ilham, with considerable power and money, facilitating the country’s repressive regime and hampering democracy. 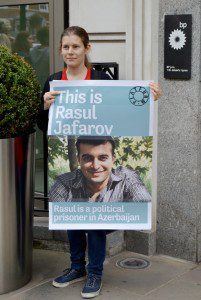 There are currently 98 political prisoners being held in Azerbaijan and the threat of arrest others is also high. Recently, prominent activists Leyla and Arif Yunus and Rasul Jafarov have been jailed, as well as human rights lawyer Intigam Aliyev.

Ramute Remezaite, a human rights lawyer who worked in Azerbaijan, told Index on Censorship: “It’s very important to tell BP that it is totally intolerable to cooperate with the government of Azerbaijan, it’s repressing its own people and putting them to prison for reasons such as exercising their fundamental human rights.

“Another reason why it’s very important to be here and to hold this action, is as solidarity with our colleagues in Baku because such an action is impossible these days in Azerbaijan — people standing in front of the BP office in Baku would be immediately arrested and sentenced to one, two, three weeks in prison.”

A group of Azerbaijani civil society organisations plan to send a letter to Bob Dudley, group chief executive of BP, demanding that the company call on the Aliyev government to release all political prisoners, and ensure that other prominent human rights defenders, such as Emin Huseynov, will not face arrest.

Emma Hughes from Platform London, who organised today’s protest, told Index: “We’re here today in solidarity with Azerbaijani civil society who are calling on BP to raise the case of the 98 political prisoners in Azerbaijan and also to drop their sponsorship of the 2015 Baku European Olympic Games.”

Also attending the protest, alongside Platform London and Index on Censorship, were representatives from Campaign Against Climate Change, Article 19 and BP or not BP. 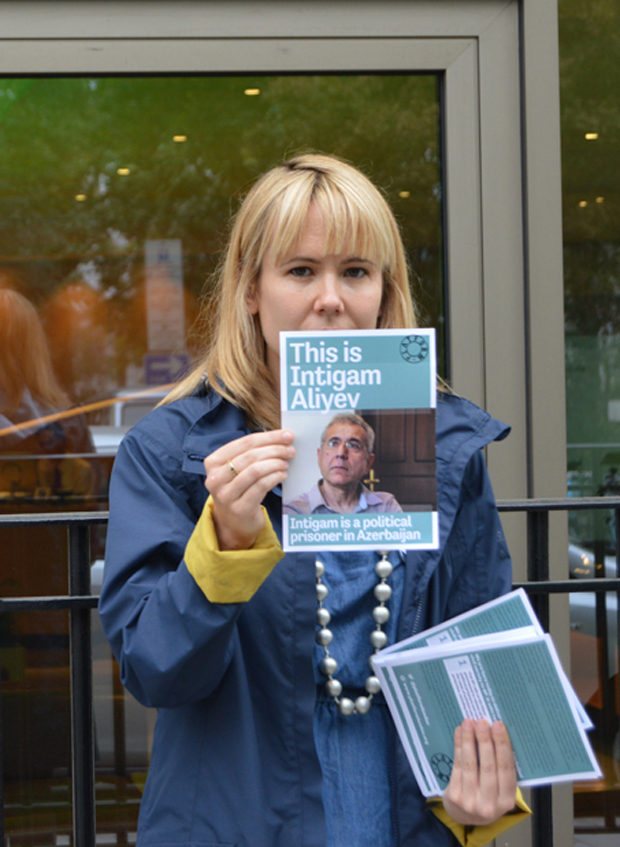 Claire James, from Campaign Against Climate Change, told Index: “I’m here partly in solidarity with political prisoners but also because our world’s addiction to fossil fuels is overcoming any common sense about what we’re doing to the planet and it should not also be overcoming human rights.”

In conclusion to the letter, Azerbaijani civil society asks that BP ceases its activities in the country until such times as a “democratic and accountable government is in power”.

This article was posted on 17 Sept 2014 at indexoncensorship.org