Clampdown by authorities on human rights groups in Azerbaijan continues 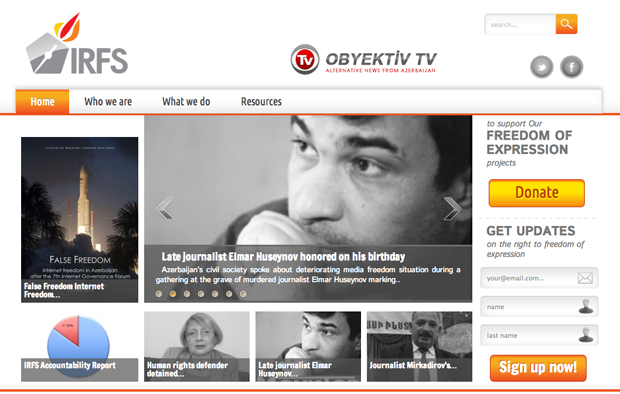 The offices of Azerbaijani press freedom organisation Institute for Reporters’ Freedom and Safety (IRFS) were on Friday searched by police – the latest in a new clampdown by authorities on human rights groups in Azerbaijan. Human rights lawyer Intigam Aliyev also had his home searched, and has been sentenced to three months pretrial detention.

The IRSF offices were today surrounded by police officers according to reports from Azerbaijan. There are unconfirmed reports that Emin Huseynov, the head of the organisation, has been detained. He was already under a travel ban.

Over the past two weeks, human right defenders Leyla and Arif Yunus and Rasul Jafarov have been sentenced to three months of pretrial detention, facing charges including high treason, state betrayal and tax evasion. One of the country’s few remaining independent newspapers, Index Award winner Azadliq, has been forced to suspend publication due to financial troubles.

IRFS has been reporting on these and other instances of apparent state targeting of opposition voices. The NGO was founded in 2006, “in response to growing government restrictions on freedom of expression and freedom of press,” according to their mission statement. The latest global press freedom index from Reporters Without Borders ranks Azerbaijan at 160 out of 180 countries, and the recent estimates puts the number of political prisoners in the country at over 140.

The recent cases have taken place against a backdrop of heightening tensions between Azerbaijan and neighbouring Armenia, which so far has left at least 14 people dead. President Aliyev on Thursday published a series of tweets on his personal Twitter account which seemed to threaten war with Armenia. The troubled relationship between the two countries has also played a part in cases against dissidents, including Leyla Yunus who has been accused of spying for Armenia.

In May, Azerbaijan assumed chairmanship of the Council of Europe’s (COE) Committee of Ministers, whose tasks include “ensure[ing] that member states comply with the judgments and certain decisions of the European Court of Human Rights”.

In a statement on Friday, the COE said Secretary General Thorbjørn Jagland has “revealed his deep concern at the arrest of Azerbaijan human rights defender Leyla Yunus and the prosecution case against her husband Arif”.

“By stifling dissent, Azerbaijan is failing to comply with its international obligations which require safeguarding freedom of expression, assembly and association. It is necessary that Azerbaijan reverse the situation,” COE Commissioner for Human Rights Nils Muiznieks has told Azerbaijani media.

Index on Censorship, along with 60 other NGOs, has called for the immediate and unconditional release of Leyla and Arif Yunus and Rasul Jafarov. Today Index reiterates this call and raised its concerns with Britain’s Foreign and Commonwealth Office.

“It is deeply worrying that while international attention is directed at conflicts elsewhere, Azerbaijan appears to be resuming oppression of dissent,” said Jodie Ginsberg, CEO of Index on Censorship. “This is a country showing blatant disregard for human rights while presiding over an institution that describes itself as the continent’s ‘leading human rights organisation.’ The fellow members of the Council of Europe must do more to show Azerbaijan its actions must cease immediately.”