In his new ebook, tech expert Jamie Bartlett describes what he sees as the long-term ‘Snowden effect’: the explosion of new ways to keep online secrets and protect privacy, and the challenges that presents for state security services. In this extract, Bartlett uncovers some of the more revolutionary plans in the privacy pipeline. 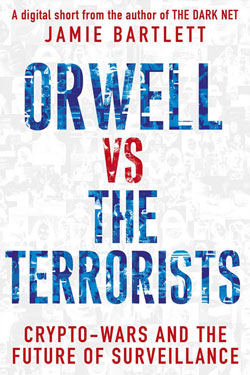 Extract from Orwell vs the Terrorists by Jamie Bartlett.

Motivated by an honourable desire to protect online freedom and privacy, hundreds of computer scientists and internet specialists are working on ingenious ways of keeping online secrets, preventing censorship, and fighting against centralised control. A veritable army motivated by a desire for privacy and freedom, trying to wrestle back control for ordinary people. This is where the long-term effects will be felt.

Soon there will be a new generation of easy-to-use, auto-encryption internet services. Services such as MailPile, and Dark Mail – email services where everything is automatically encrypted. Then there’s the Blackphone – a smart phone that encrypts and hides everything you’re doing. There are dozens – hundreds, perhaps – of new bits of software and hardware like this that cover your tracks, being developed as you read this – and mainly by activists motivated not by profit, but by privacy. Within a decade or so I think they will be slick and secure, and you won’t need to be a computer specialist to work out how they work. We’ll all be using them.

And there are even more revolutionary plans in the pipeline. An alternative way of organising the internet is being built as we speak, an internet where no one is in control, where no one can find you or shut you down, where no one can manipulate your content. A decentralised world that is both private and impossible to censor.

Back in 2009, in an obscure cryptography chat forum, a mysterious man called Satoshi Nakamoto invented the crypto-currency Bitcoin.* It turns out the real genius of Bitcoin was not the currency at all, but the way that it works. Bitcoin creates an immutable, unchangeable public copy of every transaction ever made by its users, which is hosted and verified by every computer that downloads the software. This public copy is called the ‘blockchain’. Pretty soon, enthusiasts figured out that the blockchain system could be used for anything. Armed with 30,000 Bitcoins (around $12 million) of crowdfunded support, the Ethereum project is dedicated to creating a new, blockchain-operated internet. Ethereum’s developers hope the system will herald a revolution in the way we use the net – allowing us to do everything online directly with each other, not through the big companies that currently mediate our online interaction and whom we have little choice but to trust with our data.

Already others have applied this principle to all sorts of areas. One man built a permanent domain name system called Namecoin; another an untraceable email system call Bitmessage.

Perhaps the most interesting of all is a social media platform called Twister, a version of Twitter that is completely anonymous and almost impossible to censor. Miguel Freitas, the Brazilian who spent three months building it, tells me he was sparked into action when he read that David Cameron had considered shutting down Twitter after the 2011 riots. ‘The internet alone won’t help information flow,’ Freitas says, ‘if all the power is in the hands of a few people.’

This trend towards decentralised, encrypted systems has become an important aspect of the current crypto-wars.† MaidSafe is a UK start-up that, in a similar way, wants to redesign the internet infrastructure towards a peer-to-peer communications network, without centralised servers. Its developers are building a network made up of contributing computers, with each one giving up a bit of its unused hard drive. You access the network, and the network accesses the computers. Everything is encrypted, and data is stored across the entire network, which makes hacking or spying extremely difficult, if not impossible.

Nick Lambert, the Chief Operating Officer for MaidSafe, explained to me the vision. When you open a browser and surf the web it might feel like a seamless process, but there are all manner or rules and systems that clutter up the system: domain name servers, company servers, routing protocols, security protocols. This is the stuff that keeps the internet going: rules that route your request for traffic, servers that host that web page you’re after, systems that certify for your computer that the site you’re trying to access isn’t bogus. Because it all happens at the speed of light, it doesn’t feel cluttered up, of course.

But all these little stages and protocols create invisible centres of power, explains Nick – be they governments, big tech companies or invisible US-based regulators – and they are all exercising control over what happens on the net. That’s bad for security, and bad for privacy. MaidSafe strips all this out. The end result, says Nick, will be a network that is very difficult to censor and offers more privacy. ‘Even if we wanted to censor users’ content, we couldn’t – because with this system we don’t know or have access to anything the users do.

They’re in control.’ Nick accepts some people will misuse it – but that’s true of almost any technology. ‘Kitchen knives can cause harm,’ he says, ‘but you wouldn’t ban kitchen knives.’

As I see it, this powerful combination of public appetite and new technology means staying hidden online will become easier and more sophisticated. It might feel unlikely at a time when every click and swipe is being collected by someone somewhere, but in the years ahead, it will be harder for external agencies to monitor or collect what we share and see; and censorship will become far more difficult. A golden age of privacy and freedom. Perhaps.

* You’ve probably heard of this pseudonymous digital cash because it was, and still is, the currency of choice on the illegal online drugs markets.

† And increasingly, I predict, politics. Although no political parties – save the occasional fringe party – have given any thought to what crypto-currencies might mean. What does a modern centre-left party think of crypto-currency, or of blockchain decentralisation? They have no idea.

@JamieJBartlett is the director of Centre for the Analysis of Social Media, Demos and a tech blogger for @telegraph.

This extract was published on 12 February 2015 at indexoncensorship.org with the author’s permission.