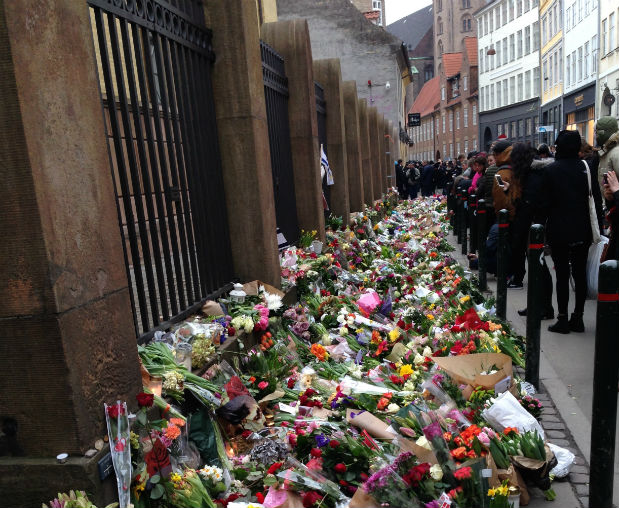 Flowers left outside the Copenhagen synagogue where a man was killed (Photo: Karen Mardahl/Flickr, under Creative Commons license. The image has been cropped.)

How does one avoid being a potential target for murder by a jihadist? If you’re Jewish, you probably can’t, unless you attempt to somehow stop being Jewish (though I suspect, much like the proto-nazi mayor of Vienna, Karl Lueger, IS reserves the right to decide who is a Jew).

This seemed to be the message coming after last weekend’s atrocity in Copenhagen. Oddly, I just found myself hesitating while typing the word “atrocity” there. Felt a little dramatic. Because already, amid the condemnations and what ifs? and what abouts? that have dogged us since this wretched year kicked into gear with the murders in Paris, already, the pattern seems set. Young Muslim men in Europe get guns, and then try, and for the most part succeed, in killing Jews and cartoonists, or people who happen to be in the same room as cartoonists. Then the condemnation comes, then the self-examination: what is it that’s wrong with Europe that makes people do these things? The things we definitely know are wrong are inequality and racism, so that’s where we focus our attentions. Europe’s past rapaciousness in the Middle East, or its recent and current interventions: these, on a societal level, are believed to be mistakes, so they too, must be examined (it could be argued that non-intervention, particularly in Syria, has been at least as much of a factor).

What else? Maybe we caused offence. Maybe we crossed a line when we allowed those cartoonists to draw those pictures. Maybe that’s it. We’ve offended two billion or so Muslims, and of course, some of them are bound to react more strongly than others. So we’d best be nice to them in future (we leave the implied “or else” hanging). And being nice means not upsetting people.

This is, as I’m fairly certain I’ve written before, a patronising and divisive way of looking at the world. Patronising because of the casual assumption that Muslims are inevitably drawn to violence by their commitment to their faith, and divisive both because it sets a double standard and because it entrenches the notion that Muslims are somehow outside of “us” in European society.

That divisiveness is not merely useful to xenophobes and Islamophobes. It is equally important in the agenda for many types of Islamist.

Take a small but instructive example. The BBC Two comedy Citizen Khan is possibly the most normal portrayal of Muslims British mainstream comedy has ever seen. The lead character started life as an absurd “community leader” in the brilliant BBC 2 spoof documentary Bellamy’s People, before morphing into an archetypal bumbling silly sitcom patriarch in his own successful show.

Citizen Khan is a classic British sitcom in which the family happen to be practicing Muslims. It is not cutting-edge comedy, boldly taking on racial and religious blah blah blah; it’s family entertainment.

Cause for celebration, surely, that practicing Muslims are being portrayed as normal people rather than radical weirdos? Not according to the risibly-titled Islamic Human Rights Commission, a small group of Ayatollah Khomeini fans who have nominated Citizen Khan for its annual Islamophobia award, claiming the show features “Muslims depicted as racist, sexist and backward. Obviously”. They don’t want to see Muslims on television as normal people, because that would undermine the division they seek to engender. I doubt any of the people at the IHRC who suggested Citizen Khan was Islamophobic are genuinely hurt or offended by the programme; if they are, it’s because it features a portrayal of Muslim people, by Muslim people, that they cannot control. It’s really got nothing to do with “offence”.

Likewise, I refuse to believe that the killers of Paris or Copenhagen have been sitting around stewing for years over “blasphemous” cartoons. To imagine that these murders took place because of perceived slight or offence is to cast them as crimes of passion. I don’t buy it. These were, at best in the eyes of the killers, legal executions for the crime of blasphemy, carried out because their interpretation of the law demanded that they do so.

The same interpretation of the law means that these men are allowed, mandated even, to kill Jews. So that is what they do.

However much cant we spill about “no rights without responsibilities” (that is, the preposterous “responsibility” not to offend), the fact that people are being murdered for who they are rather than what they did should make us realise that there is no responsibility we can exercise that will mitigate the core problem: a murderous totalitarian ideology has taken hold. It has territory, it has machinery, it has propaganda, and it has a certain dark appeal, just as totalitarian ideologies before have had. ISIS or Daesh or whatever you choose to call it is calling people to its cause. AQAP competes for adherents.

Some will point to the previous violent criminal records of the killers in Paris and Copenhagen and say “You see? They were mere thugs: the ideology barely comes into it.” But come on, who do you think the Brownshirts recruited? Bookish dentists? The fact that thugs are drawn to a thuggish ideology mitigates neither.

This week, Denmark’s only Jewish radio station went off air due to security concerns. This is where responsibilities before rights leads us. Shut up, keep quiet, and if something happens then it’s your fault for being irresponsible. Irresponsible enough to wish to practice your culture and religion freely. Irresponsible enough to “offend” murderers with your very existence. This line of thinking is not just cowardly, it is accusatory.

The correct answer to the request that we show responsibility with our rights, is, as revolutionary socialist James Connolly put it, “a high-minded assertion” of rights themselves. Not just the right to speak freely, but the right to live freely.

This article was posted on 19 February 2015 at indexoncensorship.org

2 responses to “Padraig Reidy: We can’t allow responsibilities to come before rights”