REPORT
Words and Deeds: Incitement, hate speech and the right to free expression

The importance of free expression is as great as ever, as is the need to debate openly difficult issues – ones which may cause pain, offence, anger. Nobody ever said free expression was easy. 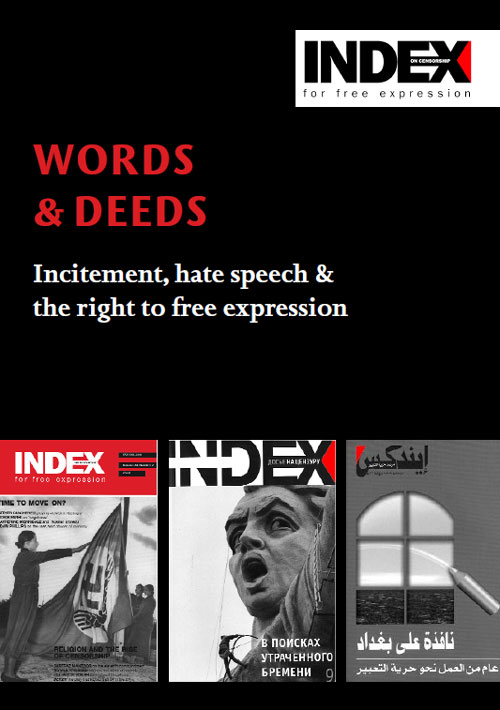 This collection was prepared for the EU NGO Forum that took place on 8-9 December 2005 and revised in 2006.

At the end of the Maastricht summit in l992, the Council of Ministers reported on what they saw as a paradox of history: that racism had increased as democracy had spread through the post-communist world. Not such a paradox really. As Hans Magnus Enzensburger once said:‘With democracy, all the dirt comes out.’

Index believes that free expression is the freedom on which all others are based. Ronald Dworkin famously said in its pages that free speech is what makes people feel human, makes them feel their lives matter. But we also need to be clear about our fierce defence of free expression – that there are prices to be paid for it – and we need to be clear about the cost, and who is paying it.

Hate speech – abusive, dehumanising, inciting discrimination and violence – is an integral part of the ‘dirt’ that goes with democracy, often directed at ethnic minorities, gays or women. It is certainly the most troubling matter for people who believe in free speech, and there has been fierce debate over the years about that difficult borderline between free speech and the demand for equality of respect – not least in the pages of Index on Censorship over its 33 years of existence.

But then, on 11 September 2001, the world changed, and hate speech acquired another, newer relevance. The ‘war on terrorism’ (a war that may never end, according to US Vice President Dick Cheney) put civil liberties under threat worldwide. And since then the right to free expression has too often become a fragile filling, sandwiched between the imperatives of security and fears about acts of terrorism. In these dangerous times, hate speech is centre stage, and the ways in which we respond to it are crucial to our future.

The importance of free expression is as great as ever, as is the need to debate openly difficult issues – ones which may cause pain, offence, anger. Nobody ever said free expression was easy. Index’s purpose is to do its small part in creating a world in which the right to speak for oneself becomes the condition for allowing those who speak antagonistic moral languages to hear each other. We hope Words & Deeds will play its part.

With essays and contributions by: