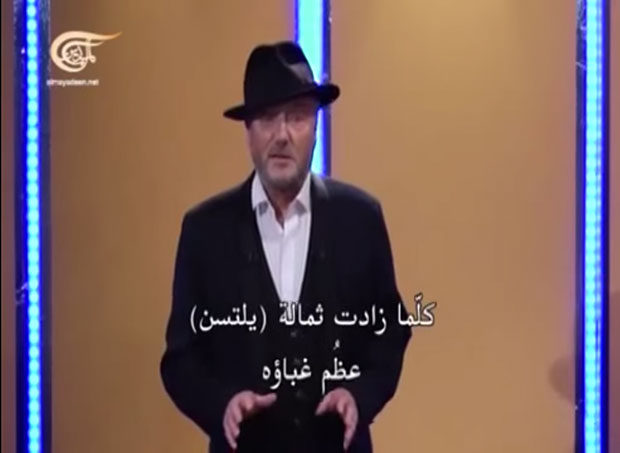 TV presenter George Galloway has taken to wearing a black fedora, indoors. I know this, because I have seen him doing so on at least one of his TV shows.

It’s a strange look, somewhere between a puffy Nathan Detroit, though combined with a black suit and white shirt, the hat also evokes Robert Mitchum’s chilling Harry Powell in Night of the Hunter.

Why has George Galloway started wearing a hat indoors? What has taken hold of him? What kind of person wears a hat indoors anyway? The only people who really get away with being pictured in hats, indoors and out, are National Hunt trainers and rabbis. And come to think of it, you rarely see a National Hunt trainer indoors. They’re usually outside, training horses, or watching horse races or being interviewed about how well (or sometimes poorly) their horse did in the race.

I can say with relative certainty that Galloway is not a National Hunt trainer. I am a bit more nervous about declaring whether or not he is a rabbi. Issues between George and some Jewish people being fraught of late, I would not like anyone to think that an assertion of Galloway’s non-rabbiness was a suggestion of anything else.

Galloway has been in the news after his solicitors issued letters demanding apologies from various people who tweeted and retweeted a comment by Guardian columnist Hadley Freeman, who had tweeted about Galloway having “said and done” things she believed “crossed the line” between being “anti-Israel” and “anti-Semitic”.

Galloway tweeted that he would sue. Freeman offered to delete the tweet (and subsequently did). But all in vain: Galloway had made his mind up, telling Freeman “too late”. He also warned others against retweeting Freeman’s original post. Subsequently it has emerged that Galloway’s lawyers are writing to Twitter users demanding not just an apology, but £5000+VAT by varying dates in March to cover the cost of sending the letter.

The solicitors firm, Chambers of Bradford, are not widely known as libel specialists. You would think, given the changes in libel laws in recent years, that one would make sure your lawyers knew what they were doing.

Chambers appear to be focused on immigration, serious crime and fraud and personal injury, among other topics. But above all, they are, according to their own website “calculated risk takers”, who are “not afraid to take on challenges that would daunt many others”.

They boast that their ethos “is to ensure that the ordinary person has access to good quality legal advice as public bodies, insurance companies & multi-national companies which has led us to take on many ‘David & Goliath’ legal struggles for justice”.

This does not seem to tie in with the pursuit of one Twitter user who received a letter from Chambers demanding money. That person, with only 70 followers on Twitter, told the Guardian: “I’m not a politician. I’m not remotely influential. I deleted it. I have been suffering terrible health problems [since receiving the letter]. I’m on antidepressants and suffering from chest pains.”

Chambers’ apparent risk-taking, would seem to have backfired rather spectacularly.

Private Eye magazine said it had “drawn the letter to the attention of the Solicitors Regulation Authority (SRA) which takes a dim view of this sort of ‘speculative invoicing’”.

Meanwhile, lawyers including David Allen Green, Mark Lewis and Mark Stephens, vastly experienced in free speech, libel and privacy, have been offering support to the recipients of the letters. Some lawyers are apparently working with the people behind the “SuedByGalloway” twitter account, which is giving anonymous advice.

Mark Lewis commented “Mr Galloway’s spokesman says that the letters weren’t shown to the client before they were sent. That is a matter of practise and the SRA must investigate”. (McKay has subsequently told Index on Censorship that Mr Galloway had seen the letters, and it was McKay who had not).*

There is a temptation to think what might happen if all these cases — since each tweet is a separate action — did come to court. As with all libel cases, a lot is down to semantics: what exactly does Freeman’s original tweet really mean? Does it mean what Galloway’s solicitors letters’ take it to mean?

And then there is the context of the Defamation Act 2013, which requires that a claimant show that a statement “has caused or is likely to cause serious harm to the reputation of the claimant”.

Moreover, there is the new defence of “honest opinion”, in which a defendant need not prove the absolute truth of the statement (on a topic such as this, how could one do that?) but that he or she sincerely held the view stated as an opinion, and that an honest person “could have held the opinion on the basis of any fact which existed at the time the statement complained of was published”.

It would be genuinely interesting to see if and how a court could draw a line between “staunch anti-Zionism” and anti-Semitism, but in the end, I’m not sure how much use it would be for anyone. Most hate-crime laws already come down to circumstance and perception, just as libel cases, and particularly those involving unprovable abstracts, can only really come down to people’s individual views.

This case is just a manifestation of the usual Galloway bluster. It’s entirely feasible that he was insulted by Freeman’s comment, but his pursuit of her and the people who retweeted her, even after apologies and deletions, is petty and thin-skinned. It is not the behaviour of a gentleman. But then, neither is wearing a hat indoors.

* This article was updated on March 5, 2015, to reflect that Ron McKay told Index on Censorship that Galloway had seen the solicitors’ letters before they were sent

This column was posted on March 5, 2015 at indexoncensorship.org