Index on Censorship calls on the Malaysian authorities stop the ongoing harassment of award-winning cartoonist Zunar. 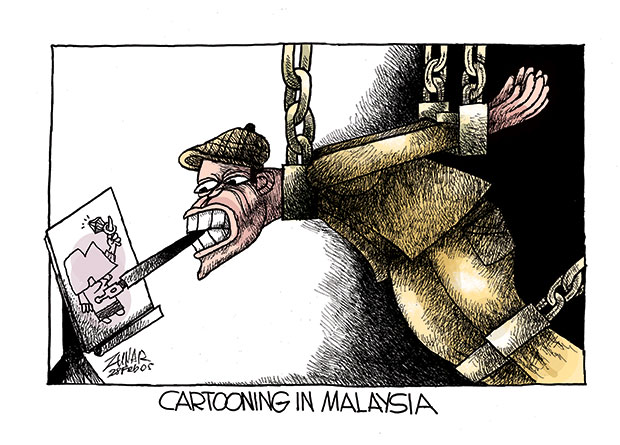 In March, Index on Censorship commissioned cartoonists to give their take on free expression in the past 12 months. Zunar submitted the above.

Malaysian political cartoonist Zulkiflee Anwar Haque “Zunar” was charged with nine counts of sedition for tweets posted following a controversial court ruling. He could be sentenced to 43 years in prison if convicted. He pleaded not guilty. His bail was set at 13,500 RM (£2500.21).

Zunar had reported on 1 April that he has been told that he will be charged under the country’s sedition act.

“My lawyer had just informed me that the police had served a notice to charge me to court under the sedition act over my tweet posting dated 10 of February 2015 on Anwar Ibrahim ruling,” Zunar wrote in a statement ahead of the 3 April court date.

The cartoonist has been repeatedly targeted for his editorial cartoons that critique the Malaysian government, which has banned much of Zunar’s work and repeatedly subjected him to raids, arrest and detainment.

One of the tweets included a cartoon criticising Malaysian Prime Minister Najib Razak’s involvement in Ibrahim’s case. That case saw the country’s political opposition leader sentenced to five years for sodomising a former employee. Ibrahim says that the charges are politically motivated.

According to Zunar, the charge he expects on 3 April would be under section 4(1) C of the sedition act, carrying a maximum penalty of three years in prison, a £918 fine, or both. After he posted the tweet in February, he was arrested and detained for three days. During the detention, the police also opened up separate investigation on his cartoon books Pirate of Carry BN and Conspiracy to Imprison Anwar.

Zunar said that he has been advised by his lawyer not to comment about the case in detail.

“I would like to reiterate that the use of sedition act will not silence me. I will keep exposing the corruptions and wrong-doings of the government,” Zunar wrote.

“Index calls on Malaysia to drop these latest charges against Zunar, which are a blatant attempt to stifle free expression and dissent in the country,” Index on Censorship CEO Jodie Ginsberg said.

Zunar has been subject to official harassment for his work taking corruption to task.

On 28 January, Zunar’s office was raided while he was on speaking tour in London. Authorities confiscated more than 150 books. That raid was made under printing presses and publications act, the sedition act and the Malaysian penal code.

In earlier raids on his office more than 500 copies of Zunar’s books were confiscated in two separate raids to his office by the authorities. Authorities also targeted printers, vendors and bookstores around the country and their owners were warned not to print or sell Zunar’s books.

On 6 November 2014, three of his assistants were arrested and taken to the police station for selling his latest cartoon books. A few days later, the webmaster for Zunar’s website and online bookstore was called for questioning by the police under the sedition act.

The police have asked the online payment gateway that handles his book transactions to disclose the list of customers who have purchased his books through official website, zunar.my, according to Zunar’s statement.

On 20 November, Zunar was questioned at by Kuala Lumpur police from the classified crime section. That investigation was triggered by two complaints lodged against him.

This is Zunar’s second investigation under the sedition act for cartooning — the first was in September 2010, when he was arrested and detained for two days. In addition, five of his books — Perak Darul Kartun, 1 Funny Malaysia, Isu Dalam Kartun Vol. 1, 2 and 3 — were banned by the Malaysian home minister from 2009 to 2010.

In 2011, Zunar was conferred Courage in Editorial Cartooning Award by the Cartoonist Rights Network International

In his statement, Zunar pledged that his work against corruption will continue.

“The ‘Fight Through cartoons’ will carry on with more fire. I will keep drawing until the last drop of my ink.”