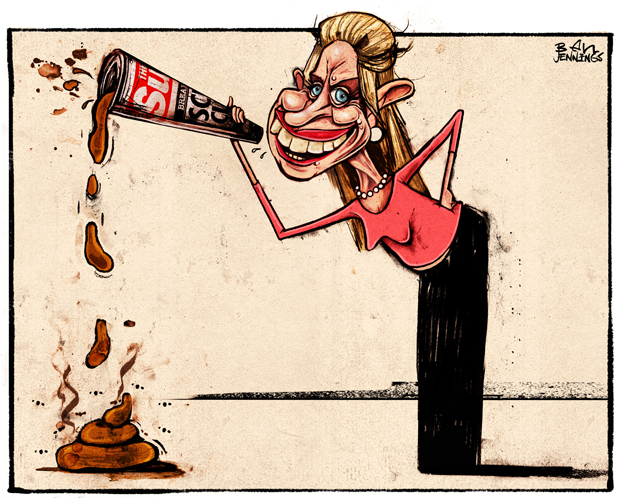 What if your job, your career, was winding up an entire nation?

That’s it. Sure, you have a column in a national newspaper. But what can you really do with it? You can’t really share your thoughts on the common toad, or tell delightful stories about your children misunderstanding foreign words, much less offer some insight into the workings of the modern world. Sure, you can chuck the odd piece of light relief in the sidebar or the basement, but that’s not what people are here for. We’ve come to your column to be thrilled by your outrageous views, and thrilled we will be.

Last time round it was people giving food to, and receiving food from, charity.

“SAY the words food bank” La Dolce ‘Opkina began, “and I am supposed to put on my concerned face and proffer up a can of beans.”

Where’s this going Katie? Where could this possibly be going?

“But all I’ve found in the back of my cupboard is two fingers. And they don’t belong to a Kit Kat.”

BOOM! Gotcha. I mean, it makes no sense. If it’s the fingers at the end of her arm she’s using, why are they in the back of the cupboard? Unless, maybe, she is SO outrageous that she keeps a special V-flipping apparatus in her cupboard, as her doctor has advised her that the constant extension and retraction of her index and middle finger was putting her in serious risk of chronic RSI. But then, if you were using it that much, you wouldn’t keep it in the back of the cupboard. You’d have it on the hall table, perhaps. Or in a little belt-mounted pouch, like a techie’s mobile phone, ready to unleash, cosh-style, upon passing do-gooders, bed-wetters, namby-pambies, oiks, poshos, hippies, liberal elitists, ignorant yokels, EUROCRATS, trendy vicars, Trots, gypsies, useless husbands, trashy wives, “gay rights” activists, lesbo-feminists and everyone else you might bump into at a reasonably-sized community festival in a reasonably-sized town.

It must be exhausting keeping track of this roll call of resentment. It must be wearing to have to be angry every week. How draining to have a public persona dedicated to hating everything and everyone.

And then there is the fact that outrage is a substance which can be addictive, but to which people can also develop a considerable tolerance. In order to keep us interested — and quite possibly to keep herself interested also — Hopkins has to keep upping the dose, until eventually we get to the point where she’s describing poor African people drowning in the sea as cockroaches and everyone suddenly stops and thinks “oh”.

The problem the serial controversialist who has nothing else to trade on faces is that the only way to go is down. The very nature of the job and the stuff you are peddling means you must, inevitably, end up overstepping the mark. In the case of Jeremy Clarkson, a carnival of boorishness ended in violence, where it had to. Hopkins seems to have survived, but she’s Zugzwanged herself: tone down the schtick and she becomes pointless; the only other move available is directly into the abyss. This is the fate of the wind-up merchant.

Satirists hold out no such (perverse) hope. The world is awful, the world has always been awful, and the only way to get through it is to laugh and hope we can make some tweaks around the edges. It is curious then, that from Private Eye to Charlie Hebdo, satire is often linked to campaigning journalism in the same publication.

Charlie has once again been in the news after several US-based authors refused to take part in a gala in honour of the magazine hosted by PEN American Center.

The writers’ heckles were raised by what they saw as racist cartoons run by Charlie in the past. Among these were one of a black politician portrayed as a monkey, and Nigeria girl victims of Boko Haram portrayed as “welfare queens”. Of course, at face value, these seem racist (though it is worth noting that it was not racist cartoons that saw Charlie’s staff slain: it was cartoons that refused to obey religious taboo).

What the US critics failed to acknowledge was that all satire is reactive: the cartoons did not simply spring unprompted from the cartoonists’ pens. The case of the ape cartoon was a reaction to far right portrayals of the minister, and the accompanying text very clearly mocked the Front National’s leader Marine Le Pen. As Irish novelist and Charlie columnist Robert McLiam Wilson pointed out:

“Without the snipped-off text underneath, and the knowledge of the lamentable tosh it was lampooning, of course Charlie would seem racist. It would seem racist to me too. But to strip the image of its fundamental components like this is akin to saying the incomparable Jonathan Swift was a baby-eating Nazi and that A Modest Proposal was actually a cookbook.”

Satire must toy with what it sets out to mock: otherwise it is meaningless and unintelligible. Sometimes the controversy of the likes of Hopkins and the irony of Charlie can look, at first glance, identical.

And sometimes not: While Hopkins was describing “cockroaches” drowning in the Mediterranean, Charlie was echoing the refrain of many: “A Titanic every week,” with a cartoon depicting a white woman singing My Heart Will Go On while a despairing migrant begs her to “shut up” (Ta Guelle).

Bracing? Sure. But humanising, too. As satire should be and controversialism never is.

This column was posted on 30 April 2015 at indexoncensorship.org