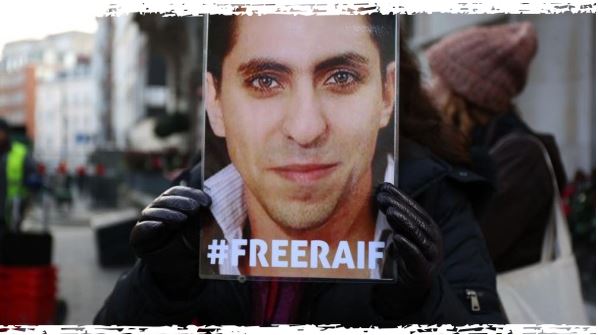 Activist and blogger Raif Badawi was first arrested on 17 June 2012. Three years later he remains in prison on charges that are widely believed to be politically motivated.

Badawi had already spent almost two years in prison before being convicted in May 2014 for insulting Islam and founding a liberal website. He received a fine of 1 million riyals (£175,000) and a ten-year prison sentence. In addition, the court in Jeddah sentenced Badawi to 1,000 lashes.

On 9 January 2015, after morning prayers, Badawi was flogged 50 times. This punishment was due to continue every Friday until he has received a total of 1,000 lashes. However, subsequent floggings have not gone ahead, initially because Badawi was deemed not to have recovered sufficiently from the previous punishment. No explanation has been given for the postponement of further floggings.

Meanwhile, his lawyer and brother-in-law Waleed Abdulkhair, is serving 15 years in prison, for his peaceful activism.

Index on Censorship joins English PEN in calling for Badawi’s sentence of flogging to be overturned immediately, as well as for his conviction to be quashed and for him to be released unconditionally. We also call for the immediate release of Abdulkhair.

To mark the third anniversary of Badawi’s arrest, English PEN have organised a Day of Action which Index will join, as well as encourage our supporters to do so.

Deliver letter to Prime Minister
Join organisations and individuals actively campaigning for Raif Badawi’s release, including Baroness Glenys Kinnock, comedian Kate Smurthwaite and activist Peter Tatchell. You can read the full text of the letter and add your name here.

Public Meeting
Representatives of campaigning organisations will come together with experts on Saudi Arabia and MPs to discuss and consider how best to take the campaign forward.

Take Action
We hope that activists across the UK and the world will join this Day of Action by holding events in your local area, lobbying the Saudi authorities, and sending messages of support.

You may also wish to include the following Twitter handles:

Send a letter of appeal

Write to the Saudi authorities (a sample letter is available below) – please cc: [email protected]

Sign Amnesty’s petition for Raif Badawi’s release, and call on the British Ambassador to Saudi Arabia to take urgent action

Send a message of support

Letter to the authorities

I am writing to you as a supporter of English PEN, the founding centre of the international association of writers, to express serious concern for Raif Badawi.

According to PEN’s information, on 9 January 2015 imprisoned blogger Raif Badawi received the first round of 50 lashes in a public flogging after Friday prayers. Badawi is now due to receive 50 lashes each Friday until he has received 1,000 lashes, although subsequent floggings have not gone ahead.

I join PEN in calling for his sentence of flogging to be overturned immediately, as well as for Badawi’s conviction to be quashed and for him to be released unconditionally. I also call for the immediate release of lawyer Waleed Abulkhair.

I would welcome your comments on my appeal.

One response to “17 June: Day of action for Raif Badawi”