NEWS
Padraig Reidy: James Rhodes and the visceral need to be heard 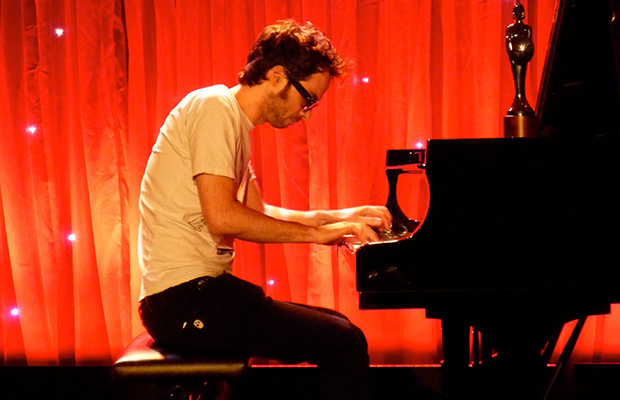 James Rhodes, classical pianist, performed at the 2009 Classical Brits Nominations Launch at the Mayfair Hotel in London, UK (Photo by Ghmp – Own work. Licensed under CC BY-SA 3.0 via Wikimedia Commons)

In an address to the first conference convened by the International Writers Center, held in St Louis in 1996, American poet Carolyn Forché described the ordeal of Hungarian poet Miklós Radnóti, who was forced into slave labour during World War II.

Radnoti managed to secure a small notebook in which he recorded his experiences in 10 poems written before he was executed.

A coroner’s report written when his body was exhumed after the war recorded:

“A visiting card with the name Dr. Miklós Radnóti printed on it. An ID card stating the mother’s name as Ilona Grosz. Father’s name illegible. Born in Budapest, May 5, 1909. Cause of death: shot in the nape. In the back pocket of the trousers a small notebook was found soaked in the fluids of the body and blackened by wet earth. This was cleaned and dried in the sun.”

Forché noted that the story of Radnoti did not end in a mass grave. Rather, his work, like that of others survived as “evidence of the dark times in which they lived”. This is what Forché calls “the poetry of witness”, work forged in instances and circumstances when the “personal” and “political” cannot be kept separate.

I was reminded of Forché and her concept of witness when I read the reactions to the court decision that would finally allow pianist James Rhodes to publish his memoir, Instrumental.

Rhodes’s candid book detailed his sexual abuse at the hands of a teacher. He had been raped, leaving him with spinal damage. An extract from the book published on the Guardian website describes the horror and the aftermath:

“I went, literally overnight, from a dancing, spinning, gigglingly alive kid who was enjoying the safety and adventure of a new school, to a walled-off, cement-shoed, lights-out automaton. It was immediate and shocking, like happily walking down a sunny path and suddenly having a trapdoor open and dump you into a freezing cold lake.

“You want to know how to rip the child out of a child? Fuck him. Fuck him repeatedly. Hit him. Hold him down and shove things inside him. Tell him things about himself that can only be true in the youngest of minds before logic and reason are fully formed and they will take hold of him and become an integral, unquestioned part of his being.”

The book fell victim to an injunction preventing publication after Rhodes’s ex-wife insisted that the account of his father’s abuse would be emotionally damaging to their son.

In overturning the injunction, presiding judge Lord Toulson noted: “There is every justification for the publication. A person who has suffered in the way the appellant has suffered, and has struggled to cope with the consequences of his suffering in the way that he has struggled, has the right to tell the world about it. And there is the corresponding public interest in others being able to listen to his life story in all its searing detail.”

The reaction to the news was overwhelmingly one of relief: both for the author but seemingly others too. Stephen Fry tweeted that he was “stupidly teary” about the judgment, which he saw as a vindication for Rhodes.

Vindication seems an odd concept to summon, as no-one seemed to be questioning the veracity of Rhodes’s story. But I think I understand what Fry means.

Rhodes’s case goes beyond the usual reasons we give for reporting child abuse: that it may help others to come forward, or that it may help snare past and future perpretators. While these are valid reasons, they are not the thing in itself. As the judge pointed out, Rhodes has a right to tell his own story and the denial of that right is a further abuse of a man who has already suffered. To deny the story is to inflict further harm.

In the Ten Stages of Genocide, developed by Gregrory Stanton of Genocide Watch (and explored in a new play, No Feedback, opening this week in London), denial is listed not as the aftermath of genocide, but as an intrinsic part of it.

“Denial is the final stage that lasts throughout and always follows a genocide. It is among the surest indicators of further genocidal massacres. The perpetrators of genocide dig up the mass graves, burn the bodies, try to cover up the evidence and intimidate the witnesses. They deny that they committed any crimes, and often blame what happened on the victims. They block investigations of the crimes…”

Thus insult goes hand in hand with injury. This is far beyond the idea of free speech, of the ability to bear witness, as a utilitarian idea: the right to speak is essential, like the right to eat. Denied communication of our experience, we, creatures who rely on social interaction, are starved (Forché describes “the social”, the place where one bears witness, as “a place of resistance and struggle, where books are published, poems read, and protest disseminated. It is the sphere in which claims against the political order are made in the name of justice.”)

The effect of denial imposed on individuals and societies can be seen everywhere from Rhodes continued anguish to Armenia’s entry in this year’s Eurovision Song Contest, it’s title Don’t Deny a pointed reminder on the centenary of that nation’s still-disputed trauma.

Sometimes, in free expression arguments, people will argue not that there is a right to speak, but no right to be listened to: this may be true, but there is a visceral need to be heard, to have our stories acknowledged. For it is our stories that make us. In that sense, the publication of James Rhodes’s memoir, after the attempts to deny him his chance to tell his tale, marks his vindication not as a pianist or a writer, but as a human being.

This column was posted on 21 May 2015 at indexoncensorship.org

2 responses to “Padraig Reidy: James Rhodes and the visceral need to be heard”