Is there hope for resolution any time soon? I fear not. 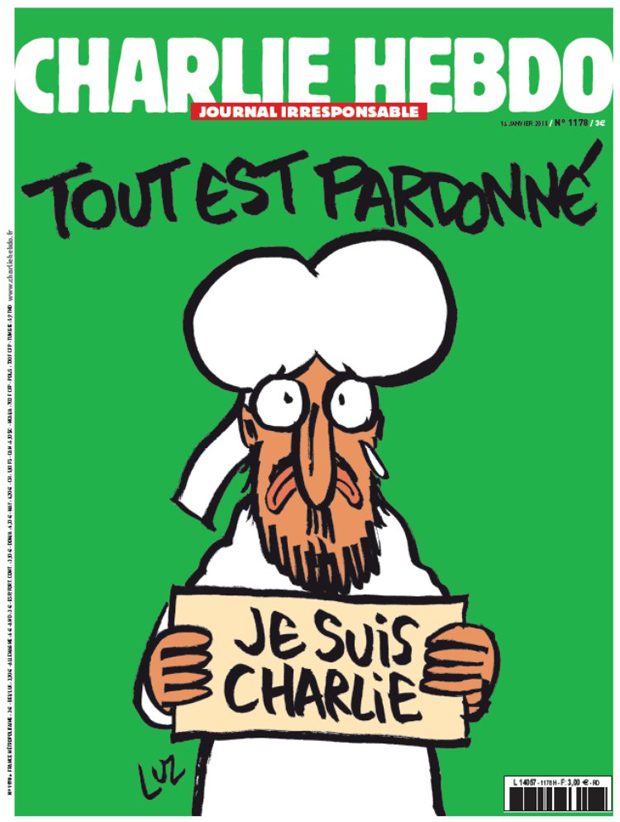 Tout est pardonne or All is forgiven, the first post attack cover of Charlie Hebdo

It’s now almost ten years since Danish newspaper Jyllands-Posten published a set of cartoons, some of which (though by no means all) depicted the Islamic prophet Mohammed. Some were flattering, some were not. One mocked jihadist suicide bombers. Another showed a schoolboy called Mohammed calling Jyllands-Posten’s editors bigots.

The idea came after it was reported that a Swedish children’s author could not find someone to illustrate her book on the life of Mohammed. Flemming Rose of Jyllands-Posten decided to commission cartoonists to draw the apparently taboo figure.

As an exercise in taboo-busting, it was bound to be controversial. But controversial though some were (one showed the prophet as a scimitar wielding menace, another a figure with a bomb for a turban) they were not shocking enough for the Danish-based radicals who decided to make a campaign of the issue. In an astonishing act of chutzpah (there really is no other word), Ahmad Abu Laban decided to fill out a “dossier” on the cartoons with even more offensive characterisations, some of which had nothing to do with Mohammed at all. He and his colleague Ahmed Akkari took the dossier to the Middle East, apparently to prove the level of anti-Muslim hatred in Denmark. Chaos ensued. The rest, the usual line would go, is history. But that wouldn’t be true: the “rest” is very much the present, and perhaps pressing now more than at any time in the past 10 years.

One wonders if Ahmad Abu Laban quite knew what he was getting us all in to. Certainly, the man, who died in 2007, was of what is now a familiar figure in western Europe. The self-publicising Muslim spokesman: the go-to guy for a controversial quote for a press not quite sure of the heat of the flames with which they were playing. Omar Bakri Muhammad, for example, was first introduced to the British public as a ridiculous fantasist in Jon Ronson’s documentary The Tottenham Ayatollah. His proteges in al-Muhajiroun provided a steady flow of enjoyably ridiculous bogeymen such as Anjem Choudary and Abu Izzadeen, who in 2006 was given the main interview on BBC Radio 4’s Today programme. Subsequent news bulletins carried his warnings of “Muslim anger” as if he were some sort of pope, rather than a fringe figure with highly dubious links.

Everyone enjoyed these outrageous figures for a while, until we realised the damage they could do. Practically every home-grown jihadist in Britain has had dealings with al-Muhajiroun. The late Laban may have known of the chaos he was about to unleash on the Middle East in 2006 with his dossier, and indeed the world ever since. He may not. His former comrade Akkari repented in 2013, saying: “I want to be clear today about the trip: It was totally wrong. At that time, I was so fascinated with this logical force in the Islamic mindset that I could not see the greater picture. I was convinced it was a fight for my faith, Islam.”

Since 2005 we have been embroiled in an absurd abysmal dream. Some people draw cartoons of a long-dead religious figure. Some other people decide this has offended some sacred, though undefined, law, and so they decide that the people who drew the cartoons must be killed. Repeat. What chronic stupidity.

But of course there’s more going on here. There is more than one reason to draw or publish Mohammed drawings: from plainly making a free speech point (as many publications did after the Charlie Hebdo murders), to anti-clericalism (a la Charlie itself), to deliberate antagonism towards Muslims (a la Pamela Geller). Not all Motoons are the same.

Nor are all responses on the same spectrum. There is a world of difference between the average Muslim who may be annoyed by a portrayal of Mohammed and a jihadist who takes it upon himself to find people who have drawn these portrayals and kill them or attempt to kill them.

This is the error that has plagued the debate for the past 10 years, and came to light again in the past few weeks with PEN’s awarding of a prize to Charlie Hebdo, and the attack on a Pamela Geller-organised rally in Texas which featured a “draw Mohammed” competition.

There has been an unwitting acceptance of several dangerous ideas, chief amongst them that in order to have respect for someone as a human being, one must respect all their beliefs, and observe their taboos. But as novelist and long-time PEN activist Hari Kunzru put it: “It is not solidarity with the oppressed to offer ‘respect’ to an idea just because it’s held by some oppressed people.”

On the reverse of this, some Muslims feel that free speech is now something that is being used to batter them over the head, rather than protect them. This in itself is a failure of civil society: the moment we decide everyone with a certain background and set of beliefs can be put in the “Muslim” box is the moment we ensure that those who shout loudest about those beliefs — the “extremists” — are given status. Ahmad Abu Laban, for example, claimed that his Islamic Society of Denmark represented all Danish Muslims.

So now what? As we’re approaching 10 long years of this argument, is there hope for resolution any time soon? I fear not. There can be no accommodation between those who believe in the right to free expression and those who believe “blasphemy” should carry the death sentence.

In between, if it does prove impossible not to take sides, we can at least make sure our arguments are clear and our ears are listening.

This article was posted on 7 May 2015 at indexoncensorship.org

One response to “Padraig Reidy: Ten years after the Danish Mohammed cartoons, we’re still having the same argument”