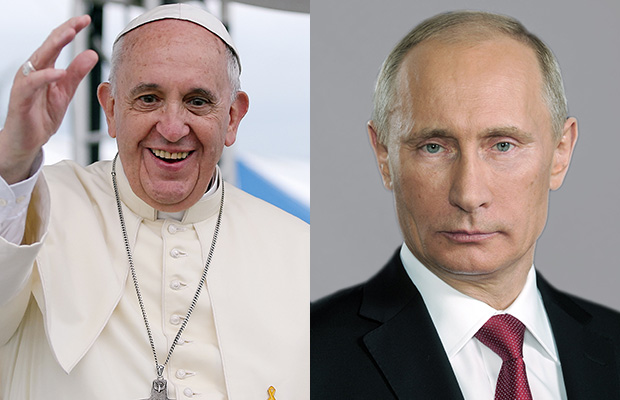 Francis: Welcome to the Vatican, Vladimir. I hope you are not put off by my incredibly humble surroundings, here in my own humble city state. I am very humble, you know.

Vladimir: Yes, so your aides reminded me, several times. It is very important for men as important as ourselves to stay humble, I believe. We would not want to, as they say, “lose the run of ourselves”. Tell me, dear humble priest: I hear you are a communist now?

Vlad: Right, yes, I think I get it. So, the whole “praying for the conversion of Russia” thing: that’s not a thing any more?

Frank: Yeah, that’s the one. Lacking humility. But Russia. In Russia, the church is still number one. Admittedly, the wrong church, but, well, who am I to be picky?

Vlad: Good to know. So, where did the communist thing come from?

Frank: Ah, the Americans. You know how they are.

Vlad: I see. So you have been defamed by the Yanqui too? I have had my trouble with them. They even claimed I invaded Ukraine. HAHAHA!

Frank (nervously, humbly): HAHAHAHAHAH (hmm). Daft, of course. I mean, you didn’t, did you?

Vlad: Of course not! Why would I do that?

Frank: Well, they might have insulted your mother. In which case you’d have every right, as I outlined in my pamphlet: “Ego In Gutture Ferrum, Punk”

Frank: It’s totally theologically sound. As Jesus himself said: “I tell you, do not resist an evil person. If anyone slaps you on the right cheek, punch them in the throat.”

Vlad (under breath): Catholics are weird

Frank: You talking about my mother?

Frank: I humbly accept the title

Vlad: Holy Father, it is true, as you said, that if someone insults someone’s mother, they should expect a punch?

Fran: It’s not just me saying that. Jesus says it!

Vlad: Anyway, what does one do when someone, say, doesn’t insult your mother, but insults you, and you can’t punch them in the throat because they’re women and apparently you’re not supposed to do that anymore?

Vlad: That, group: those awful people whose name I can’t really say in front of a priest.

Vlad: Well, I was thinking “the feminists”, but yes, them. Was it OK to send them to the Gulag?

Frank: I’m not really sure I’m in a position to comment here. The organisation of which I humbly find myself head doesn’t have…we don’t have a great track record on the whole locking-up-unruly-girls thing.

Frank: Pretty much. How about you? Your lot were pretty keen on the whole packing-em-off thing.

Vlad: Ha, yes. I’ll square with you, Frank. Can I call you Frank?

Vlad: Ah. Ok. Awks. Er, I’ll square with you, Holy Father: the gulag thing’s a hard habit to break. You know, you’ve got the rigged courts, the fantasy charges… but most of all, I mean…it’s heritage, isn’t it? Tradition.

Frank: Yes, we all do. But, y’know, not here. Vatican and all that. Don’t have a great record on those people either.

Frank: Well, I was going to say the…but yes, the musical theatre people.

Vlad: We too have our trouble with the musical theatre people. Must they be so theatrical? In front of the children? I mean, what if everyone was theatrical? What then? Everyone would be putting the show on right here and no one would be making babies.

Vlad: I mean, it’s not like I’m obsessed or anything. I’m not that bothered by them, honest. Hell, I’ve even been to a few musicals.

Frank: Let he among us who hasn’t been touched by musical theatre throw the first punch.

Frank: Ha! I see even you are a bit put out by the constant talk of punching. But I was a bouncer in Buenos Aires. And you know what we say in Argentina? “You can’t spell ‘Bad Boy’ without BA!” Ha!

Vlad: Good one. Back in Leningrad we used to say “You can’t spell ‘Please! Stop! I’ll confess to anything!’ without ‘KGB’”

Vlad: Anyway, where was I? Yes, the musical theatre people. I mean, all very well in it’s place…

Vlad: EXACTLY. But why bring it to Russia?

Frank: Exactly. Sometimes its like they think they should have their own stage in their own building in every parish in the world where they can get all dressed up and put on their strange little performances, and we’re all supposed to worship them for it. Such arrogance, a humble man such as I cannot countenance.

Frank: I’m glad we can agree on so much. Tell me, you seem like a good, God-fearing, throat-punching man…

Vlad: Why thank you

Frank: Why is it you get such bad press?

Vlad: Well, I’ve got a plan to deal with that.

Frank: Really? Me too. I noticed the guy before me came across as a bit austere, so I decided to say all the same things he said, but in a much more liberal-sounding way. The media loves it. So, what’s your plan for dealing with journalists?

Frank: Oh! Ah well, suffer little children to come unto me, as the Lord said.

Vlad: I’m pretty sure that doesn’t mean what you think it means.

Frank: Vlad, you’re a pal, but who’s the one with a direct line to God here?

This column was posted on 12 June 2015 at indexoncensorship.org