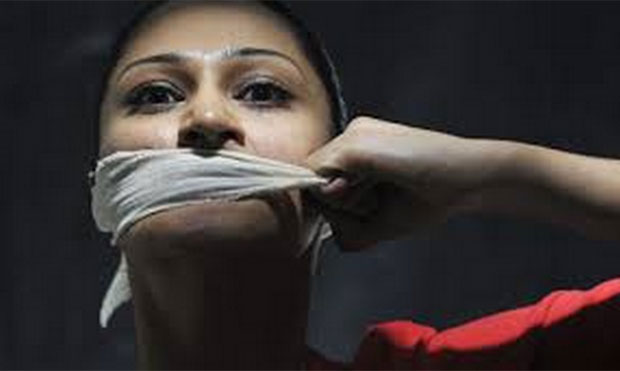 From Behud – Beyond Belief by Gurpreet Kaur Bhatti

In the early stages of Index on Censorship’s programme looking into art, law and offence, we wrote a case study about Coventry’s Belgrade Theatre, which premiered the production of Behud – Beyond Belief, 2010. The play is Gurpreet Kaur Bhatti’s artistic response to the experience of Behzti – Shameless, her previous play, being cancelled by Birmingham Rep in the face of protests.

Superintendent Ron Winch of Coventry Police was the officer in charge of policing the Behud premiere. Julia Farrington, associate arts producer, Index on Censorship, talked to Winch about working with the community and the theatre to ensure that Behud went ahead without incident. Winch provided interesting insights into how the police view the right to artistic freedom, particularly in comparison to the right to freely express political views.

Winch: The role of the police is to maintain law and order, to prevent crime and disorder. But the police have a wider democratic responsibility both to facilitate freedom of expression and at the same time to understand that it may cause offence to others. The community is looking to the police to prevent the play from going ahead because they believe it’s offensive. It could be blasphemous. And the theatre is saying to the police that the playwright has a right to express her views. The fact that Behud wasn’t as controversial a play as Behzti was probably due to the work that we did going into the community and reassuring people. It was successful from our perspective; there were no public safety concerns and the play went ahead.

Farrington: So you were weighing up the right of freedom of expression against other potentially conflicting calls on your time and your resources?

Winch: For me it was about understanding what policing is in a liberal democracy. We police by consent. That is not about police preventing freedom of expression, as long as it is lawful. If I didn’t believe in freedom of speech I wouldn’t be in this profession. And yet I am acutely aware of how sensitive some sections of the community are, especially when they see their faith being questioned, highlighted and in their view, blasphemed.

Farrington: Do you think that freedom of expression in this country is endangered if it requires this degree of negotiation and investment of time and resources on everybody’s part?

Winch: My professional view and my personal view are different. My personal view is that individuals have the power to press the off button. There are all sorts of things, especially in the media, with 24-hour news and the internet, that people would prefer not to see and it is hard for the state to control. And you have to ask whether censorship is something that the state should be concerned with. The state is always trying to legislate against things that it sees as harmful, either to the political establishment or the economic or social well-being of the community at large. But with diverse communities, all of whom have different views of what is acceptable, it is going to be very difficult for the state to create laws that they then expect the police to enforce.

Farrington: You could say that it is not the role of the state to legislate for people’s sensibilities – the idea that people believe that they have a right not to be offended. In a way that is what you were balancing in the case of Behud.

Winch: It might be surprising to you coming from Index on Censorship – you wouldn’t expect a police officer to be making these kind of decisions around a play.

Farrington: I would have expected them to be taken by someone in the council. But when I spoke to Clive Towndend of (Coventry City Council) Events Committee he emphasized that this was a policing issue.

Winch: As I said earlier, my decision was very clear. I faced a situation where if I didn’t do the consultation I might have had to react in an emergency – which is so much harder and more challenging than when you have had time to prepare.

Farrington: So you had police officers at the back of the theatre?

Winch: We had sufficient number of police officers on duty to manage the risk as we perceived it. But those officers were in a very low profile kind of mode.

Farrington: In the last few days before the production opened there was a communication between your colleagues in Birmingham and yourselves suggesting the threat of violence.

Winch: The threat was always there. If a group of people wanted to disrupt an event, especially a controversial event, then if they have the support they could probably do that, whether or not it was justified.

Farrington: I’d like to talk about the question of fees to cover the cost of guaranteeing the safety of the theatre. As I understand it, the bill was £10,000 a night for the cost of policing.

Winch: It wasn’t that much. In fact the theatre was not charged for the policing.

Farrington: But initially you assessed that it would cost £10,000 a night in policing and you wanted to pass that cost onto the theatre. The theatre argued that, as a not-for-profit rather than a commercial organisation, such a charge would make it impossible for the play to go ahead [and an act of de-facto censorship on financial grounds]. The fee was reduced to £5,000 and eventually as I understand it, the fee was waived altogether.

Winch: My police constable in charge of planning our operations works in other areas – for example football matches – took the view that if we were being asked to police a private event there might be costs. I think that is legitimate. Some of the community might say whilst I have got police officers enabling, or being seen to enable, a controversial play, that means that officers are not dealing with other matters. However, as things moved on, as the risks changed because of the dialogue and the meetings with the safety advisory group, I took the decision that we wouldn’t charge for policing. But what it categorically wasn’t about was the police being seen to incur costs on an organisation or theatre to prevent putting on a play.

Farrington: If you have a political protest that is planned for Saturday afternoon going through the centre of town, could you charge that political party for policing?

Winch: No, that would be very different. It is entirely fair that a profit-making private enterprise that needs to use public resources to enable their business interests to go ahead – for example in the case of a football match – be charged for the privilege. On the other hand, in the case of a political party that is not making any profit, then it is entirely appropriate that the resources of the state enable it. There is a distinction.

Winch: Ultimately it comes down to professional judgement, based on threat and risk around events. And the risk initially with this play was high, though the threat really did recede as we did the work.

Farrington: But it was a discretionary judgement.

Winch: But then so much of policing is.

Farrington: It could have gone the other way – Behud could have been pulled. Whereas in the case of a political party, even if the politics are horrible and you don’t agree with them, you don’t interfere. There seems to be an imbalance.

Winch: I don’t know about imbalance. But how would you define what type of event should be supported by the public purse? We have had enough difficulty trying to define when football clubs, multi-million pound enterprises, should pay for policing. If we open it out to all walks of public life it is just going to be too complicated. This is where we rely on discretionary judgement of professionals; society expects them to make those rational informed judgments, as I did in this situation.

Farrington: But you wouldn’t exercise the same discretionary judgment about a political party?

Winch: You could if the political party wanted to march; there is legislation around that because there are public safety considerations. If a political party wants to make a static protest there is very little you can do to prevent it from happening in terms of the law.

Winch: I would not welcome legislation defining when and where we should be involved in artistic expression. I don’t think that is the right area for the state to be looking at.

Farrington: But what if it is about protecting the right to artistic expression?

Winch: But it’s about the evolution of what is considered inappropriate, and that changes. I think freedom of expression is protected – it has a natural element of protection around it and a natural censorship as well.

Farrington: And that is your consensual policing. You police by consent. You have antennae and connections tuned in.

Farrington: After the G20 there was a big shift, wasn’t there, in terms of the right to protest was more thoroughly supported?

Winch: You have to look at what the law says about when and where you need to intervene. The G20 was a different set of circumstances to what we are facing locally. We live in a changing world and we have to respond to those changes.

Farrington: Nowadays we are more aware of hurt to people’s feelings and sensibilities and that’s where it becomes complicated.

Winch: It’s a very difficult area for professionals to negotiate.

Farrington: Nonetheless this play wasn’t like a football match and charging for policing would certainly have stopped the play from going ahead. The question for me is what happens when there are more constraints on resources? The decision might not go that way and the play might not go on.

Winch: I can only really speak about this specific case, because if an event like this doesn’t go well then potentially I would have to put more police officers onto the streets to maintain the security of the theatre. I think what happened with Behud was a wake up call for the theatre to recognise that actually the police are not the enemy, out to prevent freedom of speech, but very much helping to facilitate it – from a very balanced perspective. I think the wider question is: what do we want our police to do in a liberal democracy? I think policing needs to reflect the changing norms in society. Things that wouldn’t have been acceptable 20 years ago, especially around questions of morality, are now acceptable.