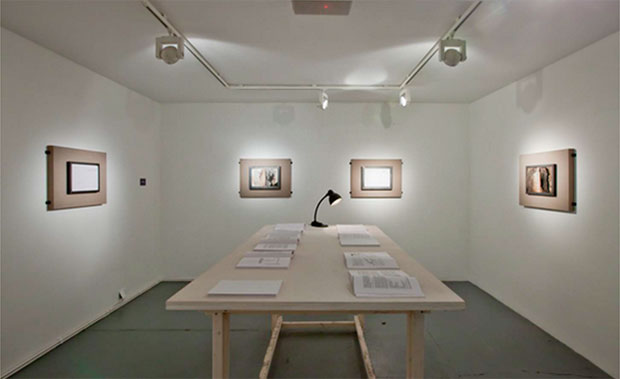 Installation image from Xenofon Kavvadias: The law is no less conceptual than fine art at 10 Vyner Street. With permission of the artist.

Description of the work

The books were uniformly hard-bound without titles, accompanied by text describing the content and context in which it was published. Background information, correspondence and records of interviews were displayed in the gallery.

The gallery was well lit and the viewer was encouraged to take time to read the books and accompanying information. Each week of the six-week exhibition, one book that could not exist outside the specific conditions that were created in the gallery was burned and the ashes were displayed in specially made glass vases. By the end of the exhibition, all such books were burned.

In the installation Kavvadias explicitly stated that the documents neither expressed his views nor had his endorsement.

Kavvadias started the project in 2005 believing that the new anti-terrorist legislation was highly problematic and represented an erosion of civil liberties – a hypothesis that he wanted to test as an artist, from the standpoint of an individual, independent investigator who has unique access through exhibition to the public, the media, the law and the policy maker.

I am not a lawyer, in fact when I started out I wasn’t sure what I was. The choices seemed to be: journalist, activist, artist. I chose the latter.”

As the Report of the Eminent Jurists’ Panel on Terrorism, Counter-Terrorism and Human Rights 2009 noted:

Many participants at the U.K. hearing raised concerns that the breadth and the ambiguity, of the offence of ‘glorification’ create a risk of arbitrary and discriminatory application. The risk of such abuse is exacerbated by the fact that the offence applies also to past acts of terrorism and to terrorist acts occurring in other countries. Witnesses expressed concern that such wide-ranging laws reduce legitimate political debate, particularly within immigrant or minority communities.”

Aware of the grey areas the legislation created, Kavvadias’ show was an attempt to plot the margins of legality with regard to counter terrorism legislation – what can be seen, said or thought.

Kavvadias identified the steps he needed to take to be able to demonstrate, in court if necessary, that his motivation was as an artist. The artwork was both his presentation of texts and objects in a carefully curated space, and the evidence for his defence.

Here is a brief summary of his interactions with the police, lawyers and a member of the House of Lords, who helped him to answer the underlying questions his project raised.

Having first secured support for this project from Leeds Metropolitan University where he was studying at the time, Kavvadias approached the police and had an hour-long interview with the Counter Terrorism Special Branch in Leeds. He made a record of the interview during which he went through a list of the materials he thought he could not present. He asked the police to respond to these materials during the interview. He was asking for advice, not permission.

The police tried to advise Kavvadias on what — in their view, following available guidance — he could and couldn’t collect and discussed examples of material that had been used by the police to secure convictions.

The police always had a feeling of a line – ‘if you cross the line it will be illegal and we will have to arrest you’. This is a preventative measure from the police – they want to present a line, they don’t want to give you the grey area, so that you stay safely within the legal side. Even if later the court might say – ‘no there is no case’. The police have an interpretation of the law and this understanding is later modified by a court.”

Kavvadias wrote to the Press & Broadcasting Advisory Committee (DPBAC) at the Ministry of Defence (MoD) asking if he could display restricted MoD documents that he found on Wikileaks. He received the following reply:

“I have no objections from Defense Advisory Notice standpoint to your displaying the first and second pages of the subject document as part of your project.”

With this letter to support him, Kavvadias displayed the first and second page of a document, leaked by Wikileaks, that gives an idea of the level of surveillance capabilities of the UK.

The first legal opinion Kavvadias sought was from Liberty and he got a very detailed letter back, explaining how the legislation can be applied, where he needed to be extremely careful and how he should position himself. “It was very illuminating and very useful and it was one point of view,” Kavvadias said.

Kavvadias then approached Gareth Pearce, a British solicitor and human rights activist, who connected him with Alastair Lyon one of her team, and subsequently talked to Matrix Chambers’ Matthew Ryder QC in detail about his project. All the lawyers he approached supported the project and thought it was an important piece of work. While they disagreed about what was the greatest specific risk, the lawyers agreed that extreme care should be taken on how the whole show would be staged.

All agreed that at the entrance of the gallery there should be a very clear public disclaimer that the artist and gallery do not advocate violence and to distance themselves from the content. It should be made absolutely clear that the exhibits were to be seen and discussed, but not recorded — no photography, no note taking — to minimise dissemination. No part of the installation should be available on the internet.

The biggest challenge was the contradictory advice – ultimately you have to make up your mind – Liberty, MR, Lord Carlile – all liked the project. No-one took an absolute position so it was my decision. I felt I had the information – the facts were in front of me and I had to make up my mind to stick with it.”

Encouraged by the support from the lawyers, Kavvadias went on to one of the highest authorities in the land – Lord Carlile of Beriew, Independent reviewer of terrorism legislation UK 2011– a Law Lord. He wrote to Carlile and received the following reply:

Thank you for your letter of February 25th.

I was interested by your MA project and am sure that there is a visual art context into which counter-terrorism legislation can be put.

Artists sometimes take risks with the Law to achieve full expression, however the Law will not be suspended for such projects. When people take a close interest in terrorism websites, or sites containing material that might prove of interest to terrorists, the authorities would be negligent if they did not take an interest in such activities, if aware of them. I am sure that you are exactly as you describe, an artist acting in good faith, but the police and others will not necessarily take that at face value and understandably so.

The authorities are under no obligation to advise whether proposals made by a citizen will lead to prosecution, and there is case law to say they need not do so. Indeed the giving of such advice would be a departure from normal practice by both the police and the Crown Prosecution Service. In the event of prosecution being considered the CPS would certainly take into account Zafar1 in assessing whether there was enough evidence or whether or prosecution was in the public interest.

The best and short answer to your question is that you are unlikely to be prosecuted and if prosecuted, not convicted, if you do not break sections 57 or 58 of the Terrorism Act 2000. The responsibility for what you do is yours: I am sure you are conscious of this, and in following your studies, document what you do and why by notes.

I am sure that your course supervisors will advise you on boundaries with the advantage of knowing your work. Central St Martins is an excellent and celebrated art school and the staff there possess well-honed judgement about the boundaries between conceptual art and politics and the Law.

I am sorry that I cannot answer your question more directly, but I am afraid that the Law is no less conceptual than fine art.

1. R v Zafar & others [2007] Imran Khan and Partners represented Aitzaz Zafar when in 2007 he, together with Irfan Raja, Awaab Iqbal, Usman Malik and Akbar Butt were jailed for between two and three years each by the Old Bailey for downloading and sharing extremist terrorism-related material, in what was one of the first cases of its kind. The prosecution alleged that they had collected extremist material for the purposes of terrorism. The men argued that they had no real terrorism links and were driven by intellectual curiosity. Four of the men were students at the University of Bradford. Following their convictions, the men appealed and on the 13/02/2008 the Court of Appeal overturned their convictions. In their ruling, the three Appeal Court judges said the trial jury should have been told to decide whether there was a connection between the extremist literature and a clear terrorist plan. http://www.ikandp.co.uk/ViewCaseStudy.asp?CaseID=76

Having managed to engage a high level politician and lawyer, Kavvadias felt that it would be extremely hard for the police to characterise him as someone who was acting recklessly.

10 Vyner Street gallery owner Peter Gallagher-Witham was interested in freedom of speech and felt it was worth investing in and thought it was a good work of art. He also felt that it was controversial and would attract attention. Despite the gallery owner’s belief in the work, he had a lot of reservations; he was worried that the police would come to the gallery and he would be accused of dissemination of terrorism.

He really wanted some sort of reassurance, but there is not an absolute reassurance. There are steps that can minimize risk. I never expected a public gallery to take this work because of the nature of the work being too contentious.

This was the last exhibition in 10 Vyner Street, which closed at the end of Kavvadias’s show.

Like most artists, Kavvadias wanted publicity for his work, but in this case, it was not just the exposure for the work that he was looking for. The press was interested because Lord Carlile, a senior law lord, had responded to an artist; this was newsworthy. The Guardian wrote an article which took the project into the public domain, opening it to scrutiny by an infinitely wider group, including the police. During the exhibition, Sir Allan George Moses, a former Court of Appeal judge, visited the gallery and left a positive comment. The police did not openly visit the gallery.

There were no legal repercussions for Kavvadias as a result of the exhibition.