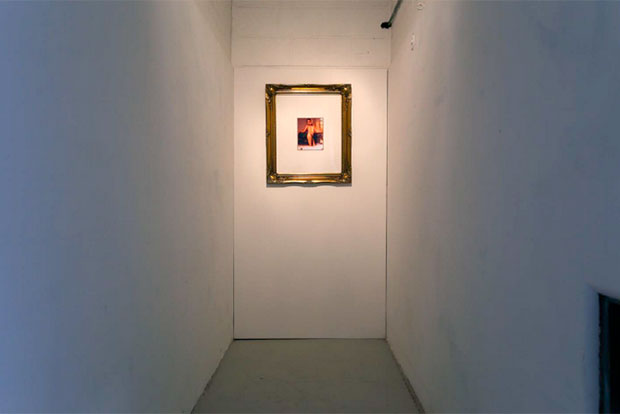 As part of Index on Censorship’s programme looking into art, law and offence in the UK, this case study looks at Xenofon Kavvadias’s mission to exhibit Spiritual America by Richard Prince in public, effectively reversing the censorship of the image by Tate Modern who removed it from the gallery and the catalogue of their exhibition Pop Life, Art in a Material World 2009-10. Kavvadias called his exhibit Spiritual America 2014 and it formed part of his MA degree show at Goldsmiths College.

The work illustrates many of the issues raised in Index’s Art and the Law pack on Child Protection, giving useful insights into what happens when a work is contested in this area of legislation, the negotiations with the police and how far the law is open to interpretation.

Introduction
Spiritual America by Richard Prince was exhibited as part of The Tate Modern exhibition Pop Life Art: in a Material World, October 1 2009–January 17 2010. The piece is a reproduction of an original 1976 photograph depicting Brooke Shields, aged 10, naked in a bath. The Tate took the work down apparently on the advice by the Obscene Publications Unit of the Metropolitan Police Service that the image might be in breach of the Child Protection Act 1978. Under pressure from the police, the image of the work was also redacted from the catalogue of the show.

A 14 October 2009 BBC report carried a statement from the gallery that said: “In consultation with the artist, Richard Prince, Tate has replaced Spiritual America 1983 with a later version of the work made by him in collaboration with Brooke Shields, Spiritual America IV 2005. Tate is in ongoing discussions with legal advisors about the catalogue.”

Charlotte Higgins and Vikram Dodd writing in The Guardian on 30 September 2009 reported:

The decision by officers to visit Tate Modern is understood to have been made after police chiefs saw coverage of the exhibition in today’s newspapers, rather than as a result of complaints.

Officers met gallery bosses and are also understood to have consulted the Crown Prosecution Service as to whether the image broke obscenity laws.
A Scotland Yard source said the actions of its officers were ‘common sense’ and were taken to pre-empt any breach of the law. The source said the image of Shields was of potential concern because it was of a 10-year-old, and could be viewed as sexually provocative.”

The Tate chose not to include the original picture in Pop Life: Art In A Material World, after seeking legal advice.

Research leading to the presentation of Spiritual America 2014

Kavvadias undertook to display Richard Prince’s Spiritual America in his MA show at Goldsmiths, which he called Spiritual America 2014. As well as displaying a framed replica of the artwork, a record of all his research was available to the viewer to place the image in context. Gaining as full an understanding as possible of the legal and policing positions regarding the removal of the image from the Tate in 2009 was his point of departure.

Kavvadias issued FoI requests to the Tate, the Police and the CPS. All FoI correspondence was included in the exhibition.

1 October 2009: The police wrote an email to the Tate regarding their visit: 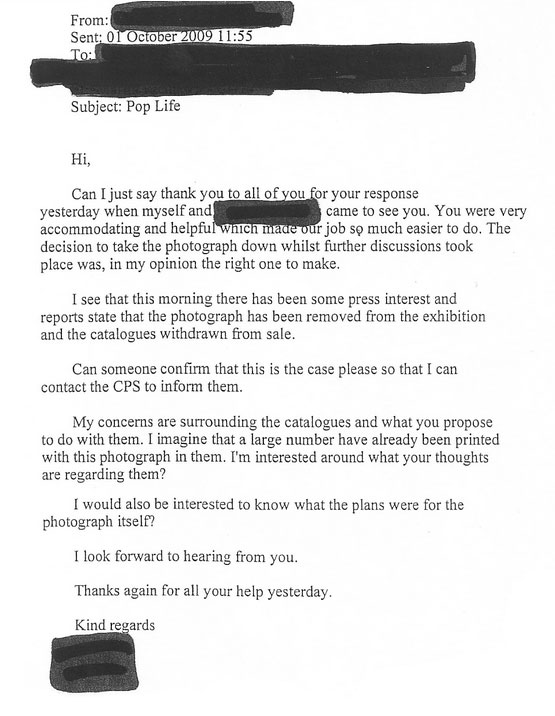 2 October 2009: The police continued to put pressure on the Tate about their plans for the catalogue, writing a follow up email to the one above the next day.

6 October 2009: The Head of Director’s Office, Tate wrote to the trustees:

[Formalities]…we felt that given the important issues at stake (acting within the law while defending artistic freedom of expression) and the level of public interest in the case that we should keep each of you as individual trustees informed.

At the request of the owner and as provided for under our loan agreement with him, we have returned the work to him. In light of this, we have also consulted with the artist and are considering the option of substituting the work with another worked titled Spiritual America IV.

The Tate Enterprises Ltd board will meet…to discuss their position and options with regard to the distribution of the catalogue. Legal advice has been sought to inform their decision from leading counsel and specialist solicitors. …In the meantime the catalogue will continue to be withdrawn”

The Metropolitan Police Obscene Publications Unit wrote regarding their position as requested by the Tate: 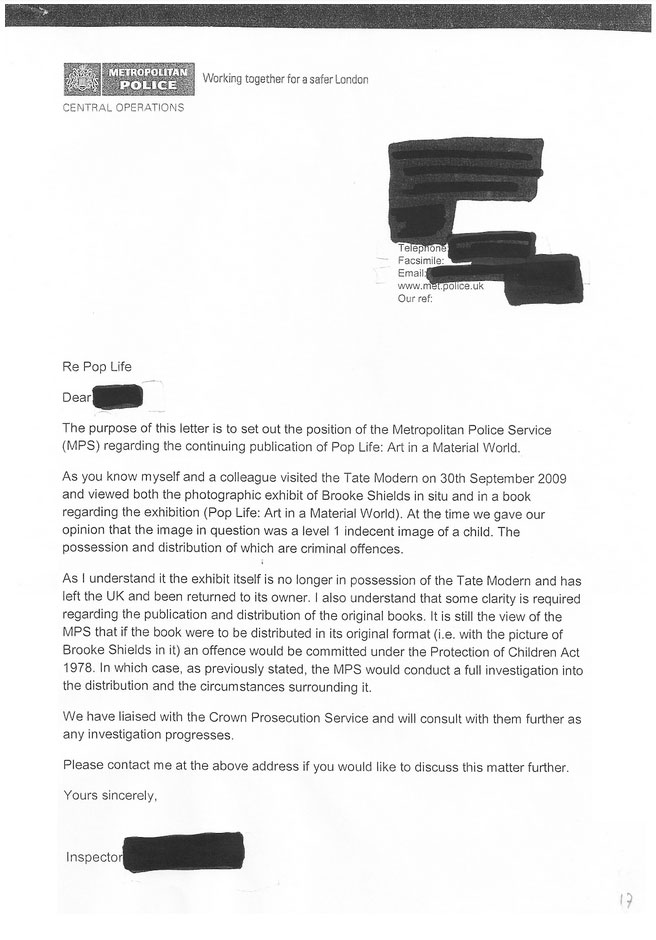 Availability of the image
Kavvadias carried out his own research into the availability of the image in books mentioned in Serota’s list, one of which was written by a professor at Goldsmiths. He researched the libraries of four leading art colleges in London and the British Library, where he easily located the books. He sent an FoI request to the British Library for their position regarding the advice Metropolitan Police gave to Tate. The British Library replied after two months, with a full and considered response robustly defending the books.

Ethics approval from Goldsmiths
The fact that one of the books containing the image was written by a Goldsmiths’ professor reinforced the view held by all of the committee that the Richard Prince picture is an accepted artwork. However, given that this defence failed to convince the legal team working with the Tate, it was not enough itself. They wanted reassurance on three additional concerns:

Kavvadias addressed the issue of harm by presenting the history of the image:

“In 1987, after I joined up with Barbara Gladstone, I editioned it. Ten copies and two APs [artist’s proofs]. I had my lab print it on ektacolor paper at 20 x 24”. The first one I sold, was to Stephan, my plumber friend and drummer for the Glenn Branca band. I sold it to him for a hundred dollars and some plumbing work. A couple of years later, I heard he sold that copy to Jay Gorney for four grand. Ten years after that Myer Viceman sold the original 8 x 10” back to Barbara Gladstone for two hundred thousand dollars. Then the 8 x 10” sold to Per Skarsted and later he made a special room for it, (all alone… painted the walls red) and showed it at Art Basel and sold it to Michael Ringier for one million dollars. A couple of years ago Michael lent it to the Tate Modern for some POP show organized by Alison Gingeras and Jack Bankowsky and it was ‘confiscated’ by the London police. The Tate didn’t do much protesting… they caved in to the ‘authorities’ and let them cart it away. It was never re-hung at the Tate and it was eventually returned to Michael Ringier. (Last I heard, Michael lives with Spiritual America in his home outside of Zurich).” Source: ASX

As for possible copyright infringement, because Kavvadias was making a replica of the entire work, including placing it in a frame similar to the one used by Richard Prince, he had to demonstrate clearly to the university that he had the relevant permissions. Given that Richard Prince based his career on copying images and putting them into a new context, Kavvadias did not anticipate a problem. Kavvadias was using the image under Fair Use in US Copyright law for non-commercial and/or academic purpose. However, in order to reassure Goldsmiths, he took two steps:

@RichardPrince4 I can’t believe it. Trying to show Spiritual America 1983 in Goldsmiths London but they insist i have to ask for copyright

@RichardPrince4 told them I don’t really have a message or any comment on the original, just need to show it in the UK.

Kavvadias wrote to Prince’s London gallery informing them that he was attempting to legitimise the artist’s work that had been criminalised in the UK. They wished him luck.

Kavvadias interviewed lawyer Mark Stephens of Finers Stephens Innocent on 4 February 2013, regarding the legal advice given to the Tate to redact the image. Stephens made it clear he didn’t think there was any possibility that the CPS would have recommended a prosecution. Taking the CPS three stage test of whether to prosecute: the first, which asks is there sufficient evidence, is covered, because the image is the evidence. But he claimed it would have failed the other two:

Kavvadias wrote to the police informing them that he intended to display this work as part of his Masters thesis at Goldsmiths and gave them the dates. He didn’t ask them for advice or permission. He kept the email trail as evidence of his transparency. They didn’t respond.