#UnsilencingPakistan: A tribute to Sabeen Mahmud 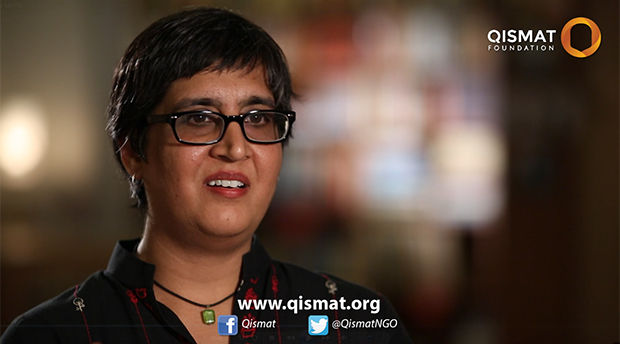 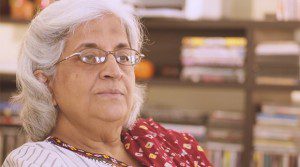 Mahenaz Mahmud spoke of her daughter Sabeen’s dedication to Pakistan. (Click for video on Vimeo)

“Tonight, please don’t forget to laugh and dream out loud, that would be the best tribute you could pay to Sabeen”, said Mahenaz Mahmud via video at Unsilencing Pakistan, an event co-hosted by Index on Censorship at London’s Conway Hall on Thursday 23 July.

Sabeen Mahmud had been a prominent ‘social activist’ and human rights advocate including founding The Second Floor, a cafe dedicated to being a safe space for community discussion. Three months on from her murder, the London event was a tribute to a woman described by so many as an inspiration, a fantastic listener and a champion of free speech and freedom of expression.

Hosted by comedian Aatif Nawaz, the evening was a celebration of Mahmud’s life and Pakistani culture. Multiple speakers, many of whom knew Mahmud well, shared their thoughts on her work and the issues she confronted as she worked to encourage greater openness in Pakistan.

The event began with the trailer from forthcoming documentary Silencing Sabeen, a look back on the life and tragic death of a woman loved by so many. All of those who were close to Mahmud showered praise upon her and told anecdotes of a woman dedicated to the cause of free expression. BBC journalist Ziad Zafar, founder of Pakistan for All and a member of the newly launched Sabeen Mahmud Foundation’s board, said: “She was at the forefront of every progressive movement that has taken precedence in Pakistan in the last decade”. Dr Ayesha Siddiqa from the University of Oxford, who had met Sabeen on a number of occasions, said: “Conversation doesn’t weaken Pakistan. Sabeen knew that to free Pakistan, you need to unsilence it.”

Dr Ayesha Siddiqa: Pakistan is becoming more silent. We should not have ghosts #UnsilencingPakistan live: http://t.co/fxuwfsjavT

Ali Dayan Hasan, a Pakistani human rights activist, knew Mahmud as a child and watched her grow into a beautiful woman. Of Karachi, her beloved birthplace, he said: “Her life, her achievement, her death is all quintessentially about the city that she came from”.

Childhood friend and Index on Censorship magazine contributor Kamila Shamsie described their blossoming friendship from the moment they met at Kindergarten. She had recently asked friends and colleagues of Sabeen to send her written praise of their late friend. One said: “Her passion was contagious,” while another said: “Sabeen would never have kept the spoils of victory, even if she had fought alone.”

The evening’s speakers also explored the state of Pakistan’s democracy and numerous attacks on free speech in recent times. Tehmina Kazi from British Muslims for Secular Democracy warned that “universal human rights have been tossed aside and been replaced by cultural relativism. The very people who need to have their eyes wide open have their eyes wide shut”.

Shaan Taseer of Pakistan For All, whose father Salmaan was murdered for his opposition to Pakistan’s blasphemy law, spoke forcefully about standing up to nationalist and religious figures like Abdul Aziz.

.@ShaanTaseer: If there’s one way to honour her memory: We must never stop providing the alternative narrative #UnsilencingPakistan

The New York Times Pakistan Bureau Chief Declan Walsh, who now operates from London after having his visa cancelled by Pakistani authorities, spoke of how, on first arriving in Pakistan in 2004, he was struck by the vibrancy and free speech of the press even though at the time it was under military rule. He called Mahmud’s murder a “very dark watershed in the decline of free speech in Pakistan in the last ten years.”

Jodie Ginsberg, CEO of Index on Censorship, said: “It takes bravery to be a dissenter at any time but it takes a special kind of courage to stick your head above the parapet in times of danger.”

Other speakers on the night included Annie Zaman from Bytes For All and Suniya Qureshi of the Qismat Foundation.

Paying tribute to Mahmud’s passion for the Art, and T2F’s ongoing role as a gallery and performance space, Pakistani singers and dancers including Kali Chandrasegaram, Hyder Cheema and Ustad Roshan Abbas Khan were also on the programme. In a fitting nod to Mahmud’s well known support for young people and future generations, three students from City and Islington Sixth Form College were also invited, bringing diversity to the bill.

Co-organisers of the event, Yasmin Whittaker-Khan and Anneqa Malik thanked the audience and Index on Censorship, encouraging action to prevent more tragedies like Mahmud’s.

This article was posted on 24 July 2015 at indexoncensorship.org