Can Denis O’Brien take a joke? Current evidence would suggest not. 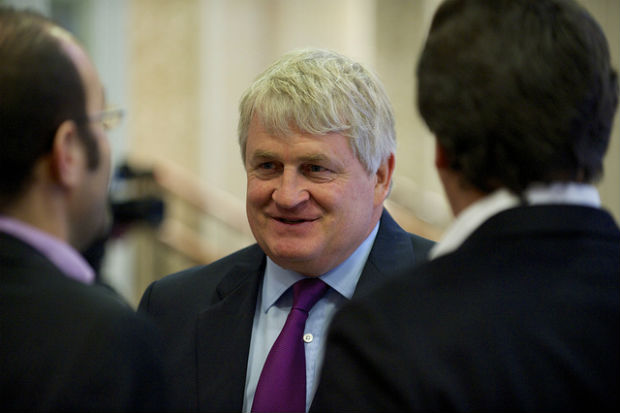 The site, known as WWN, had published a fictional story about a parallel universe in which the tycoon had been convicted of white collar crime. The editors soon received a letter stating that “references to a ‘parallel universe’ are a sham”, and that the lawyers had instructions to take “all necessary steps to vindicate their client’s good name and reputation.”

Scary stuff for a fledgling operation. Editor Colm Williamson, faced with the wrath of O’Brien, understandably took the post down.

Then, political site Broadsheet.ie reported the threat to Waterford Whispers, including a screengrab of the original article. So, they, too, got a letter from Meaghers, as did their web hosting company, hostingireland.ie.

For all that, it would be wrong to characterise this as simply a rich and powerful man going after innocent upstart startups. That would be to denigrate O’Brien unfairly. For he is equally at home pursuing the parliament and the national broadcaster as he is pursuing people who write jokes.

As previously reported by this column, O’Brien took umbrage when an independent TD, Catherine Murphy, raised allegations over his business finances in the chamber of the Dáil. O’Brien got an injunction against RTE, the state broadcaster, from reporting the comments, in spite of the fact that, as Murphy enjoyed parliamentary privilege, her comments were available on the Oireachtas (parliament) website.

The Dáil’s Committee on Procedure and Privileges subsequently found that Murphy had not abused her parliamentary privilege, and that it could not rule on the veracity of her comments.

The answer is that satire has never had the most comfortable existence in Ireland, in spite of all our Swifts and Wildes and Becketts and O’Briens.

While we may be a people noted for our sense of humour, we’re deadly serious when it comes to ourselves. O’Brien, a man richer than Oprah, or Donald Trump for that matter, portrays himself throughout these proceedings as the innocent assailed on all sides. He is a citizen making a stand for all that is good and holy in a wicked world.

He, a decent man, a patriot no less, a man who volunteered to pay the wages of the national football team, is assailed by gombeens, ingrates and begrudgers who will do everything in their power to keep a good man down. These forces may take the form of the state or a small website. It doesn’t matter. What matters is there are external forces trying to destroy us. It’s probably a post-colonial thing. We can usually blame that.

But whatever the psychology behind it, O’Brien has engaged a scattergun assault on free speech. It’s fascinating to watch, as he turns one Waterford Whispers spoof story into a near-prophecy.

“Denis O’Brien To Sue Everyone”, read one Waterford Whispers headline in May of this year. “We’re particularly targeting people who have had negative thoughts about Denis in their head but have never uttered them in a public forum,” a fake solicitor was fictitiously quoted as saying in the entirely made up story.

And now? Well we haven’t reached that stage yet, but being honest, one does think twice about writing about Denis O’Brien. And this is only vague trepidation about covering publicly known libel threats. One wonders if editors on struggling titles will really have the stomach for sending a hack out to do some serious muckraking. That is not to suggest that anything will be found — simply that you don’t know until you look. That’s how journalism works.

That O’Brien makes a large part of his money from newspapers, radio and mobile phone communications bears repeating. The free exchange of information is his business. Perhaps he should show a little more respect to the principle and the practice.

This column was posted on 14 August 2015 at indexoncensorship.org