The fund will contribute towards Index on Censorship’s Freedom of Expression Awards Fellowship, a year-long programme to support those facing censorship 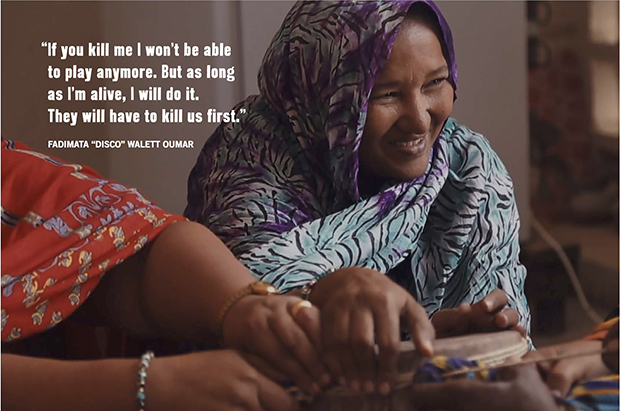 Fadimata “Disco” Walett Oumar, as featured in They Will Have To Kill Us First

Freedom of expression campaigners Index on Censorship and the producers of award-winning documentary They Will Have To Kill Us First are delighted to announce the launch of a new fund to support musicians facing censorship globally.

The Music in Exile Fund will be launched at the European premiere of They Will Have To Kill Us First: Malian Music In Exile – a feature-length documentary that follows musicians in Mali in the wake of a jihadist takeover and subsequent banning of music – at the London Film Festival on 13 October.

In its first year, the Music In Exile Fund will contribute towards Index on Censorship’s Freedom of Expression Awards Fellowship, which is a year-long structured assistance programme to support those facing censorship. The funds will be used to support at least one musician or group nominated in the arts category of the awards. This will include attendance at the awards’ fellowship week in April 2016 – an intensive week-long programme to support career development for the artists. This also brings training in advocacy, fundraising, networking and digital security – all crucial for sustaining a career in the arts when under the pressure of censorship. The fellow will also receive continued support during their fellowship year.

Songhoy Blues, who feature in They Will Have To Kill Us First, were nominated for the arts category of the Index Freedom of Expression Awards in 2015. Index’s current arts award fellow is Mouad Belghouat, a Moroccan rapper who releases music as El Haqed. His music publicises widespread poverty and rails against endemic government corruption in Morocco, where he is banned from performing publicly.

Johanna Schwartz, director of They Will Have To Kill Us First, said: “For the two years that followed the ban on music in Mali, I filmed with musicians on the ground, witnessing their struggles and learning what they needed in order to survive as artists. The idea for this fund has grown directly out of those experiences. When faced with censorship, musicians across the world need our support. We are thrilled to be partnering with our long-time collaborators Index on Censorship to launch this fund.”

Our ambition is to widen support as the fund grows to support more musicians in need.

You can donate to the Music In Exile Fund here.