The government's policy to counter domestic extremism may identify some of the pervasive problems, but its aims are wholly unclear 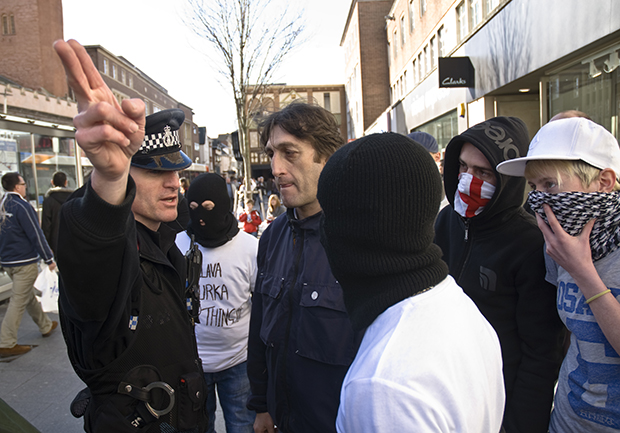 There are a few techniques you can use to spot whether someone has slightly dodgy views on the world.

My favourite is the hand-chopping test. Imagine, if you will, that you find yourself debating on a panel with a media-friendly community activist. He was very jovial in the dressing room, knows all the right words about the European Convention on Human Rights and a little bit about the emancipation of women. All the nice things. But something seems a bit shady. You’ve heard he’s associated with some rather dubious types. Try this: ask if they think thieves should have their hands cut off. If they say: “What an odd question. Of course not!”, they’re probably fairly normal people, but they won’t be your friend because they reckon you’re probably Islamophobic. But if they start waffling about the “Sharia being properly implemented… in an Islamic State the Sharia would necessarily… something something scholars…” etc, you are in all likelihood sharing a stage with someone who’s a bit, well…

Well what, exactly? Dodgy, yes. The test has served to establish that much. But does it mean they’re probably going to join the Islamic State immediately after you’ve finished your panel debate? Or encourage others to do so?

Probably not. We don’t really know.

Take another example. You’re at a bus stop late at night when you overhear a middle-aged man next to you railing against refugees to a young woman. Is he simply an anti-immigrant little-Englander? What if he starts explaining that the current refugee crisis has been caused not by Assad or IS, or oppressive governments in say, Eritrea, but by the machinations of “Rothschild Zionists” who are determined to flood Europe with dark-skinned people in order to pollute the continent’s Aryan bloodstock?

The UK government would class the beliefs outlined above as “extreme”. Indeed, in its newly-outlined counter-extremism strategy, it focuses almost exclusively on Islamism and neo-Nazism, which might come as a relief to anarchists, deep greens, animal rights activists and physical-force Irish republicans.

I’m not about to debate the merits of the term “extremism” itself. Yes, “extreme” is by its nature a relative term, and things change over time: the Prussian secret police who spied on Karl Marx in London as he wrote Das Kapital surely would have identified him as an extremist, but could not have possibly imagined his ideas would become so very prominent in the corridors of mainstream academia a century later.

The ideas of extreme Islamists and the far right, it is probably reasonable to say, are far from the mainstream of British society. And violence is carried out in their name. These seem reasonable assertions.

The question then is whether the government should do something about their existence. And if so, what?

The new counter-extremism strategy does at least attempt to identify specifics of what extremism might be and also shows some actual knowledge of the identified problems as specific political projects rather than floating notions.

But it’s still not entirely clear whether the ultimate aim is to prevent acts of terrorism carried out by extremists or to prevent general wrongs.

It is of interest, for example, to note that violence against women and girls, including genital mutilation, is identified. But I’m not sure that the “root causes” can be linked simply to the forms of extremism mentioned in the strategy document.

There are other issues that will also raise concern for those interested in free expression.

In an age when stories about who can and cannot speak on university campuses have become a staple of discussion, the government’s assertion that it expects “student bodies such as the NUS to avoid providing a platform for extremist speakers” feels like yet another incursion onto the idea that universities should be free spaces.

The suggestion that “the government will challenge broadcasters whenever extremists have been given a platform to preach harmful messages without critical challenge” appears to be moving beyond the existing role of Ofcom in promoting balance on the airwaves.

This is underlined by the pledge to “legislate in this parliament to ensure Ofcom’s existing powers to immediately suspend TV services that broadcast unacceptable extremist material also extend to all radio services” and to “consider changes” to regulation around shows that appear on the web.

We ultimately return to the challenge of our jovial preacher on the panel debate or our bus-stop Streicher.

As individuals and as a society, what do we want to do with them? Convince them that they are wrong and that liberal democracy is the way to go? The government suggests it will “act with confidence, unapologetically defending our shared values and robustly confronting extremists”.

This is important, certainly, and is something that must be put into practice in places such as prisons where the path to radicalisation and possible violence is at its clearest.

But it’s crucial that is seen as an act rather than an idea: the crime is to plant the bomb or recruit, fundraise for violence in the name of the Islamic State, or attempt to foment race war longed for by Nazis. The crime cannot be simply to believe in the Islamic State or the race war. We come back (as we so frequently do) to John Stuart Mill’s harm principle: “The only purpose for which power can be rightfully exercised over any member of a civilized community, against his will, is to prevent harm to others.”