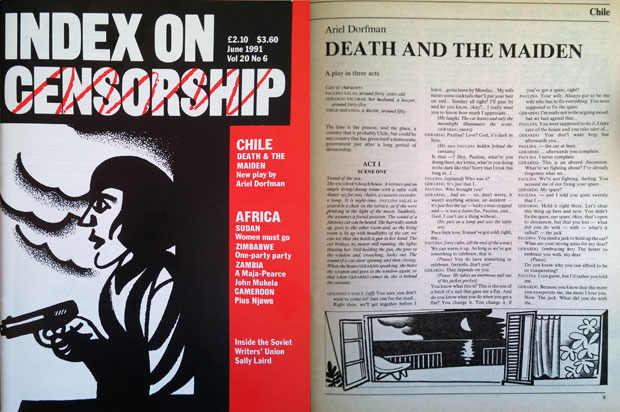 Death and the Maiden, Ariel Dorfman’s play, was first published in English in the June 1991 issue of Index on Censorship magazine.

Parents and students at a high school in New Jersey have launched a petition to have books, including the play Death and the Maiden by Chilean playwright Ariel Dorfman, removed from mandatory reading lists and be “replaced with material that uses age appropriate language and situations”.

The petition, directed to Rumson Fair Haven high school, has gathered 222 signatures and asks “the administration institute a policy, whereby parents must sign a permission slip if assigned reading material, films or any media contains profanities, explicit sexual passages or vulgar language”. It has prompted a counter-petition, stating that “banning books will only educate students to be more ignorant and dismiss ideas that are ‘not appropriate’ or disagree with one group’s ideas”, which has already overtaken the original petition with 753 signatories.

The calls to remove the book have coincided with Banned Books Week (September 27 – October 3), which celebrates freedom to read and aims to draw attention to censorship of books.

Death and the Maiden was published in English for the first time in the summer 1991 issue of Index on Censorship magazine, and Dorfman’s short story Casting Away was published in the magazine’s September 2014 issue. The writer was forced to leave Chile in 1973 after the coup by General Augusto Pinochet. His life in exile has been very influential in his work as a novelist, playwright, academic and human rights campaigner.

Dorfman told Index: “For someone who has seen his books burnt on television by Chilean military, it is disturbing to witness the attempt in the United States to suppress the views of an author who explores the aftermath of what those military and their allies wrought, the way in which they burnt more than books, the way in which they seared the bodies and the minds of anyone who opposed their overthrow of Chile’s democratically elected government. One of the central issues in my play is the fear and silence that the protagonist, Paulina, has to deal with after she was imprisoned, raped and tortured. To silence the play in which she appears is to be an accomplice of that fear and to spread that fear to those readers and spectators who are trying to understand victimhood and how to survive it, how to heal both individually and as a society. Something that the United States must face, just as Chileans have.”

He added: “The government of General Augusto Pinochet deemed many books, many words, many thoughts, to be ‘inappropriate’. I am saddened by the attempt of some in America to be accomplices, however unwittingly, of that persecution of what they deem profane. And I am encouraged and gladdened to see so many comments to the petitions that stand up for freedom from censorship and the opening of young minds, helping the youth of tomorrow to create a world where the Paulinas – and so many others – will not be subjected to violence because of their beliefs. A world where my wife Angelica and I and our children would not be forced into exile or hear from afar news about the death of our friends in concentration camps.”

Free thinking: Reading list for the Cambridge Festival of Ideas 2015

Judy Blume and her battle against the bans