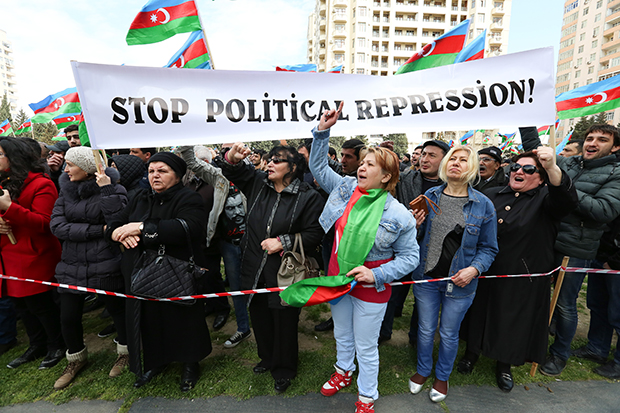 Azerbaijani citizens are set to go to the polls this Sunday to vote for their representatives in 125 parliamentary districts, but this process will be far from democratic. This country has not held a democratic election for more than 20 years, and Azerbaijan’s parliament, the Milli Mejlis, is little more than a rubber-stamping body. These elections also take place against a backdrop of unprecedented repression as well as recent criticism from international bodies.

“On the eve of parliamentary elections, when independent voices are crucial for having an informed debate about the country’s direction, Azerbaijani citizens will especially suffer from the silence their government has imposed,” Santos said.

A recent European Parliament statement said it expressed its “serious concern as to whether the conditions are in place for a free and fair vote on 1 November 2015, given that leaders of opposition parties have been imprisoned, media and journalists are not allowed to operate freely and without intimidation, and a climate of fear is prevalent”.

In addition to the OSCE parliamentary assembly, the OSCE’s office for democratic institutions and human rights as well as the European Parliament have also taken the unprecedented step of cancelling their election-monitoring missions to Azerbaijan.

There are now dozens of political prisoners in Azerbaijan, including prominent journalists, bloggers, human rights defenders, politicians, youth activists, and others who dared to express opinions critical of the ruling regime. Young journalist Rasim Aliyev, Institute for Reporters’ Freedom and Safety chairman, was tragically murdered in August, and there appears to be no hope of  justice in his case. Independent media continue to be ruthlessly targeted, in particular online television station Meydan TV, whose staff and their relatives have been facing extensive pressure ranging from threats to detention.

As detailed in a new report from the Sport for Rights campaign group, No Holds Barred: Azerbaijan’s Human Rights Crackdown in Aliyev’s Third Term, this brutal crackdown started with the re-election of President Ilham Aliyev to a third term  in October 2013. In the two years that followed, the Aliyev regime aggressively targeted its critics, starting with those who told the truth about that fraudulent election, then moving on to the human rights defenders working to defend the rights of those political prisoners.

Although the election’s results may be a foregone conclusion, they do have political significance for Azerbaijan’s international relations. As the Sport for Rights’ report details, during Aliyev’s third term Azerbaijan’s relations with key international bodies have sharply deteriorated – in particular, the OSCE and the European Parliament.

This move was a serious blow to the Aliyev regime, which needs international observers to lend an air of legitimacy to what can only be an illegitimate vote.

The Aliyev regime should think carefully about how to proceed, before this damage to its international relations becomes irreparable. Something the Azerbaijani leadership does not seem to have realised is that the affirmation it is seeking from these international bodies – and indeed, the good public relations it seeks – cannot be bought. But real steps towards democratic reform would, in turn, generate more positive coverage of the country, not to mention genuinely improve its standing with international bodies.

Whilst it is too late to salvage Sunday’s parliamentary elections, it is not too late for the ruling Azerbaijani regime to right the serious wrongs being perpetrated in the country and to repair its relations with international bodies. Immediately and unconditionally releasing political prisoners would be an excellent – and very welcome – start.

This article was posted on 30 October 2015 at indexoncensorship.org